Thirty-five years ago today a group of 36 pop stars and musicians gathered at a recording studio in London’s Notting Hill to record Band Aid’s single “Do They Know It’s Christmas?”

Released just over a week later amid a publicity frenzy, it entered the UK singles chart at number one and stayed there for five weeks, becoming 1984’s Christmas number one. Since then it has become a festive perennial – one of a handful of classic Christmas songs revived each year. 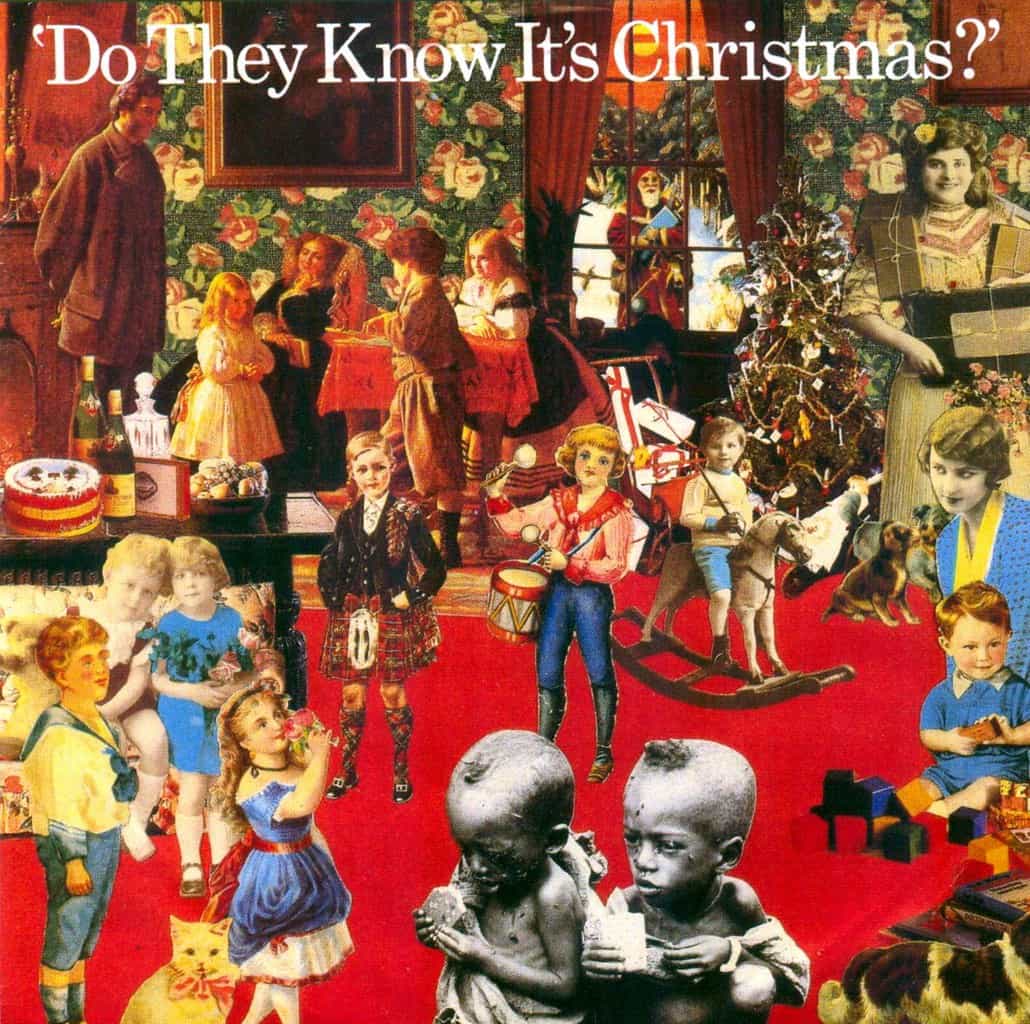 The charity single was the brainchild of Boomtown Rats lead singer Bob Geldof and Ultravox frontman Midge Ure, who together wrote the music and lyrics. They had been moved to act in response to TV reports of the dire famine in Ethiopia and its effects on people there, especially children who were dying of malnutrition.

They had the idea of roping in friends and contacts from the music industry to form a ‘supergroup’ and record the single in one day. The group was dubbed “Band Aid” – a play on words of a brand of sticking plaster. Geldof cautiously hoped the single would raise around £70,000 for the Ethiopia famine appeal, but within 12 months of release it would raise more than £8 million and inspire similar efforts around the world.

While Midge Ure was responsible for the technical side of recording the single, Geldof set about recruiting the biggest pop groups and solo artists of the day to take part. Some of those involved in the recording included U2, Phil Collins, Wham, Bananarama, Spandau Ballet, Heaven 17, Boy George, Duran Duran, Status Quo, Sting, Paul Young, Paul Weller and Kool & the Gang.

All the artists gave their services free, gathering at the Sarm West Studios in Notting Hill on Sunday November 25th, 1984. Geldof had already announced his plans in a BBC Radio 1 interview so the press was gathered outside to photograph the stars coming and going throughout the day. The Daily Mirror newspaper was also given exclusive access inside the studio, ensuring it would publicise the single in the weeks to come.

Before recording got under way, the Mirror photographer took a ‘team photo’ of the supergroup that would be widely used and appear on the reverse of the single’s cover. To get everyone involved from the start, the end of the song was recorded first, with the whole group singing the refrain “Feed the word, let them know it’s Christmas time” over and over again until it was complete.

Particular vocalists were then selected to record sections of the lyrics, each taking their turn, either individually or in small groups. Several later admitted to being unusually nervous when performing in front of so many of their peers, including Spandau Ballet vocalist Tony Hadley who was the first to have a solo spot. As the day wore on, and the drink flowed, the recording session became somewhat chaotic, but Midge Ure managed to keep order in the recording booth.

One of the last to record their lyrics was Culture Club frontman Boy George, who had flown in on Concorde from New York to take part.  The track also features drums by Phil Collins, of Genesis, bass guitar by Duran Duran’s John Taylor and keyboards by Midge Ure, who stitched the whole thing together with producer Trevor Horn, who owned the Sarm West Studios. The recording was also filmed to produce a video to accompany the single.

All those taking part gave their time for free and Geldof vowed that every penny made from the single would go to the famine appeal. Most record retailers agreed to sell the single at its cost price of £1.35 without adding a profit margin, but a row broke out when the Government refuse to waive VAT on sales of the record. In the end it relented, donating an amount equal to VAT collected on the single to the Ethiopia appeal.

On its release, and riding on a wave of publicity and radio airplay, the record became the fastest selling single in UK chart history, selling a million copies in the first week alone and passing the three million mark on the last day of 1984. To date, it has sold almost four million copies in the UK and in 2012 came in sixth place in an ITV poll to find ‘The Nation’s Favourite Christmas Song’. It also spawned various charity spin-offs, including Comic Relief and the legendary 1985 ‘Live Aid’ concert.

In the 35 years since the original, the song has been re-recorded three times – in 1989, 2004 and 2014 – each time raising money for charity appeals and on all three occasions reaching number one in the charts. These updated versions have been recorded using the same ‘supergroup’ format, but each with the biggest pop stars at the time of their recording. To see a video of the original 1984 version of Band Aid’s “Do They Know It’s Christmas?”, click here.