Siblings who excel at sport are unusual, but not unknown; think of footballers Bobby and Jack Charlton, triathletes Alistair and Jonny Brownlee, tennis players Andy and Jamie Murray or rugby players Tony and Rory Underwood.

But born 100 years ago today were two outstanding cricketers who were not only brothers, but identical twins. Alec and Eric Bedser were born in Reading, Berkshire, on July 4th, 1918. Their father, a bricklayer by trade, was stationed there while serving with the RAF during the First World War. 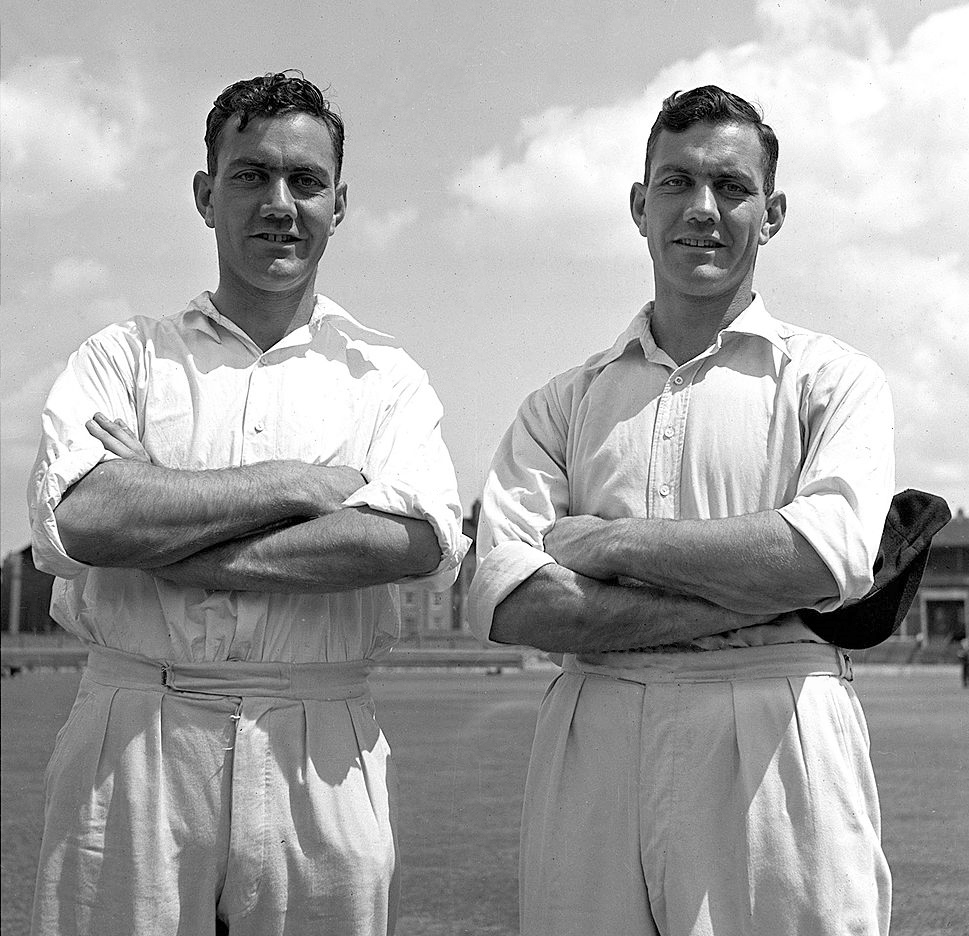 Many twins, even identical ones, differ in their personalities and the paths their lives take, but not the Bedser boys. They would be inseparable throughout their lives, often dressing identically, serving in the military together, sharing a house and excelling at cricket.

When the family moved to Woking, in Surrey, the boys helped their father build a house which they would share for the rest of their lives. They played their first organised cricket at the age of seven, later playing for their school and the local Woking Cricket Club. They also played football at school, both as full backs, and grew up tall and strong, standing 6ft 3ins tall and weighing just over 15 stone.

On leaving school the brothers became clerks at the same firm of solicitors in London. They were spotted practising in the nets at Woking Cricket Club by Alan Peach, the coach for Surrey County Cricket Club, who soon recruited them to the staff at the county side’s home ground, The Oval. They were both medium-fast bowlers, but realising that could be difficult playing for the same team, the story goes that on a toss of a coin, Eric (who lost) switched to off-spin bowling, at which he soon became very adept.

The Bedser boys made their first-class debuts for Surrey in the same match in June 1939, but another deadlier contest was looming in Europe which would temporarily halt their cricketing careers. At the outbreak of war, they joined the RAF police, serving in France and being evacuated from Dunkirk. They served together throughout the war, including in North Africa and Italy.

When Eric was promoted to Warrant Officer, Alec refused a similar promotion because it would mean them being split into different units. Instead he remained a Flight Sergeant so they could continue to serve together. They were demobilised in 1946 and returned to cricket at Surrey.

While both had long and distinguished cricketing careers, it was Alec who enjoyed the greater success, playing for England in 51 test matches between 1946 and 1955 and taking 236 wickets. He spearheaded England’s bowling in the post-war years, alongside his 21-year county career with Surrey. Although Eric played only once for his country, he enjoyed a 23-year first-class career with Surrey and was a member of the team which won seven successive County Championships from 1952 to 1958.

There is a story that during a 1946 match between Surrey and an England representative side, the Bedser twins shared an over, with Alec bowling the first three balls before surreptitiously switching to Eric, who finished the over. Batsman Frank Woolley couldn’t tell the twins apart and if either umpire noticed, they chose to play along with the ruse. On another occasion, when Alec was run out in a match, Eric followed him at the crease, but the umpire refused to allow him to ‘bat again’ until Alec was recalled from the pavilion for purposes of comparison.

Another story goes that during an Australian tour, Eric had his hair cut by a barber in Sydney. Ten minutes later, in walked an identically-dressed Alec and sat in the astonished barber’s chair, telling him not to use any oil this time as it made his hair grow back too quickly!

After retiring from professional cricket, both brothers maintained strong links with the game. Alec became a selector for England, managed two England tours and was made president of Surrey in 1987. Eric served on various committees at Surrey and became its president in 1990. The only thing which separated them was in national honours for their services to the game, with Alec’s more illustrious England career earning him an OBE in 1964, a CBE in 1982 and a knighthood in 1996. He was the first, and remains the only, England bowler knighted for his services to cricket.

Away from the game, the twins went into business together, co-founding a successful stationery firm which was taken over by Ryman in 1977. Neither brother ever married, but continued to share the family home in Woking and even had a joint bank account. Eric died in his home town in May 2006, at the age of 87, while Alec also died in hospital in Woking after a short illness in April 2010, aged 91.