In a remarkable lapse of royal security, an intruder was able to break into Buckingham Palace and spend several minutes sitting on the astonished Queen’s bed early on June 9th, 1982.

The intruder, 33-year-old father-of-four Michael Fagan, was an unemployed decorator and petty criminal who claimed he had also broken into the royal palace a month previously. Fortunately, it appeared that, despite suffering mental problems, he had no intent to harm anyone, least of all the Queen. 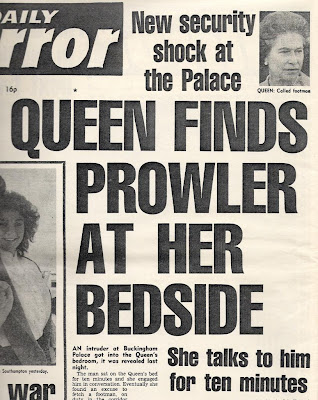 According to his own account, Fagan first broke into Buckingham Palace in June, scaling a high boundary wall then shinning up a drainpipe to enter through an open window. He claimed to have spent at least half-an-hour wandering the corridors and going into various rooms. He ate cheese and crackers he found in a pantry, sat on the royal throne and viewed various valuable royal portraits.

After drinking half-a-bottle of wine he relieved himself in a dog’s water bowl he found in a room used by the Queen’s corgis. Eventually he became tired and was leaving when he startled a housemaid, who called security. When guards arrived he had already gone, leaving them to believe the housemaid was mistaken.

About a month later, on July 9th, Fagan decided to visit the palace again. His wife had just left him and he was struggling to sleep. At around 7am he again scaled the palace’s 14ft high perimeter wall then shinned up a drainpipe to enter through an insecure window. This time he headed for the private royal apartments, whose doors were marked with the names of their occupants. Finding the Queen’s apartment unguarded, he went inside.

By chance, Fagan arrived just after the armed police officer guarding her door had gone off duty. His replacement had been taking the dogs for their early morning walk and was not yet in place. Fagan spent several minutes exploring the Queen’s anterooms, where he broke a glass ashtray and cut his hand while picking up the pieces. He was still holding a fragment of the glass when he entered the bedroom where Her Majesty was sleeping.

She was woken when he disturbed a curtain and, despite her surprise at finding a scruffily-dressed, barefoot stranger in her room, she managed to remain calm. Initial reports suggested Fagan sat on the foot of the Queen’s bed and talked to the monarch for around 10 minutes before she was able to raise the alarm. But in a 2012 interview, Fagan said the Queen left the room almost straight away and phoned the palace switchboard from her anteroom to alert the police.

Despite phoning twice, no police officers arrived. Fagan then casually asked for a cigarette, which was brought by a maid who had been cleaning a neighbouring room. Shortly afterwards the duty footman arrived and held Fagan – who made no attempt to resist – until the police turned up. The Queen remained calm throughout and engaged Fagan in conversation so as not to alarm him.

After his arrest Fagan was not charged with trespassing in the Queen’s bedroom, which was then a civil offence. He was charged with stealing the wine, but that charge was later dropped when he was committed for psychiatric evaluation. He was sent to a top security mental health hospital in Liverpool, as a patient rather than a criminal, and spent the next six months there before being released in January 1983.

Despite the national outrage that a mentally unbalanced man could gain access to the Queen’s bedroom carrying a piece of broken glass, Fagan’s mother told a reporter he would never have hurt her: “He thinks so much of the Queen,” she said, “I can imagine him just wanting to simply talk and say hello and discuss his problems.”

Not surprisingly, the incident sparked a major and comprehensive review of security at Buckingham Palace and other royal residences. It emerged Fagan had tripped a number of alarms, but because they were unreliable, prone to false alarms and often set off by members of the palace staff, they had been silenced without further investigation.

Fagan enjoyed a brief spell of notoriety and in 1983, following his release, recorded a punk rock version of “God Save the Queen”. Two years after breaking into the palace he was given a three-month suspended prison sentence after attacking a policeman in Wales. In 1987 he was convicted of indecent exposure after running around a piece of waste ground in London with no trousers on, and in 1997 he was jailed for four years after a conviction for conspiracy to supply heroin.