For the first time in the history of the Olympic Games, a perfect score of 10 was awarded in gymnastics on July 18th 1976.

It was given to 14-year-old Romanian gymnast Nadia Comaneci, who would go on to receive a further six perfect 10s on her way to winning three gold medals at the 1976 Montreal Summer Olympics, setting the world of gymnastics alight. 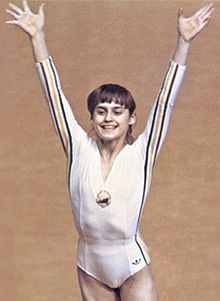 Born in November 1961 in a small town in the Carpathian Mountains, Nadia began gymnastics while she was still in kindergarten and was chosen at the age of six to attend an experimental gymnastics school set up by coach Bela Karolyi and his wife Marta. He firmly believed he could train world class gymnasts if he had them from a young age and spotted Nadia and a schoolfriend turning cartwheels during playtime at their school.

He recruited both girls after speaking with their parents ­– the other would later become one of Romania’s top ballerinas. By 1970, at the age of nine, Nadia was competing for her home town team and became the youngest gymnast ever to win the Romanian Nationals, competing in her first international event the following year.

Over the next few years she enjoyed continued success competing as a junior in numerous national events. Her first major international success was at the 1975 European Women’s Artistic Gymnastics Championships, held in Norway. At just 13, she virtually swept the medals board, winning the overall championship with gold in every discipline except the floor exercise, in which she was second.

Further success came at the inaugural American Cup in March 1976, where she received rare perfect 10s for her vault and floor routine. A score of 10 signifies a ‘perfect’ routine in which the judge awarding the score can find no fault which merits any deduction.

By the time of the Montreal Olympics, in July 1976, the gymnastics world was well aware of the remarkable young Romanian, but she was hardly known outside the sport – something which was about to change. She would receive seven perfect 10s, four of them on the uneven bars.

It was the first time that a 10 score had been awarded for any gymnastic routine in Olympic history and catapulted the shy 14-year-old to international stardom. She won gold medals for the individual all-around, the balance beam and the uneven bars, also taking a bronze for her floor exercise and silver as part of the team all-around.

Over the next few years she continued to dominate women’s gymnastics, setting new standards and inspiring thousands of girls around the world to take up the sport. At the 1980 Olympic Games in Moscow she won two more gold medals, one for the balance beam and the other for her floor exercise, in which she tied with her main rival, Soviet gymnast Nellie Kim.

Several nations, including the USA, boycotted the Moscow games over the Soviet invasion of Afghanistan. There was also controversy over the scoring, with claims it favoured Soviet athletes, and Comaneci’s coach, Bela Karolyi, was caught on camera protesting that she was scored unfairly. It caused trouble for him and his wife with the Romanian government, which felt he had humiliated them, and set in motion a series of events which would directly influence Comaneci’s future.

The following year Comaneci was sent on a “Nadia ’81” tour of America with other gymnasts and her coaches. On the last day of the tour, the Karolyis, unhappy at their treatment in Eastern bloc Romania, defected to the United States, causing a major embarrassment for the Romanian government. After that, Komaneci’s travel was severely restricted over fears she might also defect.

She was allowed to attend the 1984 Los Angeles Olympics as part of the Romanian delegation, but was closely watched at all times. She did not compete but was there officially as an ‘observer’, unofficially to help coach the new generation of young Romanian gymnasts. That year the women’s gymnastics was dominated by American Mary Lou Retton, coached by none other than Bela Karolyi, but Comaneci was allowed no contact with her old coach and mentor.

Although Comaneci previously harboured no thoughts of defecting, her harsh treatment after Karolyi’s defection, and even more so after she retired from competition, helped change her mind. In 1989 she was secretly smuggled out of Romania, across Europe and eventually to the USA, where she has lived ever since. Though she didn’t know it, her defection came just a few weeks before the Romanian revolution, which toppled its Communist leader Nicolae Ceausescu.

In 1996 Comaneci married American former gymnast Bart Conner and the couple have a son, Dylan. Now a joint citizen on the USA and Romania, Nadia Comaneci remains a well-known and influential figure in the world of gymnastics and an active fundraiser for several charities.