After four days of a widespread strike by busmen throughout the English regions, things were starting to turn nasty on July 23rd, 1957.

About 10,000 busmen – drivers, conductors and even some inspectors ­– walked out on strike in pursuit of a pay claim. They wanted an extra £1 a week in their pay packets, but up to that point the employers’ highest offer had been just a fraction of that, at three shillings per week (for the post-decimal generation, there were 20 shillings in £1). 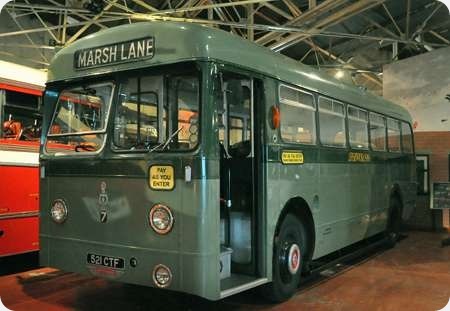 The strike was called by the Transport and General Workers Union (TGWU) and affected provincial busmen around England – those working in mostly rural areas ­ – as opposed to municipal busmen who worked in larger towns and cities and had different rates of pay. Even so, a significant number of municipal busmen also came out on unofficial strike, partly to support their provincial colleagues, but also because they too wanted better pay deals from their employers.

Just a few years earlier, a national bus strike on this scale would have crippled the country, but times were changing. By the late 1950s private car ownership in Britain was rising steeply and the strike prompted a new phenomenon among commuters – car sharing. Colleagues got together to travel in a single car, sharing the fuel costs.

The trains were still running and in some areas saw passenger numbers up by a quarter on the first day of the strike. Some large employers hired private coaches to shuttle their staff between their workplace and the railway station. It was also summertime, so many of those who could feasibly cycle to work dusted off their old bikes and put some air in the tyres. Most schools had already broken up for the long summer holiday, so schoolchildren weren’t relying on the buses either.

All in all, by four days in the strike was clearly not having the impact the union had hoped, which only served to frustrate some of the strikers. To make things worse, some busmen opposed the strike and turned in for work as usual, allowing many bus companies to run limited services. It was these strike-breaking busmen who found themselves the target of the strikers’ frustrations.

On July 23rd, several cases of physical assaults on drivers and vandalism of their buses – including those with terrified passengers on board – were reported in the national press. In Derbyshire a bus driver was hospitalised after being hit in the stomach with an iron bar. In West Yorkshire, another driver told how his bus was halted on the road and he was pulled from the cab.

“I was hit in the mouth and kicked in the stomach,” said the driver, Harry Davies. “While I lay on the ground they smashed the windows and headlights.”

Responding to the allegations of violence, TGWU spokesman Frank Coyle would not admit any of his members were responsible. He told reporters: “I have no comment on that because I have heard it only from the Press, but I am sure our members are not involved.”

News of the violence weakened public sympathy for the striking busmen, leading to new hints from the union that it was open to negotiation. The following day the deadlocked dispute was referred by the Government to the Industrial Disputes Tribunal for independent arbitration. Up to that point the Government had been reluctant to get involved, but now saw no other option.

On July 26th the tribunal made a ruling awarding the provincial busmen a pay rise of 11 shinning per week, just over half their original demand. With the strike having limited impact and public support for the strikers waning, the union had no real choice but to accept, and the strike ended.

A week later, the municipal drivers on unofficial strike also returned to work after their employers offered the same 11 shillings per week pay rise. Once the dispute was over, 11 Conservative MPs tabled a motion in the Commons for a full inquiry into the violence, but it fizzled out as the summer wore on and things got back to normal.

In the long run, the strike probably did the busmen more harm than good. Many of those who made alternative arrangement for getting to work continued with them and didn’t return to the buses. Others resolved to invest in their own transport, with sales of small cars and motorcycles continuing to rise. The days when rural Britain relied heavily on its public transport were coming to an end.