A British attempt to make the first crossing of the Atlantic by balloon was running into trouble 40 years ago today.

Intrepid balloonists Don Cameron and Major Christopher Davey reported they were “limping along” after their experimental 90ft tall helium-filled balloon, named ‘Zanussi’ for its sponsor, developed a leak. They were still optimistic of making landfall in Cornwall, but admitted it would be touch and go. 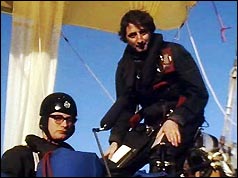 Up until then everything had been going well. After taking off from St John’s, Newfoundland the previous day, the pair climbed high into the jet stream and made good progress, covering more than 1,500 miles in their quest to achieve a world first.

The ‘gondola’ suspended below the balloon and in which the pair were travelling was designed as a floating survival capsule in case they needed to ditch into the ocean, but that was very much a last resort. The balloon’s Glaswegian designer Mr Cameron (39) and fellow pilot Major Davey (34) were about 1,000 miles west of the UK when they first reported a small but steady leak of helium from their bright yellow balloon.

If current conditions remained, they thought they could maintain an altitude of 7,000 feet and speed of 30 knots, hoping to touch down sometime during the next few days in Cornwall, or perhaps France, depending on the wind. Even so, the RAF control centre at Bracknell, Berkshire, which was monitoring their progress, was put on standby for a possible emergency rescue. A spokesman for the centre reported: “They are in trouble… but they are going on.”

By the following day (July 28th), hopes of success were still high as the balloon came within 350 miles of Cornwall and preparations were begun for its landing. Sadly, it wasn’t to be. The following day the balloonists ran into stormy weather, which ripped the small hole in their balloon into a gaping eight-foot gash. It was now losing helium faster than they could replace it, and losing altitude as a result.

Despite jettisoning ballast to reduce their weight, the balloon finally collapsed into the sea on July 30th, just 110 miles short of the French coast and with the record almost within their grasp. Instead the disappointed balloonists covered the final leg of their transatlantic journey by boat, having been picked up by a trawler and taken back to the UK.

Damp, but undeterred, they immediately began making plans to repair the salvaged balloon and make a second attempt, convinced they could make the crossing if the weather, and their luck, held. But those plans were abandoned when a three-man American crew successfully piloted their larger helium-filled balloon, ‘Double Eagle II’, across the Atlantic just three weeks later. They made the crossing from Maine, USA, to Miserey, near Paris in five days, 17 hours and six minutes, landing in a barley field on August 17th, 1978.

Despite their disappointment, Cameron and Davey could at least take consolation in having survived to fly another day. Theirs was the (unlucky?) 13th attempt to cross the Atlantic by balloon in more than a century. Several of those who previously attempted it were never seen again.

He never let go of his transatlantic dream and in 1992 it came true when he flew a balloon of his own design from the USA to Portugal to take second place in the first ever transatlantic balloon race. Another of Mr Cameron’s balloons, ‘Breitling Orbiter 3’, successfully made the first non-stop flight around the world.

He was also the first man to cross both the Sahara and the Alps by hot-air balloon, and the first to pilot a balloon from the UK to the former Soviet Union in 1990 . He has been awarded the bronze, silver and gold medals of the British Royal Aero Club in recognition of his achievements and is one of the very few aeronauts to be awarded the Harmon Trophy as the ‘World’s Outstanding Aviator’, presented to him in 1999.