The notoriously wet British summer made its presence felt on July 30th, 1991, when Luciano Pavarotti, the biggest star in opera, gave a free concert in London’s Hyde Park.

An almost continuous downpour left the 150,000-strong crowd soaked to the skin, yet still enthralled with the seemingly-effortless operatic prowess of the incomparable Italian tenor. 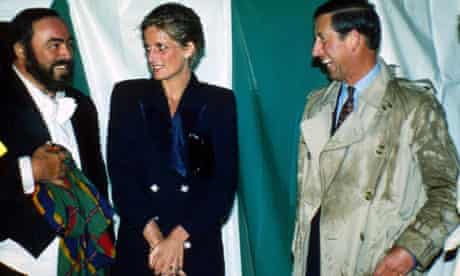 Pavarotti is widely credited with bringing opera to the masses through his rendition of ‘Nessun Dorma’ (‘None Shall Sleep’), an aria from the final act of Puccini’s opera “Turandot”. Previously little-known outside the world of opera, it gained huge popularity after the BBC chose Pavarotti’s 1972 recording as the theme music for its TV coverage of the 1990 World Cup, held in Italy.

It reached number 2 in the UK singles chart and on the eve of the World Cup final Pavarotti gave a stunning live rendition during the first ever “Three Tenor” concert, in Rome. As an encore he performed the aria again, this time taking turns with fellow operatic tenors Jose Carreras and Placido Domingo. The album of the concert was an international bestseller, achieving triple platinum status in the USA alone and eventually outselling all other classical recordings worldwide.

Opera ­– or at least selected highlights from it – had a huge new audience hungry for live concert performance, and its biggest idol was the masterful Pavarotti. He was, of course, no newcomer and the free concert in Hyde Park was staged to celebrate his 30 years in opera. In a demanding programme, even for a much younger singer, he performed 20 arias by the likes of Verdi, Puccini, Bizet and Wagner, many of them familiar even to those not well versed in opera.

Around 250,000 people had been expected, but the appalling weather in the hours before the concert and the discouraging forecast for the evening clearly put many off. Even so, it was the biggest outdoor musical event held in Hyde Park since the Rolling Stones performed there in 1969. Amid frequent downpours, Pavarotti was magnificent.

The only unrest came when people who had paid up to £300 to be in a VIP enclosure at the front of the audience put up their umbrellas as the first downpour started. It caused shouts and chants of “Brollies down! Brollies down!” from the majority of the crowd in the free section, whose view of both the stage and three big screens was blocked by the sea of umbrellas. Some even hurled empty drinks cans, plastic bottles and half-eaten sandwiches at the umbrellas as an encouragement to put them down.

Most of those sheltering beneath them relented and collapsed their umbrellas, instead allowing their expensive suits and gowns to soak up the rainfall along with the rest. By the end of the evening almost 200 wet, shivering and underdressed people had been treated for the effects of cold by volunteers from the St John Ambulance brigade.

Despite the sale of VIP tickets and licensed merchandise, the concert’s organiser Oliver Goldsmith doubted he would recoup much of the £900,000 it cost him to stage it, but he was philosophical about it, saying it was worth it to hear Pavarotti sing. Despite their soaking, the vast majority of those who heard the maestro agreed.

Among those in the VIP section, and getting just as wet as everyone else, were Prince Charles and Princess Diana, leading The Guardian newspaper to comment: “As the last triumphant notes rang out from the aria which Pavarotti gave to the World Cup – Puccini's Nessun Dorma from Turandot – the audience rose in the rain to cheer him to the echo. Prince Charles and Princess Diana were, for once, very much extras in someone else’s great show.”

In a more succinct and no less memorable piece of British journalism, one of Britain’s tabloid newspapers summed up the event with the irresistible headline: “Rain in most arias”.