America found itself the target of co-ordinated terrorist attacks when two of its overseas embassies were bombed within minutes of each other 20 years ago today.

More than 220 people were killed in the embassy bombings in Tanzania’s biggest city, Dar es Salaam, and the Kenyan capital, Nairobi. Most of the dead were civilians, either in a building which collapsed next to the Nairobi embassy, or in the streets outside. 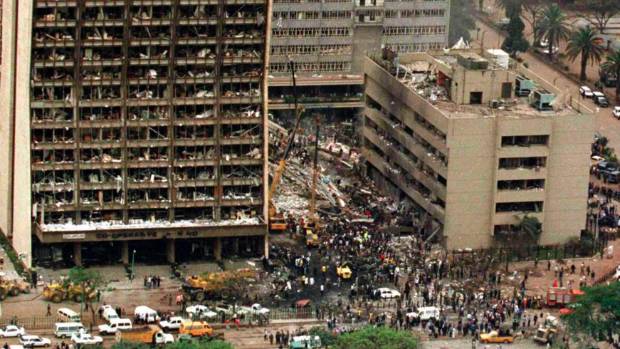 The attacks were planned and carried out by members of ‘Al-Qaeda’, including its co-founder and leader, Osama bin Laden, who was already wanted in connection with other terrorist attacks. It was widely believed that they were in retaliation for America’s involvement in the extradition of four members of Egyptian Islamic Jihad. It prompted a warning from Al-Qaeda that the USA would be repaid for its interference.

At around 10-30am on August 7th, 1998, two trucks laden with explosives were parked directly outside the US embassies in Dar es Salaam and Nairobi and detonated within minutes of each other. The bombs contained TNT, ammonium nitrate fertiliser, oxygen tanks and gas canisters, and were highly destructive. The date was the eighth anniversary of the arrival of American troops in Saudi Arabia (where Osama bin Laden came from) during the early stages of the First Gulf War.

By far the most destructive bomb was the one detonated in the densely-packed streets of Nairobi. Two suicide bombers drove the explosive-packed truck at speed toward the embassy gate and ordered a local security guard at gunpoint to open it. When the guard refused he was fired on and one of the bombers threw a stun grenade at other embassy guards before getting out of the vehicle and running off.

A few moments later the truck exploded, causing damage to the embassy building but the complete collapse of a neighbouring building, which housed a secretarial college and its students. Heat and debris from the blast was also channelled between the buildings into the next avenue, where a packed commuter bus was destroyed and burned.

A total of 213 people were killed in the Nairobi blast and an estimated 4,000 people injured. Many people suffered eye injuries as the stun grenade and shooting brought them to look out of windows, which were then shattered inward by the force of the main blast for almost a half-mile radius.

In Dar es Salaam, the former capital and still biggest city of Tanzania, there was less devastation and far fewer casualties, with 11 people killed and around 85 injured. This was mainly because the US Embassy there was located outside the city centre, set on a large plot and with no immediate neighbours near the gate where the truck bomb was detonated.

A dozen US citizens were killed in the Nairobi attack, including CIA employees and military personnel on security duty, but the death toll among the local populations of the two African countries was far higher at 212, with many more suffering life-changing injuries. American President Bill Clinton condemned the attacks, saying: “These acts of terrorist violence are abhorrent, they are inhuman. We will use all the means at our disposal to bring those responsible to justice.”

He said teams of medics were being sent to the region to help treat the wounded, together with counter-terrorism experts and additional US Marines to bolster security. The United Nations Security Council also passed a resolution condemning the bombings. Less than two weeks later President Clinton announced “Operation Infinite Reach”, a series of cruise missile strikes on Al-Qaeda targets in Sudan and Afghanistan.

A total of 21 suspects were identified as being involved in the embassy bombings. Of these, eight have since been killed in military operations, two died awaiting trial, eight are serving life sentences in the USA and three are still being sought. Immediately following the bombings, Osama bin Laden became one of the most wanted fugitives in the world. He was killed in a 2011 military raid in Pakistan, but not before he was instrumental in planning the even more devastating “9/11” terrorist attacks in America on September 11th, 2001.