Serious concern was growing about security at Britain’s best-known hospital for the criminally insane after a double murderer became the second killer to escape in less than three weeks.

Thirty-two-year-old Alan Reeve broke out of Broadmoor Hospital, in Berkshire, on August 9th, 1981. He used a homemade grappling hook and makeshift rope to scale an 18-foot inner wall, and found it even easier to get over the outer wall – he simply climbed up scaffolding left there by workmen who were repairing it. 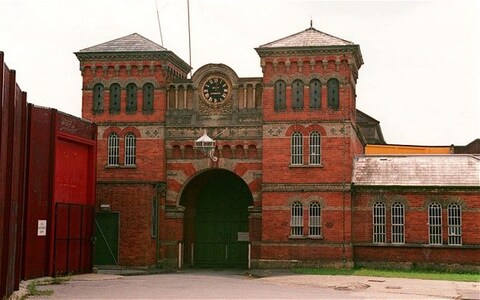 Once over the walls he was met by his girlfriend, who helped spirit him away. His audacious escape came soon after another Broadmoor patient, child killer James Kay, broke out of the supposedly secure hospital using a rope of knotted sheets. Kay gave himself up to police shortly after his escape, realising he would need to spend the rest of his life in hiding and constantly looking over his shoulder, but police were not so lucky in recapturing double murderer Reeve.

He had been sent to Broadmoor at the age of 15 after stabbing then clubbing to death a friend and being found criminally insane. Four years later he attacked and strangled to death another patient inside Broadmoor.

Following his escape, police set up roadblocks across three counties and issues a detailed description and photos of Reeve, warning members of the public not to approach him. A police spokesman speculated that Reeve had outside help, and he was right – his girlfriend not only got him away from the prison, but out of the country.

It was thought Reeve planned his escape to make a point, after Home Secretary William Whitelaw blocked his release from Broadmoor on parole.  He had been inside for more than 16 years and received a favourable psychologist’s report, but Mr Whitelaw was not convinced it was safe to release Reeve and turned down his application for parole.

It seems the Home Secretary’s concerns were well placed, since Reeve would soon kill again. After a year on the run he was arrested in the Netherlands following a gun fight at a liquor store during which he shot and killed police chief constable Jaap Honingh. For this crime he was sentenced to 15 years in prison in the Netherlands, during which time he obtained a law degree. He was released on parole in 1992 after a decade (two-thirds of his sentence) behind bars.

Although he was still wanted in Britain, the Dutch courts refused to extradite him. Instead he returned to his native Ireland where he lived openly with his girlfriend, fathered a son and worked as a typesetter for the Cork Women’s Poetry Circle. Improved relations between the UK and Ireland meant that in 1997 he was arrested in Cork and extradited to England, where he was returned to Broadmoor. However, he would spend only five months there before being released after psychiatrists agreed he was no longer a threat to society.

His escape in 1981 led to a thorough review of security at Broadmoor Hospital, the oldest and best-known of the three high-security psychiatric hospitals in England. Still in use, it houses about 210 male patients. Most of whom have been diagnosed with severe mental illness and convicted of serious crimes, or been found unfit to plead at trial for such crimes. Most patients are successfully treated and released or moved to mainstream prisons after a few years, but several have stayed for over 30 years.

Broadmoor has been home to Ronnie Kray, “Mad” Frankie Fraser, the “Stockwell Strangler” Kenneth Erskine, the self-styled “most violent prisoner in Britain” Charles Bronson (now called Charles Salvador), and “London nail bomber” David Copeland. It was also the long-term home to “Yorkshire Ripper” Peter Sutcliffe, who has been told he will never be released from custody.