A hundred years ago today three shots were fired from a pistol in Moscow which would contribute to the deaths of at least 100,000 people and probably many thousands more.

Those shots were aimed at Bolshevik revolutionary leader Vladimir Lenin (pictured), and almost took his life. It was all the provocation his Bolsheviks needed to launch a deadly campaign of mass killings against their political opponents which would become known as the “Red Terror”. 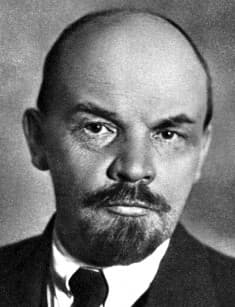 In August 1918, Russia was still in a state of turmoil following the revolutions of the previous year which overthrew the Tsarist empire and led to the rise of the Soviet Union. Most powerful among the revolutionaries were the Bolsheviks led by Vladimir Lenin and Leon Trotsky, but their position was by no means secure.

Also vying for power were several other Communist revolutionary factions, as well as the so-called “White Russians” who favoured the return of the monarchy, possibly alongside some form of democratic political system. It was a tense time, with violence between the competing groups commonplace and the threat of assassination ever present for leaders of the various factions.

It was just such an attempt which took place on August 30th, 1918, with Lenin as the target and disaffected female revolutionary Fanny Kaplan his would-be assassin. At just 28, Kaplan had led a troubled and difficult life. One of seven children born into a poor family, she became a political revolutionary at an early age, joining the Socialist Revolutionaries, one of several emerging groups seeking to overthrow the Imperial Tsarist system.

At 16 she was arrested in Kiev for her involvement in a bomb plot and sentenced to life in a hard-labour prison camp. For the next 11 years she endured appalling conditions, harsh treatment, near-starvation and regular beatings in a series of prisons. She was finally released in March 1917, following the first of that year’s two Russian Revolutions, but suffered from constant headaches and periods of blindness.

Initially elated at the revolution, she soon became disillusioned with Lenin and his Bolsheviks, especially after they began banning and persecuting their political opponents, including her own Socialist Revolutionaries. She came to view the Bolsheviks as more dangerous than the Tsarists they had overthrown, and considered Lenin personally as “a traitor to the Revolution”.

Galvanised by her political beliefs, she acquired a Browning pistol and set out on August 30th for an arms factory in the south of Moscow, where Lenin was addressing the workers. As he left the building Kaplan called out to him and, as he turned, she fired three shots in quick succession. Two struck home, one lodging in his left shoulder and the other passing through his neck, puncturing part of his left lung and stopping near his right collarbone.

With Lenin badly wounded, Kaplan was quickly seized and taken into custody by members of the ‘Cheka’, the first in a succession of Soviet secret police organisations. Under interrogation, she admitted trying to kill Lenin, outlined her reasons for doing so and insisted she had acted alone.

Meanwhile Lenin was rushed to his quarters at the Kremlin, with doctors summoned to treat him. They wanted to take him to hospital to remove the bullets, but he refused to leave the safety of the Kremlin, fearing Kaplan was only one of several assassins sent to kill him. Despite the severity of his injuries, Lenin survived, but never fully recovered his health and. It is thought the wounds he suffered in the shooting contributed to the strokes which first incapacitated and later killed him just six years later in 1924, at the age of 53.

For Kaplan, death came much more quickly. Despite days of interrogation and rumoured torture at the hands of the Cheka, she refused to name any accomplices. On September 6th she was shot in the back of the head in the Kremlin gardens, her body bundled into a barrel and set alight.

But her death was just the first of many thousands. The attempt on Lenin’s life and the assassination of another leading Bolshevik – Petrograd Cheka chief Moisei Uritsky – just days earlier, gave the Bolsheviks the justification they needed to launch an all-out war on their political opponents. Over the next four years, in a period known as the Red Terror, the Bolsheviks and their ‘Red Army’ executed at least 100,000 people, with some estimates putting the total at double that.

Only when the Bolsheviks were firmly established in power at the head of the emerging Soviet Union did the political killings and persecution begin to ease. By then, few opponents remained and those that did were in hiding or exile. Lenin was the all-powerful ruler, but his time was fast running out before Fanny Kaplan’s bullets would finish their deadly work.