In 2012 the imposing headquarters of Britain’s Secret Intelligence Service MI6 was blown to smithereens by a global super-villain bent on revenge… but that was only in the spectacular James Bond film “Skyfall”.

In real life, the iconic London building came under attack on September 20th, 2000, when dissident Irish Republicans fired a Russian-made anti-tank rocket at it. Carried out at 9-45pm under the cover of darkness, it was the first time that the Russian RPG-22 rocket launcher was seen and used in Britain. 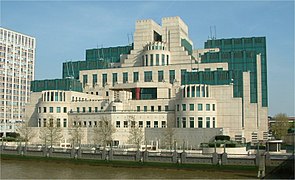 Responsibility for the attack was claimed by the ‘Real IRA’, a dissident paramilitary organisation which split from the Provisional IRA after rejecting its 1997 ceasefire. Three members of the organisation had gone into an area of Spring Gardens, about 300 metres from the MI6 building which is officially called Vauxhall Cross. They used a grassy knoll to fire their missile ­(actually a Rocket-Propelled Grenade) at the building.

It is thought they were aiming for sensitive satellite equipment on the roof of the building, but the missile struck several yards below it, causing damage to a green plated glass window. All outward-facing windows in the building are strengthened and triple-glazed for security while the main structure is both bullet-proof and bomb-proof, which significantly limited the damage. No-one was injured in the attack, although some staff were treated for shock.

Despite the minimal damage, the force of the explosion was considerable. As well as causing some panic on nearby streets, it was felt by people in underground stations and driving in nearby cars. Police immediately sealed off an area between Vauxhall Bridge, next to the Thames-side Vauxhall Cross building, and Lambeth Bridge. Nearby Waterloo Station was also closed for several hours amid fears of a further attack.

A search of the area found the discarded rocket launcher in Spring Gardens, but there was no trace of the attackers, who have never been officially identified. There was no point in them taking the rocket launcher with them because it was designed as a single-use disposable weapon. At only 79cm long, it would have been easy to conceal and transport in something like a gym bag.

The main reason why the attack missed its main target and caused so little damage was because the weapon was fired from too far away. At close range the missile can penetrate a metre of reinforced concrete, but the rocket launcher’s maximum firing range is listed as 250 metres, with an effective firing range of 150 to 200 metres. The Real IRA men were 300 metres from their target.

Even so, the attack sparked concern that terrorists might be in possession of potentially very destructive weapons. Analysis of the abandoned rocket launcher traced it to a cache of weapons in Croatia. It was known that the Real IRA had ordered a stockpile of Russian RPG-22s in July 2000, but they were seized by Croatian police. The one used in London might have been a ‘sample’ used to secure the bigger order, as no more rocket launcher attacks followed.

The Vauxhall Cross building has been the home of Britain’s Secret Intelligence Service since it was officially opened by the Queen in April 1994. It replaced the former MI6 HQ at Century House, on Westminster Bridge Road. Its location, although officially top secret, was London’s worst-kept secret and the 22-story brick and glass office block, with a petrol station at its base, was described as “irredeemably insecure” in a 1985 report.

The new and highly secure Vauxhall Cross building took three years to build and cost more than £152 million. Large parts of it are below street level and the site is rumoured to include a tunnel connecting it to Whitehall, the centre of UK government. Unlike its predecessor, no attempt is made to conceal the purpose of the building.

It has featured in various films and TV series with an espionage theme, including several James Bond films. The first was “Goldeneye”, which premiered just a year after Vauxhall Cross came into service. For “Skyfall” a 50-ft high model of the building was constructed at Pinewood Studios. A special premiere of the film was held at Vauxhall Cross for MI6 staff, who cheered loudly when their HQ was blown to pieces! The thrilling climax of the next Bond film, “Spectre” was played out in the supposed “ruins” of Vauxhall Cross.