Less than a decade after the last steam trains ran on British Rail, passengers got a taste of something exciting and new on October 4th, 1976, with the introduction of the UK’s first High Speed Train (HST) service.

A new diesel-powered InterCity 125 train made the first run from London to Bristol, arriving three minutes early. Very few passengers on board the train realised they were making history as it pulled out of Paddington Station on time at 8-05am, since British Rail chose not to mark the occasion with any official ceremony. 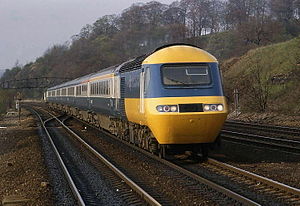 The new generation of high speed diesel locos was being introduced to speed up journey times on mainline routes across the rail network, with the line between London, Bristol and Cardiff chosen as the first to feature the InterCity 125. The streamlined and modern-looking loco took its name from its top operational speed of 125mph, although in trial runs it had recorded speeds of more than 140mph, making it the fastest diesel-powered train in the world.

Each InterCity 125 service used two ‘Class 43’ diesel locos, one at each end of a train of six to nine carriages, depending on the route. British Rail promised to extend the HST service to other major cites over the coming two years.

Several other countries already had HSTs, but almost all were electrically-powered. The cost of electrifying Britain’s rail network was considered too high, so British Rail’s new InterCity 125 service was developed using existing diesel technology.

For passengers, it significantly cut journey times, but there were other differences too. The new carriages were quieter, featured more comfortable ‘airline-style’ seating and had automatic sliding doors at each end. There were plans for an on-board ‘radio telephone’ for business users and even the food was faster, as the buffet car was equipped with a state-of-the-art microwave oven!

For British Rail, there was a lot resting on the introduction of its new HST service. Rising fares over the previous few years, coupled with rising private car ownership and cheap coach fares, had seen passenger numbers fall by up to 20% on mainline routes. It was hoped that introducing the new trains – which would travel at more than 50mph more than the maximum motorway speed – would lure passengers back, especially in the lucrative business market. The cost of a single adult ticket from London to Bristol on the new HST service was £5, equivalent to about £35 today.

An extensive marketing campaign, including new TV adverts, sought to tempt travellers back to the railways, but the new service also had some teething troubles. Running up to its launch, the train drivers’ union ASLEF demanded that the new locos be manned by two drivers when travelling at speeds in excess of 100mph as a safety measure. British Rail insisted it was not necessary and that it would cost £300,000 in over-manning, eventually winning the argument.

As more and more HST services were introduced across the country, passenger numbers did indeed recover and then continue to grow beyond previous levels. In the medium-term at least, the InterCity 125 service became a great success for British Rail, often credited with saving it, but by the 1980s some of the novelty was wearing off and continuing ticket price rises pushed more passengers back onto the roads.

The last of the HST sets (locos and carriages together comprising a train) were produced in 1982, by which time just short of a hundred sets had been built by British Rail Engineering Ltd and put into service across the country.

In 1997 British Rail was privatised and its operations split between more than 100 companies. Some pursued electrification of their regional rail networks to cut running costs, while others sourced new locos and carriages from various private suppliers. Even so, a significant number of InterCity 125s remain in service on parts of the UK rail network.

Those in service with two of the largest operators – GNR and LNER – are due to be replaced with new electric and hybrid electro-diesel trains by the end of 2019, but they won’t necessarily be heading for the scrap yard. Instead they could be sold to other train operators to be refurbished and put back into service, or relegated to run on local routes.

● Click here to see a 1976 BBC news report about the launch of the new InterCity 125 service and one of the TV adverts which promoted it to passengers.