Five people died and many more were injured when an IRA bomb exploded in Brighton’s Grand Hotel on October 12th, 1984, but its primary target, Prime Minister Margaret Thatcher, escaped unscathed.

The hotel was filled with Conservative MPs and high-ranking party officials attending the annual party conference, held that year in Brighton. A large section of the building’s frontage collapsed in the blast, which happened shortly before 3am, but firemen said many lives were saved because the bulk of the solidly-built Victorian hotel remained standing. 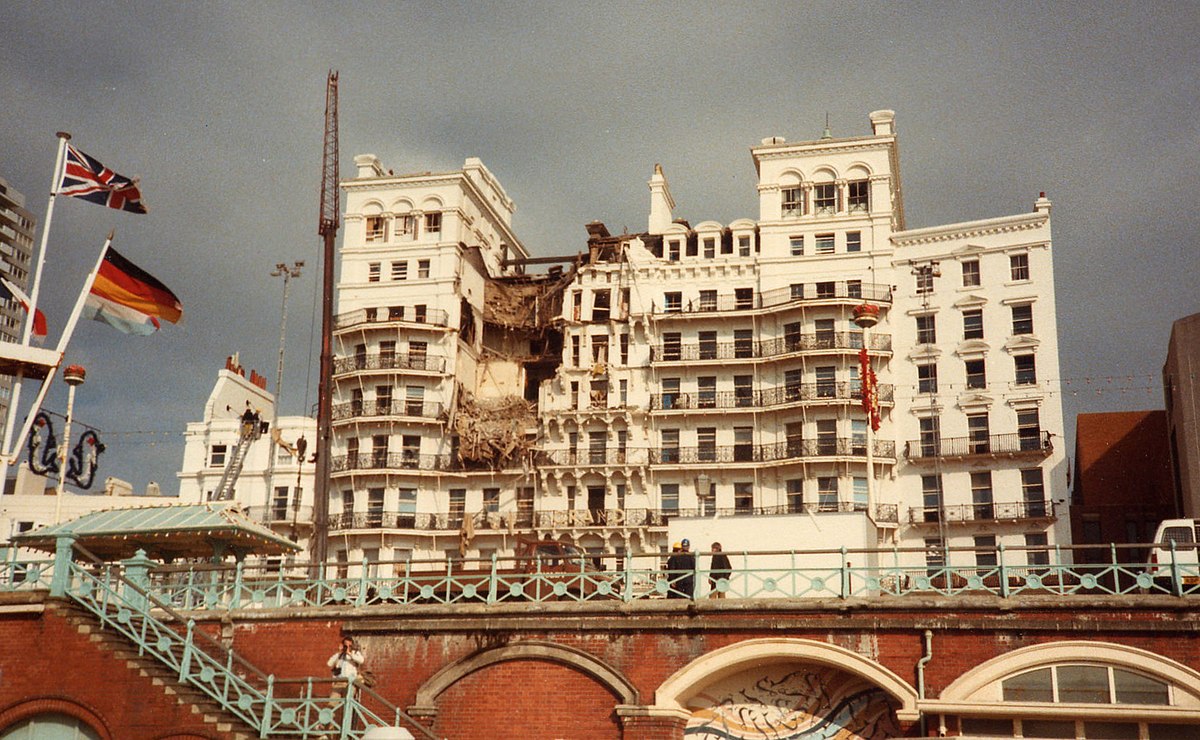 The long-delay time bomb was planted a month earlier in the room one floor above the suite which Mrs Thatcher and her husband, Denis, would occupy during the conference. IRA bomber Patrick Magee booked into the room between September 14th and 17th under the false name of Roy Walsh.

During his stay he carefully removed panels and planted the bomb – comprising 20lb of explosive gelignite and a timing device – under the bath. It was wrapped in cling film to mask its distinctive smell from security sniffer dogs which would sweep the hotel before the conference.

When the bomb detonated at 2-54am it caused a section of the eight-storey hotel to collapse into the basement, leaving a gaping hole in the building’s façade. Mrs Thatcher, who slept for only a few hours each night, was still awake and working on her conference speech in the sitting room of her suite while her husband slept in the adjacent bedroom. The bomb caused extensive damage to the suite’s bathroom, but the sitting room and bedroom were almost untouched.

Both Mrs Thatcher and her husband escaped injury and were able to dress before being led out through the wreckage and taken, for security, to Brighton Police Station. Others were not so lucky.

Several others sustained life-changing injuries, including Sir Walter Clegg, whose bedroom was directly above the explosion, and Margaret Tebbit, wife of prominent Conservative Norman Tebbit, who was Trade and Industry Secretary at that time. He also suffered serious injuries and was trapped in the rubble for several hours.

TV footage of Mr Tebbit being stretchered to safety and clearly in pain was broadcast live several hours later on Breakfast TV. When he arrived at hospital he was asked, prior to treatment for his injuries, if he was allergic to anything. Straight-faced, he replied: “Bombs”.

At about 4am, as Mrs Thatcher left Brighton Police Station, she gave an impromptu interview to the BBC’s chief political correspondent John Cole, vowing that the conference would go ahead as planned. It did indeed open, as scheduled, at 9-30 that morning. One of Mrs Thatcher’s advisors persuaded Marks and Spencer to open early at 8am so that those who had lost their clothes in the attack could buy replacements. Many had been evacuated from the hotel in their nightclothes and were unable to return.

In her hastily rewritten speech, Mrs Thatcher labelled the bombing “an attempt to cripple Her Majesty’s democratically elected Government”. But she added: “The fact that we are gathered here now – shocked, but composed and determined – is a sign not only that this attack has failed, but that all attempts to destroy democracy by terrorism will fail.”

The IRA issued its own statement claiming responsibility for the attack and adding: “Today we were unlucky, but remember we only have to be lucky once. You will have to be lucky always. Give Ireland peace and there will be no more war.”

If anything, the bombing increased Mrs Thatcher’s popularity and her image as the defiant “Iron Lady”, determined to carry on in the face of extreme adversity. Immediately after her conference speech, she travelled to the Royal Sussex County Hospital to visit those injured in the bombing.

Patrick Magee was arrested in June the following year and, three months later, convicted of the bombing and five counts of murder. He received eight life sentences, with a recommendation that he serve at least 35 years, but was released from prison in 1999 under the terms of the Good Friday Agreement. He had served 14 years and a government spokesman commented that his release as part of the Northern Ireland peace process was “hard to stomach”.

Immediately after the bombing, security around the party conference was massively increased, setting a pattern which is now routine for all major political party conferences.