A plume of white smoke blossomed from a small chimney above the roof of the Sistine Chapel in the Vatican City 40 years ago today, signifying to the world that a new Pope had been chosen.

The choice of the 111 Cardinals meeting in the second ‘Papal Conclave’ of that year was a surprise to Catholics around the world. Not only was Cardinal Karol Wojtyla the first non-Italian Pope in more than 450 years, he was also barely known outside his native Poland. Yet as Pope John Paul II, he would become one of the most recognisable and revered heads of the Catholic church in its long history. 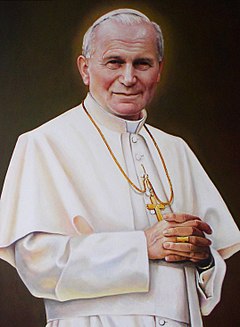 Perhaps one factor in his election was his age. At 58 he was the youngest Pope of the 20th century, and in good health. His predecessor, Pope John Paul I, had only been elected on August 26th that same year, but died suddenly from a heart attack just 33 days later.

Choosing his successor was a drawn-out affair, the second Papal Conclave of 1978 beginning 10 days after the funeral and lasting for three days. There were two strong candidates, both Italian cardinals, but support for each was evenly split and early votes were inconclusive. When it became clear the deadlock would not easily be broken, a number of compromise candidates were suggested, including Cardinal Wojtyla.

He won on the eighth ballot of the three-day conclave, triggering the traditional white smoke which signalled a successful election to the large crowd anxiously awaiting news in St Peter’s Square. The cardinals’ unexpected choice left many international news organisations frantically scrabbling for background information on the new Pope.

Once elected, a new Pope can choose his own ‘regnal name’ – the name by which he will be known throughout his reign. Cardinal Wojtyla chose John Paul II in tribute to his immediate and still-mourned predecessor.

In the early evening the new pontiff appeared on the balcony overlooking St Peter’s Square to address the crowd of around 200,000 gathered there. The fact that he did so in fluent Italian put paid to any fears that the new Polish Pope might not be able to communicate effectively with his fellow clerics and staff in the Vatican.

The crowd roared its approval and the informal humility of his short address, together with his warm smile, gave an indication of his approachable and welcoming style. In his home country of Poland, where more than 80% of the 35 million population were practising Catholics, the news was greeted ecstatically. Under Communist rule, Poland’s Catholics faced often brutal repression and saw the election of a Polish pope as both vindication and reward for keeping the faith.

One of his earliest visits as Pope, in early 1979, was to his native Poland, where millions of people turned out to welcome him. Over the next two-and-a-half decades he would become the most widely travelled Pope in history, visiting 129 countries and traveling more than 1.1 million kilometres. He consistently attracted large crowds, some of them among the largest ever assembled in human history.

He was also the first reigning Pope ever to travel to the UK, arriving in 1982 and greeted by the Queen in her role as Supreme Governor of the Church of England. He became known for kneeling to kiss the ground on first arriving in a new country – a symbolic gesture which won the hearts of people all around the world.

However, he was not universally popular. He took a strong stance against divorce, contraception, abortion, homosexual unions, rights for unmarried couples and the ordination of women, causing critics to claim he was out of touch with the modern world. Just three years into his Papacy, he was lucky to survive an assassination attempt when he was shot and seriously wounded in St Peter’s Square by a Turkish fanatic. After recovering he visited his would-be assassin to talk with him and forgive him.

By the turn of the new millennium, the Pope, now almost 80, was beginning to look frail. The following year he was diagnosed with Parkinson’s Disease and began to have difficulty completing some of his speeches. In 2002 he returned to his native Poland, which was widely interpreted as a farewell visit. In 2005 he underwent an operation on his throat to alleviate breathing problems, but failed to recover and died on April 2nd.

Pope John Paul II has served for 26 years and six months, making him the second longest serving pontiff in modern history. More people around the world saw Pope John Paul II in the flesh than any other Pope before him or since.