A curiously compelling stunt reached its conclusion 15 years ago today, one in which nothing actually happened for weeks on end, but which the world watched anyway.

It involved American self-styled ‘magician, illusionist and endurance artist’ David Blaine, who lived for 44 days in a clear Plexiglas box suspended 30 feet in the air next to the River Thames. Throughout his six-week “Above the Below” stunt, he apparently survived on nothing but 4.5 litres of water per day. 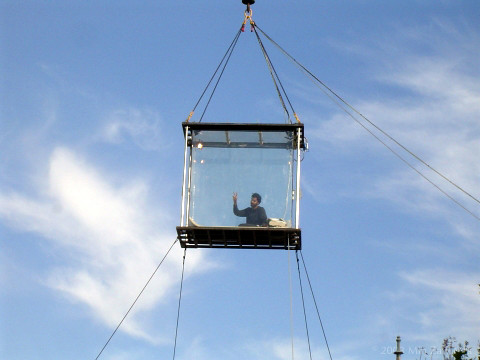 The stunt began on September 5th, 2003, when Blaine entered the seven feet square by three feet deep box and was hoisted into the air by a crane on the south bank of the Thames, close to Tower Bridge. In previous endurance stunts he had been ‘buried alive’ in a plastic coffin for a week, spent 63 hours encased in a massive block of ice, and stood for 35 hours on top of a 100 feet high pillar.

His latest stunt was set to eclipse them all, at least in the length of time involved, if not in sheer excitement value. Hundreds of people gathered to see the stunt begin, amid rumours that 30-year-old Blaine might disappear from the box in a puff of smoke, or it might ‘accidentally’ be dropped into the Thames and he would make a Houdini-like escape in the nick of time.

None of those thing happened. Instead Mr Blaine settled in his box for the long haul, much to the bemusement of passers-by. It was equipped with a webcam so that people all around the world to observe his daily progress by logging on with their computers.

Over the coming weeks it was estimated that more than 10,000 people physically visited the site of the stunt, which became one of London’s most popular tourist attractions. Many were supporters or fans, who shouted words of encouragement or wrote messages on placards.

Others – who were soon dubbed “Blaine-baiters” – went to jeer and mock, some throwing eggs, golf balls and paint bombs at the suspended box and once even flying a hamburger up to taunt him using a remote control model helicopter. Police only intervened when a man climbed up nearby scaffolding in an attempt to cut off Mr Blaine’s water supply.

There were regular updates on the endurance attempt in national newspapers and on radio and TV news programmes, even when there was nothing to report. Because it soon became apparent that nothing was actually happening, other than a man surviving without food in a suspended plastic box. Detractors compared the spectacle to the crowds who used to gather on the opposite side of the river at the Tower of London to watch public hangings.

Some critics claimed it was all a hoax and that Mr Blaine was receiving food, speculating that his water supply contained high-strength nutrients such as dissolved glucose. Finally, after six long weeks, the stunt was over. Again a large crowd gathered and again there were rumours of some kind of spectacular climax, but again, it wasn’t to be.

Instead the box was lowered slowly to the ground and opened, enabling Mr Blaine to walk, somewhat shakily, from his see-through cell. He certainly looked thin and was clearly emotional, telling the waiting crowd: “This has been one of the most important experiences of my life. I love you all!”

He was then put on a stretcher and whisked away to a private hospital, where a team of doctors was waiting to treat him. This ‘refeeding’ phase was probably the most physically dangerous part of the whole stunt. Tucking into a long-awaiting burger and fries could have killed him – instead he would receive a carefully managed programme of liquid nutrients and mineral supplements over the coming days to gradually restore his strength and reactivate his digestive system and vital organs.

Mr Blaine ate his first solid food (a packet of crisps) five days later, on the same day that he was released from hospital. Nutritional expert Professor Jeremy Powell-Tuck said he lost 30% of his body weight during the stunt, was suffering from malnutrition by the end of it and could take up to six months to recover fully. A scientific paper on the effects of his 44-day fast was published in the New England Journal of Medicine and helped to inform future treatment of people suffering from starvation and malnutrition.

Despite people questioning his sanity, Mr Blaine vowed to continue devising and performing death-defying stunts and incredible feats of endurance, all in the name of entertainment.