Fearful of another Communist enclave in the Caribbean, America landed crack troops on the small island of Grenada 35 years ago today in a move condemned by many other world leaders.

Covering just 135 square miles and with a population of around 100,000, the small island north of Trinidad and Tobago seemed insignificant. But when pro-Communist forces staged a coup in October 1983, alarm bells began ringing in the White House. 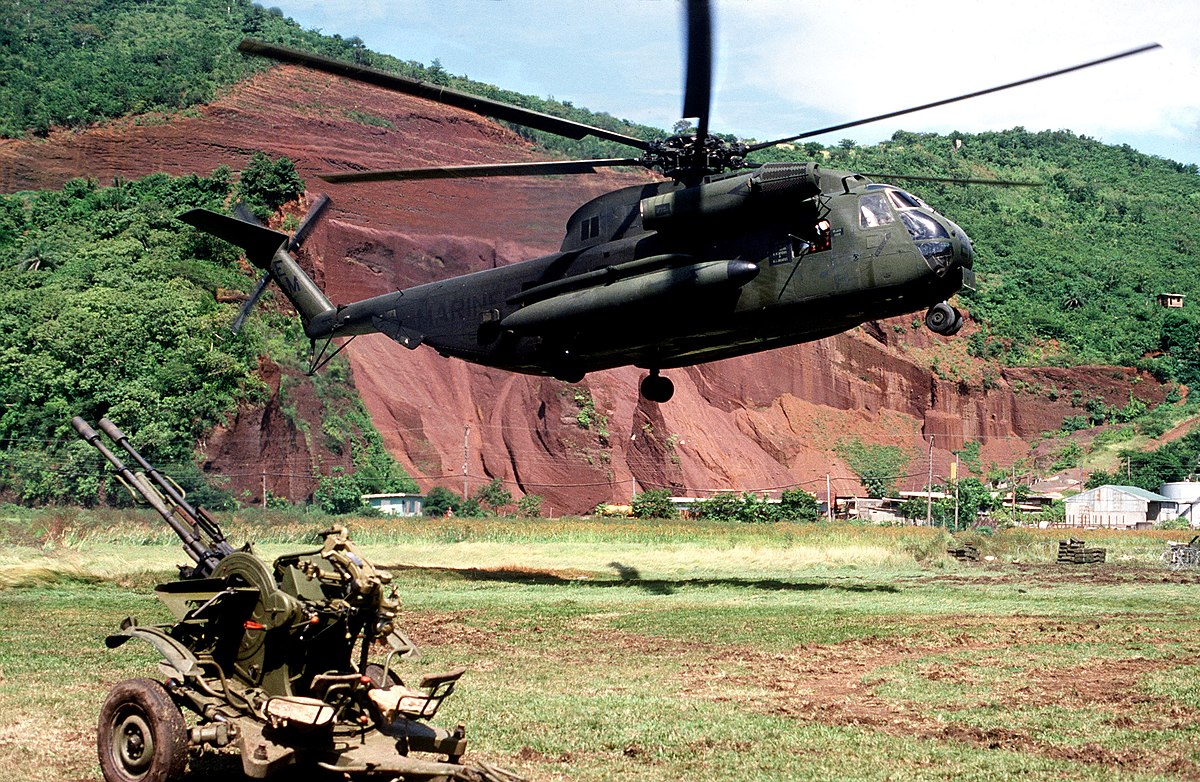 America already had to contend with the much larger Communist-ruled island of Cuba, off the southern tip of Florida, and President Ronald Reagan did not want another potential threat in the Caribbean. It wasn’t the islands themselves that posed a threat, but their links to and support from the world’s other great superpower – the USSR.

Cuba had been the focus of an international crisis in October 1962 when Soviet Russia began preparations to site ballistic missiles there, just 90 miles from the coast of Florida. For almost two weeks the world teetered on the brink of all-out nuclear war until the Cuban Missile Crisis was uneasily resolved.

Grenada seemed to pose a threat because a new 3,000-metre airstrip was being built there, partially using Cuban construction teams. American military analysts claimed the only reason for such a long and heavy-duty runway was so it could be used by heavy military transport planes (from the USSR), even though all the companies involved in its construction said it was for commercial passenger jets.

Grenada, a former French then British colony, gained independence in 1974, with its own democratically-elected government. It was overthrown in a 1979 coup which established a Marxist-Leninist government with close ties to Cuba and, indirectly, the USSR. From that point on, the USA kept a close eye on events in Grenada, but its government ­– headed by prime minister Maurice Bishop ­– made slow progress to becoming wholly socialist. Instead it encouraged private sector development aimed at making Grenada a popular tourist destination.

That angered the island’s hardline Communists, who wanted stronger links with Cuba and the USSR. On October 19th, 1983, they staged another coup, backed by the small Grenadian Army. Bishop was initially placed under house arrest, but freed after demonstrations by his supporters. When he attempted to resume power, he and seven others were captured and executed.

Grenada’s new ‘People’s Revolutionary Army’ then declared martial law on the island and threatened to shoot on sight anyone who left their home without permission during a four-day total curfew. For an already nervous USA it was the final straw. On October 25th it launched “Operation Urgent Fury”, landing the first of around 8,000 troops on the island to quell the Communist uprising and seize control.

The task force comprised elements of all the US military services, including highly trained and well-equipped US Marines and Airborne Rangers, and several ‘special ops’ units. It also contained around 300 soldiers from the Organisation of Eastern Caribbean States (OECS), representing six other Caribbean countries apparently concerned by events in Grenada.

Critics claimed this OECS involvement was a token deployment to legitimise the invasion by America, allowing it to claim it was acting in the interests of other Caribbean nations, especially the Dominican Republic. President Reagan also cited fears for the safety of 600 US medical students on the island as another reason for the military intervention.

The first task force units met with fierce resistance and heavy fighting in some areas, but as more and more US troops arrived over the next few days the defenders either surrendered or fled to the mountains. Early reports suggested more than 600 Cubans and 30 Soviet ‘advisers’ had been rounded up, again seeming to justify President Reagan’s concerns.

Nevertheless, world leaders were outraged by America’s action. Even British Prime Minister Margaret Thatcher, a close ally of President Reagan, said she tried to dissuade him from it. That in turn angered the Americans, who supported Britain during the previous year’s Falklands War.

As peace was restored on Grenada, the death toll was put at 70 Grenadian and Cuban soldiers killed and more than 400 wounded, while US forces sustained 19 killed and 116 wounded. Twenty-four civilians also lost their lives, most of them in the accidental bombing of a mental hospital.

In the aftermath of the fighting, an interim government was established and, with order restored, US troops withdrew from Grenada in December 1983. A year later new elections were held and won by the conservative Grenada National Party, which merged with two other democratic parties to become the New National Party.

Today, October 25th is celebrated as ‘Thanksgiving Day’ in Grenada, a public holiday commemorating the freeing (during the US invasion) of several political prisoners later elected to public office.