One of Britain’s finest actors of the post-war era celebrates his 65th birthday today.

Born on October 26th, 1953, Roger Allam is probably best-known to TV viewers for his portrayal of Detective Inspector Fred Thursday in the “Inspector Morse” prequel “Endeavour”. He has also featured in several other TV series and films, but he is primarily a stage actor, having appeared in more than 60 productions over the past four decades. 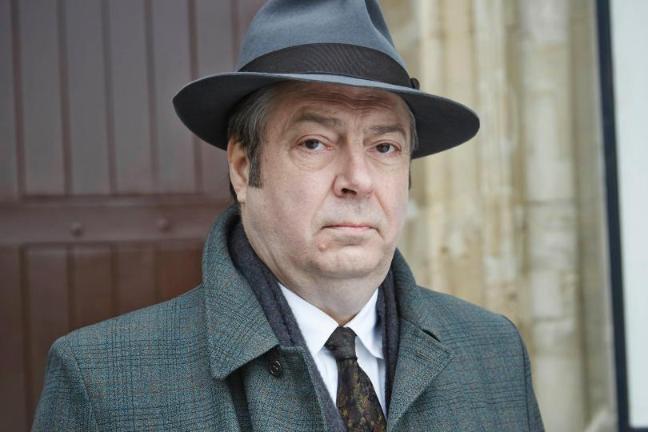 A Londoner by birth, he became interested in drama during his time at Christ’s Hospital School, in West Sussex. After stumbling on a book called “Great Acting” in the school library, he became fascinated by the actor’s art, seeing some of the greats perform in the flesh at the Old Vic, where gallery seats were just 15p.

Studying ‘Hamlet’ at school also left a profound impression and the young Roger Allam soon set his sights on a career on the stage, going on to study drama at the University of Manchester. He briefly considered becoming a professional singer, having taken lessons at the English National Opera, but the acting bug proved stronger.

On graduating he found work as one of only two men in a feminist theatre group, “The Monstrous Regiment”, claiming he got the job because he also played several instruments, which made him a versatile asset to the group. He stayed for two years, until 1978, before gaining more stage experience at the Contact Theatre, in Manchester, and through roles in Birmingham and Glasgow.

It all helped him win a place at the prestigious Royal Shakespeare Company, in 1981, where he soon made his mark. His real breakthrough came in 1983, playing Mercutio in an RSC production of Romeo and Juliet and earning rave reviews from the critics. Two years later, in 1985, he played the character of Inspector Javert in the original London production of the stage musical “Les Miserables”, further cementing his growing reputation.

Other memorable stage roles followed, many of them Shakespearian, and around 1989 he also began taking his first small roles in film and TV. While constantly in demand for stage work, more offers for ‘working to the camera’ followed, including a role as the Queen’s Private Secretary in the celebrated 2006 film “The Queen”. Other notable film roles have included parts in “Pirates of the Caribbean: On Stranger Tides”, “The Iron Lady”, “The Woman in Black” and “The Lady in the Van”.

Just like the greats who first inspired his acting ambitions, Allam had proved himself an extremely versatile performer, able to convincingly portray a wide range of characters. For his stage work he has been nominated four times for the Laurence Olivier Award for Best Actor, winning it twice. The first time was for his portrayal of flamboyant cross-dresser Terri Dennis in a 2001 production of “Privates on Parade”, and the second for his Falstaff in a 2010 production of Henry IV Parts 1 & 2 at Shakespeare’s Globe.

Inevitably, it is TV work which makes an actor a household name and the role which arguably did it for Allam was as DI Fred Thursday, when “Endeavour” began in 2012. The prequel to “Inspector Morse”, telling the story of the dour detective’s formative days in Oxford, was keenly anticipated and Allam was perfectly cast as young Morse’s mentor and guide. Allam had already appeared in several successful TV shows, including “Foyle’s War”, “Waking the Dead”, “Midsomer Murders”, “Heartbeat”, “Spooks” and a 1997 episode of “Inspector Morse”.

He also demonstrated a talent for comedy, playing Peter Mannion in cult BBC comedy series “The Thick of It”, and had a role in the first season of the hugely successful “Game of Thrones”. Fans of radio comedy will also know his distinctive voice from the BBC Radio 4 comedy “Cabin Pressure”, in which he played First Officer Douglas Richardson for four series between 2008 and 2014.

Away from the limelight, he is married to actress and writer Rebecca Saire, and the couple have two sons. As he turns 65, Roger Allam remains an extremely busy and in-demand actor with an enviable reputation in the theatrical world. Today we join with his many fans in wishing him many happy returns.