Denied the chance to fight a general election, Conservative Party leader Iain Duncan Smith was out on his ear 15 years ago today after failing to win the support of his fellow MPs.

During his two years leading the Tories in opposition, Mr Duncan Smith was dogged by doubts over his ‘quiet man’ leadership style and frequent rumours of dissent among backbenchers. He finally challenged his opponents in the party to ‘put up or shut up’, in other words, to gather the 25 signatures needed to trigger a vote of no confidence or to get behind him in opposing Tony Blair’s ‘New Labour’ government. 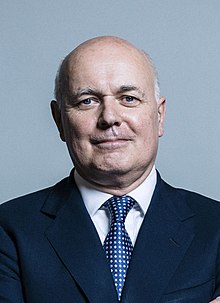 They chose the first option, gathering enough signatures to force a confidence vote on October 26th, 2003. When the result came in shortly before 7pm, it was bad news for Mr Duncan Smith, who lost by 90 votes to 75. Soon afterwards, he emerged from Conservative Party HQ in Smith Square to announce his resignation as leader.

He told reporters: “The parliamentary party has spoken, the announcement has been made and I will stand down as leader when a successor has finally been chosen. I will give that leader my absolute loyalty and support.”

Earlier in the day the former lieutenant in the Scots Guards fought tooth and nail for his political future. In an uncharacteristically passionate half-hour speech to fellow Tory MPs, he urged them to end the bitterness dividing and tarnishing the party. One MP described the speech as “blazingly honest and very direct”, but it was too little too late.

Mr Duncan Smith (often referred to by his initials ‘IDS’) was the first Conservative Party leader directly elected by the full party membership, comprehensively beating rival Kenneth Clarke. There was anger among his supporters that he had now been removed by a small number of MPs plotting against him. Despite claims he lacked charisma, the party also made vital gains in two rounds of local council elections held under his leadership.

One supporter, Bernard Jenkins MP, said of the confidence vote result: “I’m very disappointed for the rank and file of the party. They’re the people who voted for Iain and they must feel their leader has been stolen from them by the parliamentary party.”

Another factor in IDS losing the vote could have been emerging press stories about the salary which he paid to his wife, Betsy, to be his Diary Secretary. Evidence compiled by BBC journalist Michael Crick suggested she did little to justify the salary, triggering a political scandal dubbed “Betsygate”.

A thorough investigation by the Parliamentary watchdog later cleared both IDS and his wife of any wrongdoing, but by then the damage was done and he was no longer party leader. The favourite to take over was shadow chancellor and former home secretary Michael Howard. He stayed silent over whether he would stand, only commenting that: “My thoughts are with Iain Duncan Smith. He has shown fantastic courage and dignity.”

Sure enough, Mr Howard did go for the top job and was elected unopposed as the new party leader on November 6th, with IDS returning to the back benches. Despite initial enthusiasm among Conservatives for Mr Howard’s leadership, he failed to win wider public support. At the next general election, in May 2005, the Conservative again lost to Labour and increased their share of the national vote by just 0.6% on the previous election in 2001.

Admitting his failure, Mr Howard said he would be too old to fight the next general election and announced his intention to stand down as leader “sooner rather than later”. He carried on for another seven months before being replaced by David Cameron, who finally managed to turn the party’s fortunes round, narrowly winning the 2010 general election to become Prime Minister in a coalition government with the Lib-Dems.

Under Mr Cameron, IDS was brought back to the front benches, serving for six years as Secretary of State for Work and Pensions. He unexpectedly resigned from the ministerial role in March 2016 because he disagreed with planned cuts to disability benefits. He then became a central figure in the leave campaign for the 2016 Brexit vote and remains active in Parliament as MP for Chingford and Woodford Green, in Greater London.