A tense standoff at the end of a month-long kidnapping case came to a peaceful conclusion on November 7th, 1975.

The eyes of the world had been on Ireland since October 3rd, when a Dutch industrialist was kidnapped while on his way to work at the wire factory he ran in Limerick. At first there were fears that Dr Tiede Herrema had been killed by the Provisional IRA, but after 18 days he was traced to a house in Monasterevin, in County Kildare. 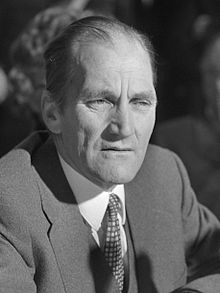 He was being held there by two young IRA firebrands, Eddie Gallagher and Marion Coyle. Both in their early 20s, they demanded the release of three IRA prisoners being held in Limerick Jail in return for the safe return of Dr Herrema (pictured).

They believed the government would give in to protect foreign investment in Ireland and banked on popular support for their kidnapping ploy, but they got it wrong. Instead, the kidnapping of a quiet and respected family man, with no political affiliations and no role in Ireland’s sectarian violence, caused outrage among most ordinary Irish people.

They valued the tradition of hospitality which Ireland extended to visitors and felt it had been violated by the kidnapping. The factory which Dr Herrema ran was also Limerick’s biggest employer, providing livelihoods to around 1,400 people. The kidnapping raised fears that its Dutch owners might shut it down and leave Ireland. Thousands marched through the city of Limerick to condemn the kidnapping.

Rather than storm the house in Monasterevin and risk Dr Herrema’s life, the police instead began a siege of the property that would last a further 17 days and draw international press interest. Negotiations began with the kidnappers, but the authorities made it clear they would not give in to their demands.

Eventually the kidnappers agreed to the unconditional release of Dr Herrema and gave themselves up 43 years ago today, on Friday November 7th. Their victim was tired but unhurt and seemed calm and collected when he spoke at a news conference soon after his release. He told reporters there had been times when he feared for his life, especially during the first 48 hours of his ordeal, but he did not hate his captors, who were about the same age as his own son.

“I see them as children with a lot of problems,” he said. “If they were my own children I would do my utmost to help them.”

He also showed reporters a bullet from the gun which had been held to his head. It was given to him as a souvenir by Eddie Gallagher, just before his release, Gallagher telling him: “This one was meant for you”. Despite Dr Herrema’s empathy for his kidnappers, the courts were not so understanding. Eddie Gallagher was given a 20-year sentence, while Marion Coyle got 15 years, despite both being assured they would get no more than four years during the negotiations for Dr Herrema’s release.

Dr Herrema said he felt the sentences were too long, describing his kidnappers as two young people who did something stupid. He left Ireland soon after his ordeal, but later returned to appear on an episode of TV talk show “Saturday Live”. He and his wife, Elizabeth, were made honorary Irish citizens in 1975 and he was also made a Freeman of the City of Limerick.

Marion Coyle was released from prison on parole in 1985 after serving nine years of her sentence, while Eddie Gallagher was released on parole in 1990, after 14 years. You can hear Dr Herrema and his wife discussing the kidnapping and its aftermath on an Irish radio documentary by clicking here.