Tens of thousands of people with Type 1 diabetes are set to benefit from life-changing glucose monitors becoming more widely available on the NHS in England.

The small monitor, about the size of a £2 coin, is worn on the arm and constantly checks the wearer’s glucose levels, relaying the information to a smartphone app or e-reader. It does away with the need for inconvenient and sometimes painful finger prick blood tests which most people with Type 1 diabetes have used to regularly check their glucose levels and self-manage their condition. 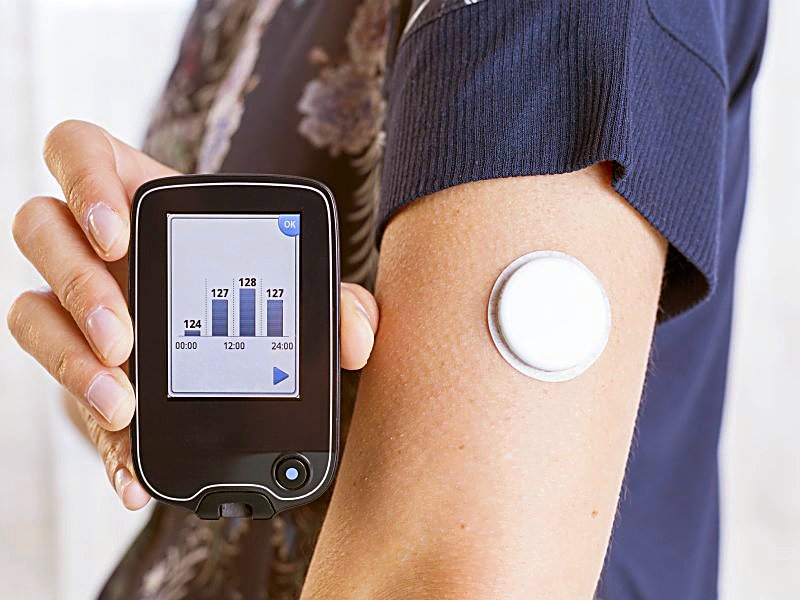 The most high-profile user of the ‘Freestyle Libre’ wearable glucose monitor is the Prime Minister, Theresa May, but so far they have only been available to NHS patients in certain parts of the country, creating a ‘postcode lottery’ in variation of treatment.

Now, NHS chief executive Simon Stevens has announced that all patients who qualify for the wearable monitor under NHS clinical guidelines will be able to get it on prescription from their GP from April next year. His announcement coincides with Diabetes Awareness Month, a worldwide initiative by the International Diabetes Foundation to raise awareness of diabetes.

Mr Stevens said: “Increasingly the NHS is going to be offering patients this sort of technology to help them more easily manage their own long-term health problem. In the NHS of the future, for many conditions you’re going to get NHS support direct from your smartphone or wearable device rather than having to trek to regular hospital outpatient appointments.

“Supporting people with modern tools to manage conditions such as Type 1 diabetes is about to become much more widespread. Innovations such as these also free up time and resources for the NHS as a whole.”

As part of its ‘long term plan’, the NHS is seeking to harness the power of new technologies in empowering patients to better self-manage a range of health conditions, including Type 1 diabetes. Using the Freestyle Libre monitor helps patients to:

The Freestyle Libre device became available for NHS prescription a year ago, but research suggests only 3-5% of Type 1 diabetes patients in England have access to it when up to 25% are eligible under clinical guidelines. This is because some local Clinical Commissioning Groups (CCGs) chose not to prioritise funding for the device due to cost, leading to a ‘postcode lottery’ situation. With new funding released from next April, all 195 CCGs in England should be able to sign up, meaning tens of thousands more patients will be able to use the device.

Chris Askew, Chief Executive of Diabetes UK, said: “This announcement is a huge step forward, and will be welcome news to the many thousands of people with Type 1 diabetes whose lives will now be changed for the better. Once in place, these measures should mean an end to the variation in availability and the postcode lottery that has dogged access to this life-changing technology.

“This decision demonstrates that the NHS is seizing the opportunities presented by new technology, but also that it has listened to the voices of many thousands of people living with and affected by diabetes across the UK. Everyone who has called for fair and equitable access to this technology – through both funding and eligibility criteria – should feel rightly proud that they been heard.”