Optimists across the UK had everything crossed for the first ever National Lottery draw on Saturday November 19th, 1994.

An estimated jackpot of £7 million was up for grabs – that’s around £13.3 million in today’s money – and a £1 ticket bought a one-in-14-million chance of correctly picking the winning six numbers out of 49. Even if you didn’t win the jackpot, lesser prizes were available for anything from three correct numbers to five plus the ‘bonus ball’. 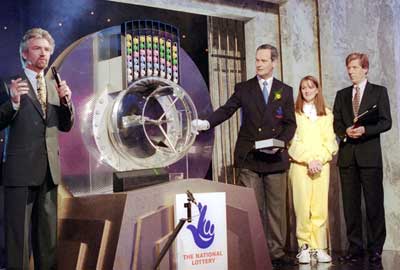 It was something new for the UK and even people who had never gambled before in their lives were enticed to have a weekly flutter, their £1 ticket at the very least buying a short-lived dream of untold riches. Camelot, the company chosen to operate the lottery, said around 16 million players had collectively bought about 45 million tickets in the run-up to the first live, televised draw.

Tickets were available from licensed retailers across the UK, printed out from special lottery machines, but there was anger and frustration in some regions about the initial scarcity of lottery outlets in remote areas. There wasn’t the option to play online back in those days.

The weekly draw would take place during an hour-long prime time Saturday night TV slot, hosted by Noel Edmonds and Anthea Turner and with an expected audience of around 25 million, all eagerly clutching their lottery tickets in sweaty palms. For the first show, 49 contestants (one for each lottery ball) were chosen to take part in an “It’s a Knockout” style competition, with the winner – 18-year-old Deborah Walsh – earning the honour of pushing the button to start the first live draw.

It involved the 49 numbered and coloured balls tumbling around inside a draw machine, with one ball dropping at randomly timed intervals and landing in a transparent display tube until all six winning numbers and bonus ball were chosen. There were four such draw machines, named Arthur, Guinevere, Lancelot and Merlin (in line with Camelot’s ‘Arthurian’ theme), and a machine would be chosen at random each week.

The draw would be the highlight of the weekly entertainment programme which also included things like popstars performing their latest hits and a bizarre section in which astrologer ‘Mystic Meg’ would predict facts about that week’s winners.

The National Lottery was officially launched a week before the first draw, when tickets went on sale, by Prime Minister John Major. He said: “The country will be a lot richer because of the lottery. It is in every sense the people’s lottery.”

The country would benefit because money raised from ticket sales would fund a wide range of projects across the arts, sport, national heritage, charities and even millennium celebrations, at that time still more than five years away.

Behind the scenes, Camelot built a £10 million computer system to manage the weekly draw. As well as randomly selecting the times for each ball to drop during the draw, it had the huge task of checking the winning numbers against all the tickets bought for that draw to determine the number of winners and calculate the prize fund for each winning combination, including the jackpot. It was expected to know within half-an-hour if there was a top prize winner for the draw.

Meanwhile a pool of Camelot employees staffed phone lines awaiting calls from winners of larger prizes. Those winning smaller prizes could simply claim them from their local retailer by handing in their winning ticket to be checked.

As Britain held its breath 24 years ago today, the announcement came that seven lucky jackpot winners would each receive £800,000. That made the total jackpot fund £5.6 million, slightly less than expected due to the high number of players winning smaller prizes that week. In its first year alone, the National Lottery raised £267 million for ‘good causes’ and £154 million for charity.

In the 24 years since that first draw, the lottery has undergone several changes, with the introduction of more draws, including ‘Thunderball’ and the twice-weekly ‘Euromillions’, a range of scratchcards, restructured prize funds and the ability to play online. The entertainment element of the weekly TV show was gradually scaled back as producers realised the only thing people were really interested in was the draw itself.