Twenty-one people died and a further 182 were injured, many of them severely, when bomb blasts ripped through two Birmingham city centre pubs on November 21st, 1974.

Although it has never officially admitted responsibility, it is widely believed that the bombs were planted by the Provisional IRA. A former senior figure in the organisation confessed to its involvement in 2014, but claimed delays in relaying coded bomb warnings meant the pubs were not evacuated in time. 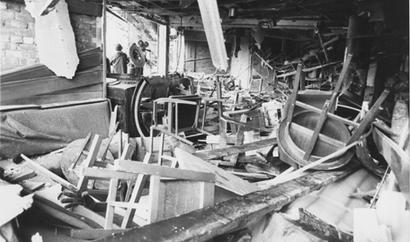 This was at the height of ‘The Troubles’ in Northern Ireland and feelings were already running high in Birmingham, which had an Irish population of around 100,000. Just a week earlier, a 28-year-old IRA member, James McDade, was killed when a bomb he was attempting to plant in Coventry exploded prematurely.

When it emerged that a paramilitary-style funeral was being planned for McDade in Birmingham, local councils moved to ban any such activity and his body was instead flown to Ireland. An extra 1,300 police officers were drafted into Birmingham to quell unrest as the hearse carrying McDade’s body was driven to Birmingham airport.

A week later, it was a busy Thursday evening in Birmingham when a man with a distinct Irish accent telephoned the Birmingham Post newspaper at 8-11pm and said there was a bomb in the Rotunda – a distinctive circular building in the city centre – and another at the tax office in New Street. He used an official IRA code-word to authenticate the warning, but did not name any public houses.

Just six minutes later, the first bomb exploded at the Mulberry Bush, a pub on the lower two floors of the Rotunda. Police acting on the warning call had already begun checking its upper floors, but didn’t have enough time to clear the busy pub at street level.

The bomb, concealed in a bag left close to the pub’s rear entrance, blew a 40-inch crater in the concrete floor and collapsed part of the roof, trapping people under the rubble.  Ten people died in the blast, including two youths walking past the pub in the street outside, and several more suffered horrific injuries, many of them life-changing.

Just a few streets away, patrons at the Tavern in the Town, a basement pub in New Street, heard a ‘muffled thump’, but didn’t realise it was a bomb blast. Police had begun trying to clear the pub, and others in the city centre, when the second bomb exploded there at 8-27pm – 10 minutes after the first. Again, the devastation from the powerful bomb, left near the only entrance to the pub, was horrendous, with nine people killed outright and many more injured. Two more would later die from their injuries, taking the death toll to 21.

As frantic efforts were made to evacuate the rest of the city centre, a third bomb was discovered in the doorway of a Barclays Bank branch. Its detonator was activated when a policeman prodded the bags with his truncheon, but the 6kgs of explosive did not go off.

Horror and outrage at the bombings was immediate and widespread. Most of those killed and wounded were young people aged from 17 to 30 who were just enjoying a night out. Two days after the bombings, the Provisional IRA issued a statement denying responsibility, but this was probably due to growing hostility to the Irish community in Birmingham and other English cities now seen as potential targets.

There was immense pressure on the police for quick arrests, both to fulfil a demand for swift justice and to quell growing unrest and hostility. Those arrests came the day after the bombings, when five Birmingham-based Irishmen were detained at the Lancashire port of Heysham, on their way to attend the Belfast funeral of James McDade. They had left Birmingham’s New Street Station by train shortly before the two timed explosions, waved off by a friend who was also arrested.

Together they would become known as the ‘Birmingham Six’, later convicted and jailed for the bombings, but on the basis of forced confessions beaten out of them and flimsy forensic evidence. They would serve more than 16 years behind bars before their convictions were overturned in March 1991. The real perpetrators of the ‘Birmingham Bombings’ have never been found, although several men have been named as suspects. There is an ongoing campaign for the government to make public all its documents relating to the case.