Born into high society and a friend of the Prince Regent, Hook was a gifted scholar, but dropped out of Oxford University for the life of a playboy and practical joker among London’s upper echelon. 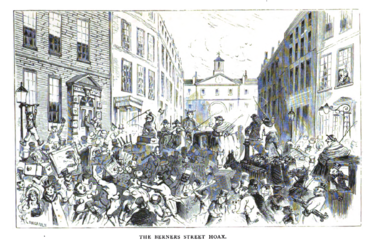 In 1809 he made a small wager with a friend, Samuel Beazley, that he could transform any house in London into the capital’s most talked-about address within a week. His friend chose a well-to-do but otherwise unremarkable house at 54 Berners Street, and Hook set about devising his plan.

Working day and night, he wrote and sent out thousands of letters in the name of ‘Mrs Tottenham’, the supposed occupier of the address in Berners Street. The date of his masterstroke was set for Monday November 27th, and so they could watch it unfold, he and Beazley stationed themselves in the house directly opposite number 54.

It started at 5am, when a chimney sweep arrived to clean the chimneys at number 54. The maid who answered the door told him that no sweep had been requested and that his services were not required. She was in for a busy day.

Within minutes another sweep arrived, then another, and another. There were a dozen in all, each claiming to have been summoned by letter to carry out their work. Just as the last of the sweeps was sent away, a cart arrived bearing a large delivery of coal… then another, and another. As the convoy of coal carts began to block Berners Street, the first cake maker arrived, delivering a large and elaborate wedding cake.

More cakes followed, then came vicars, doctors, lawyers and even priests summoned to minister to someone in the house who they had been told was on their deathbed. By now Berners Street was a chaotic scene, with disorderly queues forming at the door of number 54. Most of those summoned were simply confused, others were exasperated and some were angry, remonstrating with the servants sent to fend them off and with each other. Across the street, two men observed it all in growing amusement.

As the day ground on there was no let-up. Soon the shoemakers began to arrive, then the fishmongers, butchers and every other type of tradesman. The street was already congested when the first of more than a dozen piano deliveries arrived. Even the pianos were outdone when along came ‘six stout men’ labouring under the weight of a pipe organ.

By now they constabulary had been summoned, attempting to seal off Berners Street to the rising flood of tradespeople and deliveries, but that only spread the congestion to neighbouring streets. Even the police could not bar entry to the various high-ranking dignitaries, summoned on various trumped-up premises to attend Mrs Tottenham at her home. Among them were the Archbishop of Canterbury, the Duke of York, the Lord Mayor of London and the Governor of the Bank of England.

By now a considerable part of London was at a standstill. As well as those summoned to Berners Street, a crowd of spectators gathered spontaneously and resisted attempts by the woefully outnumbered bobbies to move them on. As evening fell, a stream of people, all sporting their Sunday best, began arriving for their interviews for the various household posts which they had been invited to apply for. By then the real servants would probably have handed them the jobs!

There was no prospect of the master prankster Hook (pictured right) emerging triumphant from the house opposite to proclaim himself author of the day’s pandemonium and soak up the crowd’s applause. Instead a reward had already been offered for the name of whoever was behind the criminal hoax. Hook and Beazley slipped away from their hiding place, no doubt to the nearest hostelry. He had won his bet. Over the coming days and weeks, news of the bedlam in Berners Street spread rapidly and it did indeed become the most talked-about address, not just in London but throughout Britain.

Hook thought it prudent to lie low for a couple of week then embark on a tour of the provinces until the dust had settled again on Berners Street. Despite the reward, none of his circle of friends – who all suspected Hook was the culprit – gave him up to the authorities. In later years he served briefly as accountant-general and treasurer of Mauritius ­– a handsomely paid job found for him by his friend Prince George. It ended when a £12,000 ‘hole’ was found in the treasury accounts, equivalent to around £980,000 today.

Returning to England, Hook became a ‘man of letters’, penning numerous novels (often of the ‘racy and vivid’ type) and countless volumes of articles and sketches. He continued enjoying practical jokes throughout his life and received the world’s first ‘postcard’, a satirical caricature of postal workers with a penny black stamp affixed to it. It is widely believed that Hook created the card and posted it to himself as a practical joke on the postal workers who would be legally obliged to process and deliver it. In 2002 it sold at auction for a record £31,750.

Theodore Hook died in August 1841 at the age of 52, presumably with a smile on his face. The site at 54 Berners Street is now occupied by a hotel.