Worshippers at a south London church had the shock of their lives on November 28th, 1999, when a naked man burst through the church doors wielding a 3ft Samurai sword.

The nude intruder began to indiscriminately attack members of the congregation during the Sunday morning mass, inflicting horrific injuries with the razor-sharp blade. Eleven people were injured, four of them critically, before the man was subdued. Thanks to the skill of surgeons, no-one died, but one victim needed 20 pints of blood and 20 pints of fluid after having his jugular vein sliced. 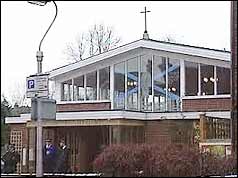 The attack happened shortly after the 10-30am service began at St Andrew’s Roman Ctholic Church in Thornton Heath, Croydon. Initial shock at the intruder’s appearance quickly turned to screams and panic as he began slashing and stabbing at worshippers, including several elderly women and a nun. Some people fled into an adjoining room, where a children’s service was being held, but for others there was no escape.

One parishioner bravely attempted to distract the attacker by thrusting a large brass crucificx in his face, but he was beaten back. In the end it was an off-duty police officer, Tom Tracey, who managed to overpower the attacker. Looking for anything he could use to defend himself, PC Tracey wrenched free a five-foot organ pipe and hit the attacker over the head with it.

“Five minutes previously I was singing the psalm ­– the next thing I was fighting with a sword-wielding madman,” he said.

He and other parishioners were able to restrain the struggling man until emergency services arrived. Ambulance crews were met with a chaotic scene, including several people bleeding profusely from deep wounds. One of the doctors at the nearby Mayday Hospital described some of the wounded as having suffered “the most severe injuries I have seen inflicted on one human by another”.

The attacker was a 26-year-old computer expert who lived opposite the church. He had no recorded history of mental illness, but his wife had tried in vain to get him help for his rapidly declining mental state after he was made redundant. He was later charged with seven counts of attempted murder and six of assault.

When the case came to court in June the following year he denied all the charges, saying he attacked the parishioners because he believed they were demons and God had told him to kill them to save his own wife and five-year-old daughter from eternal damnation. At the conclusion of the Old Bailey trial the jury found him not guilty on the grounds of insanity and the judge ordered that he be detained indefinitely under the Mental Health Act at a secure psychiatric hospital.

He was released less than two years later, although still closely monitored, following successful treatment for paranoid schizophrenia which meant he was no longer considered a threat to the public. However, several of his victims were alarmed to learn he was living in a hostel close to the scene of the frenzied attack.

PC Tracey received the Metropolitan Police’s highest award, the Commissioner’s High Commendation, for his role in overpowering the swordsman. Although none of his victims died, some suffered life-changing injuries while for others the mental trauma proved hard to get over.

Jack Straw, who was Home Secretary at the time, spoke about the attack in the House of Commons, telling fellow MPs: “It is hard to think of anything more terrible than to have the serenity of a church service destroyed in this way.

“I would like to express our deepest sympathy for those who were injured, their families and friends, and for the congregation, who witnessed this awful event. I would also like to express my admiration for the courage of those who intervened to save the largely elderly parishioners from even worse injury.”