One of the most recognisable and prolific British character actresses of the 20th century passed away 31 years ago today, on November 29th, 1987. 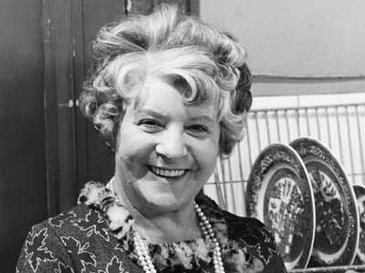 Some actors might have complained of typecasting, but the always modest Handl simply accepted this was what she did best, and the truth was, no-one could do it better. Another thing that most of her characters had in common was that they were loveable, which endeared her to the hearts of the cinema-going public.

Born in the affluent London suburb of Maida Vale, her father, Frederick, was a Viennese banker and her mother a German aristocrat. Her relatively privileged background meant she was able to travel widely in her youth and, unlike most of the characters she portrayed, she was well educated and cosmopolitan. She took to acting relatively late in life, at the age of 36, studying at a school run by the sister of Dame Sybil Thorndike, where she was quickly recognised as ‘a natural’.

In the 1930s the British film industry was booming and she made her first appearance playing a chambermaid in the 1937 comedy “Missing, Believed Maried”. More ‘bit parts’ followed in a constant stream of low-budget films and although her role was sometimes too small to be credited, she was a regular earner, unlike many jobbing actors.

Some of the films she appeared in were big hits, such as 1945’s “Brief Encounter”, in which she played a cellist and organist. Many others were less memorable, but Irene steadily built a reputation as a capable and versatile player, especially in comedies, and she was gradually offered bigger roles. She also took stage work, appearing in the West End in several productions, including roles in Noel Coward’s celebrated “Blithe Spirit” and Oscar Wilde’s classic “The Importance of Being Earnest”.

Unlike the all-too-brief careers of screen starlets which faded with their looks, Irene’s career blossomed as she matured and became more ‘characterful’. A little plump, just under 5ft tall and always cheerful, with a winning smile and a mischievous twinkle in her eye, she was soon in great demand. A breakthrough role came in 1957 when she played Mrs Gammon, the formidable cook, in successful comedy “Small Hotel”.

Two years later she was cast as the long-suffering wife of Peter sellers’ character, union leader Fred Kite, in “I’m All Right Jack”. Sellers, already a major star, struggled to stop Irene stealing the scenes in which they appeared together! Another big star she worked closely with, both on radio and TV, was Tony Hancock, also playing his landlady in 1961 film “The Rebel”.

Her distinctive voice made her a prolific radio performer, partnering Arthur Askey in “Hello Playmates” and appearing frequently in “Hancock’s Half Hour”. Perhaps her best-loved television part was playing the title role of Ada Cresswell opposite Wilfred Pickles in “For the Love of Ada”, which began in 1970 and inspired a spin-off movie in ’72. Film work continued throughout her long career, including two of the early “Carry Ons” and the “St Trinian’s” series, inspired by the cartoons of Ronald Searle.

In 1969 she had a role in the Michael Caine blockbuster “The Italian Job” and the following year became the definitive Mrs Hudson, playing the housekeeper at 221b Baker Street in “The Private Life of Sherlock Holmes”. She even had parts in several of the X-rated British sex comedies of the 1970s, but always kept her clothes on!

In the 1980s she was introduced to a new generation of TV viewers when she played the delightfully dippy Gran in the ITV children’s comedy “Metal Mickey”. She enjoyed cameo roles in several other successful TV series and a few roles near the end of her career brought the opportunity to display the true depth of her acting talent, such as the 1986 BBC film “Hotel du Lac”.

Her final appearance was in the BBC sitcom “In Sickness and in Health” in 1987, shortly before her death at the age of 85 from breast cancer. What is less well-known about Irene Handl is that in the 1960s she penned two novels, “The Sioux” and “The God Tip Pfitzer”, both of which were bestsellers acclaimed for their originality and literary style. She was also a passionate fan of Elvis Presley and a leading member of his UK fan club in the 1970s.