In one of the worst railway disasters of recent times, 35 people lost their lives and hundreds were injured when three trains collided 30 years ago today.

The accident happened during the commuter rush hour on Monday December 12th, 1988, at Clapham Junction, in London – ­Europe’s busiest railway junction. Two of the trains were packed with passengers when they collided due to a signalling failure. More passengers were killed or injured when a third, empty train collided with the wreckage. 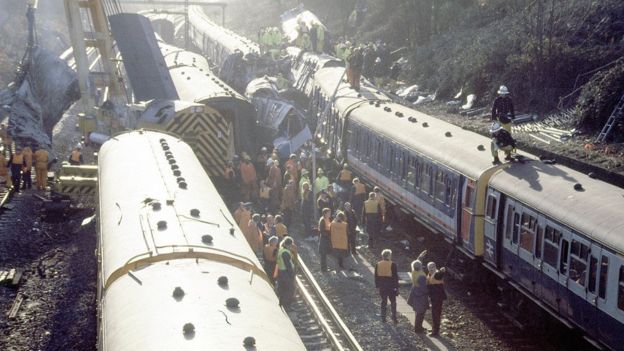 At 7-18am the driver of the crowded Basingstoke to Waterloo train saw the signal ahead of him change from green to red, indicating danger. Unable to stop in time for that signal, he stopped at the next one and telephoned the signal box, but was told there was nothing wrong with the signal and he should remain where he was.

Shortly after 8-10am the following train, travelling from Bournemouth to London, collided at about 40mph with the stationary Basingstoke train. A third train, carrying no passengers, was passing in the other direction on the adjacent track and collided with wreckage pushed into its path by the first impact. The driver of a fourth train saw the accident ahead and managed to come to a stop in time, halting behind a signal which should have been showing red but which was on yellow, meaning ‘proceed with caution’.

The driver of the first (Basingstoke) train had been standing by the telephone awaiting instructions when his train was pushed forward several feet by the first collision. He picked up the receiver and told the signalman of the collision and to alert all the emergency services. The accident had tripped the high-voltage feed to the line’s traction current, which at least meant the fourth train was only coasting when its driver saw the accident ahead.

Teachers and pupils from a school next to the railway were first on the scene of the disaster and able to help the ‘walking wounded’ away from the wreckage. They were later commended for their actions by the Prime Minister, Margaret Thatcher.

Emergency crews arriving found a scene of devastation, involving around 1,300 passengers. The lucky ones escaped unscathed or with minor cuts and bruises, but others suffered far worse injuries, many of them life-changing. Doctors arriving from nearby hospitals had to perform several surgical procedures at the scene to save passengers’ lives or free them from the mangled wreckage.

The rescue operation was difficult because the railway line was in a cutting with a metal fence at the top of a wooded slope and a wall at the bottom of it. The last casualty was taken from the wreckage shortly after 1pm. More than 480 people were treated for injuries, but for 35 there was nothing that could be done. Most of those who died were travelling at the rear of the first (Basingstoke) train. It bore the brunt of the impact when the Bournemouth train crashed into it from behind and was then sideswiped again by the empty train travelling on the adjacent track.

An investigation into the disaster pinpointed its cause to a signal failure caused by a wiring fault. New wiring had been installed, but the old wiring had been left in place and not adequately secured or insulated. The re-wiring had been done a few weeks previously, but the fault had only developed the previous day when equipment had been moved and the loose and uninsulated wire had created a false feed to a relay.

The official inquiry was highly critical of the health and safety culture within British Rail at that time. The technician who had done the rewiring job had had just one day off in the 13 weeks leading up to it. Furthermore, his work had not been supervised or inspected by an independent person (as was required) and the inquiry identified evidence of inadequate training, assessment, supervision, testing and monitoring.

The inquiry made a series of recommendations to improve safety and ensure a similar scenario could not happen again. British Rail was also fined £250,000 for breaching health and safety regulations, but many campaigners, including families of the victims, were angry that there was no prosecution for manslaughter. Almost a decade later the accident was cited as one of the reasons for changes to the law which ultimately resulted in the Corporate Manslaughter and Corporate Homicide Act 2007.