Today we’re going way back in history, more than a thousand years, to a time when the notion of a unified kingdom of England under a single monarch was still being fought for.

Fans of the BBC Two series “The Last Kingdom”, or of author Bernard Cornwell’s ‘Saxon Stories’ novels, on which the TV show is based, might feel familiar with this time period. It was an age when diverse and feuding Anglo-Saxon tribes battled with each other and with invading Danes (Vikings) based in the north for control of various tracts of land. 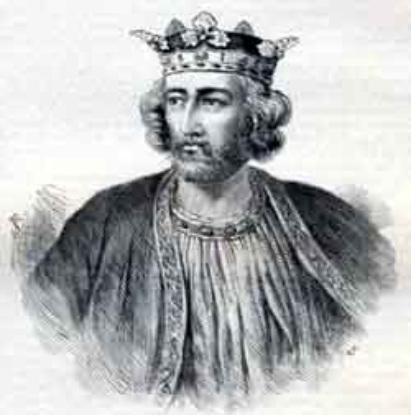 One man, Alfred the Great, had a bigger vision of a unified England, and fought to achieve it. Born in 849AD, he reigned as King of Wessex from 871 and King of the Anglo-Saxons from 886 to his death in 899. Although his reign achieved a great deal, it was not decisive and the fight to unify England passed to his son, Edward the Elder (pictured), who succeeded his father as king in 899.

The Danes apparently accepted Æthelwold as their king, but in truth they took him as a puppet king, a figurehead to legitimise their claims to the prized southern regions of Mercia, East Anglia and Wessex, and their attacks on those regions. In late 901, Æthelwold sailed with a fleet of Northumbrian Danes to Essex and managed to persuade Danes who had settled in East Anglia to join his cause. Together they began to attack Mercia and North Wessex.

Seeing the clear threat to his fragile kingdom, Edward the Elder retaliated by ravaging East Anglia and pushing the Danes back toward the sea, forcing them to defend the land they had settled. Having made his point forcefully and taught the Danes a hard lesson, Edward then decided to retire, but for some of his men, it wasn’t enough.

The Anglo-Saxon men of Kent felt particularly threatened by the Danes and wanted to push Edward’s retaliation further, perhaps even wiping out the East Anglian Danes and pushing their Northumbrian allies back into the sea. They disobeyed Edward’s order to retire and 1,116 years ago today, on December 13th, 902, they met the Danes at the ‘Battle of the Holme’.

The exact location of the battle is lost in time, although it was probably the village of Holme, near Peterborough in what is now Cambridgeshire. The course of the battle is also sketchy, but from what records remain it appears the Danes secured a narrow victory as (according to the ‘Anglo-Saxon Chronicle) they “kept the place of slaughter” – in other words, they were not driven off the battlefield.

More precise records were kept on who died in the battle and although they won the day, the Danes suffered heavy losses. Several of their key noblemen, including Eohric, the self-proclaimed Danish king of East Anglia, were killed in battle. But crucially they also lost their figurehead, Æthelwold, and with his death they also lost any legitimate claim to Edward the Elder’s throne.

The most reliable chronicler of the battle seems at pains in his account to explain why Edward and the rest of his English forces were not present at the battle to crush the Danes. With hindsight, that’s not surprising, as the sacrifice of the disobedient Kentish Anglo-Saxons seems to have secured Edward’s throne and strengthened his hold on it. His reign continued until his death in 924 and although it was his son, Æthelstan, who formally united the ‘Kingdom of England’ in 927, it was Edward who was first hailed ‘King of the English’.