FORTY years ago today Britain was in turmoil, plagued by widespread industrial unrest and strikes over government-imposed caps on pay rises, but Labour Prime Minister Jim Callaghan refused to acknowledge the chaos gripping his country.

On January 10th, 1979, he flew home from an international summit on the sunny Caribbean island of Guadeloupe, which many MPs criticised him for attending when there were so many pressing matters to deal with at home. Landing at Heathrow Airport, he was met by a throng of reporters, with one asking him: “What is your general approach, in view of the mounting chaos in the country at the moment?” 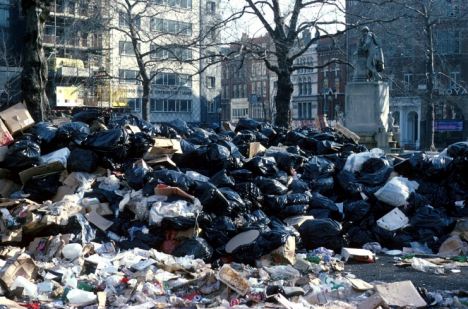 Appearing to brush aside the question, he replied: “Well, that’s a judgment that you are making. I promise if you look at it from the outside, I don’t think other people in the world would share the view that there is mounting chaos.”

On the surface at least, he remained confident that his increasingly unpopular government could sort out the mess and restore order to strike-torn Britain in what would become known as the “Winter of Discontent”. But the next day’s edition of The Sun, Britain’s best-selling tabloid newspaper at the time, ran with the mocking front page headline “Crisis? What crisis?” and a sub-heading of “Rail, lorry, jobs chaos – and Jim blames Press”.

It meant that in real terms public sector workers faced a pay cut as their wages struggled to keep pace with the rising cost of living. Callaghan was convinced that ‘pay restraint’ would slow and eventually halt inflation, helping ease Britain’s long-term economic difficulties.

There was some evidence to support his view; the Labour Government had been pursuing the policy for four years, with some success, but after such a long period of tightening their belts, Britain’s workers were fed up and demanding change through their still-powerful trade unions, traditionally the strongest source of support for Labour. It wasn’t confined to the public sector either; the government appealed to private sector employers to match its pay restraint and many had been happy to comply, but their workers were also getting fed up.

Over the winter of 1978/79, a series of strikes to secure higher pay rocked several industries. When Mr Callaghan landed at Heathrow the country was becoming crippled by a lorry drivers’ strike which affected everything from fuel to food supplies, while sporadic rail strikes were also grinding the country to a halt.

The Prime Minister’s apparent indifference did him no favours. The Sun’s article condemned him for being out of touch with the reality facing many British workers and other newspapers took a similar line. Meanwhile, supermarket shelves began to empty amid panic buying over fears of food shortages if the transport strikes continued.

Of course, his political opponents seized their opportunity, the Conservatives calling for an immediate general election. Leading Tory Michael Heseltine said the country was close to a state of emergency and told reporters: “It’s quite obvious Mr Callaghan is out of touch with the deteriorating situation in Britain... to come back and suggest it all looks parochial is frankly patronising.”

Things didn’t improve over the following weeks. January 22nd, 1979, was the biggest individual day of strike action since the General Strike of 1926, and many workers stayed out indefinitely afterwards. As private sector employers gave in and awarded significant pay rises to their workers, resentment in the public sector only deepened.

When gravediggers went on strike in Liverpool the council was forced to hire a refrigerated warehouse to store corpses awaiting burial, with 25 more added every day. Ambulance drivers and sewerage works came out on strike while rubbish piled up in the streets of many cities and towns because the binmen were on strike, prompting fears of a plague of rats.

For Mr Callaghan, it spelt the end. On March 28th his government lost a vote of confidence by a single vote and he was obliged to call a general election. It was held on May 3rd and won by the Conservatives with a 43-seat majority, making their leader Margaret Thatcher Britain’s first woman Prime Minister.