REMEMBER Saturday afternoons in the sixties and seventies, when ‘grapple fans’ across the country would crowd around TV sets to watch the latest bouts of televised professional wrestling?

ITV broadcast televised wrestling for 33 years, from 1955 to 1988, with viewing figures hitting their peak when it became one of the highlights of Dickie Davies’ weekly “World of Sport” between 1965 and ’85. Fans could hardly wait for 4pm when commentator Kent Walton introduced the latest bouts transmitted from civic halls and provincial theatres around the UK. 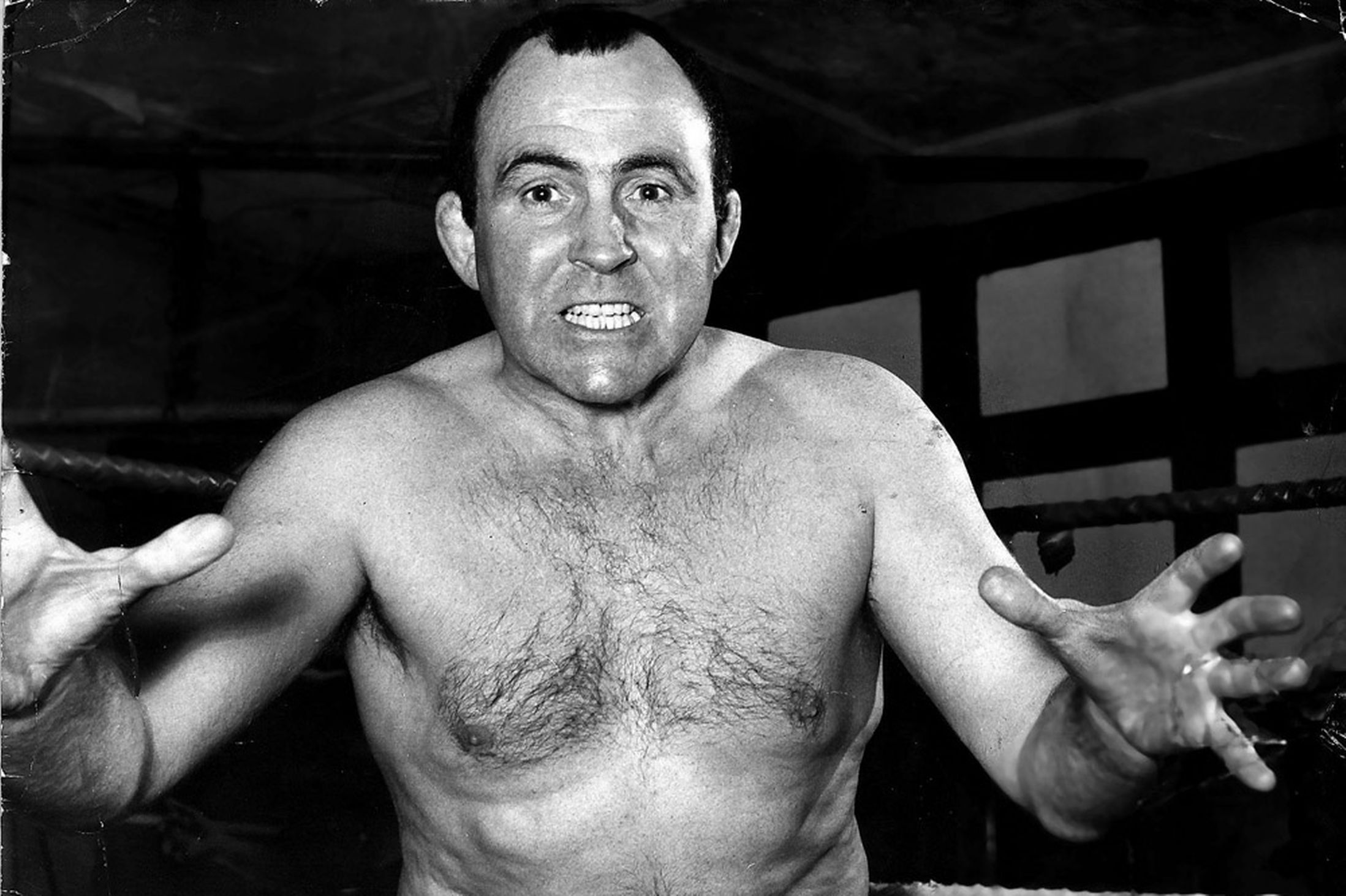 They made household names of British wrestlers like Big Daddy, Jackie Pallo, Giant Haystacks, Tony St Clair, Catweazle, Mark ‘Rollerball’ Rocco and the mysterious Kendo Nagasaki. There were even future film and TV stars among them in Brian Glover and the formidable Pat Roach, but chief among them, making more TV appearances than any other, was the legendary Mick McManus.

Born 99 years ago today, on January 11th, 1920, McManus (pictured above) was TV wrestling’s favourite ‘heel’ (villain) in a sport that wonderfully combined athleticism and skill with entertaining pantomime antics. He suffered more ringside blows from the handbags and umbrellas of incensed old ladies than any other after being theatrically thrown over the ropes by the (usually) victorious ‘blue-eye’ (good guy), and took it all in good grace.

As well as being a consummate entertainer, McManus (whose birth name was William George Matthews) was a highly trained and skilled wrestler who instructed RAF personnel in the martial art during the Second World War. He trained with an amateur wrestling club while growing up in South London and made his professional debut in 1947, having previously worked in a drawing office and for a firm of printers.

Despite his relatively small stature –­ he stood 5ft 6ins and weighed 12-and-a-half stones – McManus was a formidable opponent. Aside from the predetermined pantomime antics of Saturday afternoon televised wrestling, there was a serious side to the sport and McManus was at its heart. In 1949 he won the British Welterweight Championship, eventually losing it to Jack Dempsey in 1957 but regaining it the following year.

His 1963 bout against fellow professional Jackie Pallo was watched on TV by more than 20 million viewers. In 1967, after 20 years in the ring, he won the British Middleweight Championship and the following year added the European Middleweight title to his accomplishments. Losing it in a rematch with Vic Faulkner, he regained the European title in 1971 and held it for almost seven years, defeating a string of upcoming young contenders.

No-one could deny McManus’ genuine wrestling credentials in the professional sport, but it was the hugely popular and entertainment-focussed televised Saturday afternoon bouts which made him a household name. Perennially cast as a heel, McManus was known for his trademark black trunks and cropped jet black hair.

He also coined a memorable catchphrase; when opponents went for his head he would shout theatrically: “Not the ears! Not the ears!” and even feign running away! To a backdrop of ‘booing’, he was routinely introduced by Kent Walton as “The Man You Love to Hate”, and he played the role with relish. His fame led to primetime appearances on TV gameshows and a memorable role as the ‘park bench bully’ in the 1980 Morecambe and Wise Christmas Show.

Retiring from the ring in 1982 after a 35-year professional career and by then in his early sixties, McManus worked as a celebrity for hire and as an advisor to London Weekend Television on its wrestling coverage, which by then was starting to wane in popularity. While still wrestling and afterwards, he also ran the London office of a professional wrestling promotion firm, a role which included ‘choreographing’ bouts and determining their results in advance.

Away from the wrestling ring, he was softly-spoken and well-educated, becoming a connoisseur of and authority on antique porcelain, which he collected with his wife of many years, Barbara. The couple also owned and ran The Royal Hotel public house in Guildford, Surrey, where they were popular hosts.

Friends said that McManus never recovered from the loss of his beloved Barbara in January 2013. By then residing in a West London nursing home for retired actors (together with his good friend Sir Richard Attenborough), he seemed to lose the will to live, eventually refusing to eat and slipping into a coma. He died on May 22nd, 2013, four months after his wife, at the age of 93.