HUNDREDS more people suffering from severe to profound deafness will be eligible each year for a life-changing ‘cochlear implant’ on the NHS after official guidance on who can receive them was updated.

The new advice comes from NICE – the National Institute for Health and Care Excellence – which has updated its definition of what constitutes “severe to profound deafness”. It is that definition which determines who is eligible for a cochlear implant (an advanced type of hearing aid) on the NHS.

The NICE definition now recognises “severe to profound deafness” as only hearing sounds louder than 80db HL (decibels in hearing level) at two or more frequencies without hearing aids. The previous definition set the cut-off for eligibility at 90db HL, so this lowering of the threshold means that hundreds more people each year will now be considered eligible for an NHS cochlear implant.

While it does not restore hearing, the implant creates a sense of hearing by picking up sounds which are turned into electrical signals and sent to the brain. The technology is particularly effective in children with severe to profound deafness, as their brains rapidly learn to interpret the signals as sound. Older people might need longer for their brains to ‘re-learn’ and adapt.

Unlike conventional hearing aids, which just make sounds louder, a cochlear implant does the work of damaged parts of the inner ear (the cochlea) to provide sound signals to the brain. 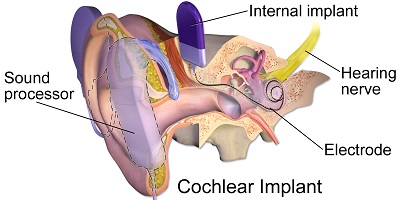 How does a cochlear implant work?

Cochlear implants help people who have significant hearing loss in both ears and receive little or no benefit from conventional hearing aids. The implant can be done for a single ear or both ears depending on the patient’s needs. Listening with both ears can improve your ability to identify the direction of sound and separate the sounds you want to hear from those you don’t.

Patients who do not qualify for a cochlear implant on the NHS can have the procedure carried out privately, but it is not cheap, typically costing around £25,000 per ear. The cost to the NHS is thought to be even higher, put at around £38,000 to £45,000 by a leading cochlear implant surgeon in a 2014 newspaper article.

Commenting on NICE’s decision to update its definition, Meindert Boysen, director of the Centre for Technology Evaluation, said: “The appraisal committee listened to concerns regarding the eligibility criteria for cochlear implants being out of date. Upon review it was concluded this needed to be updated. The new eligibility criteria for cochlear implants will ensure that they continue to be available on the NHS to those individuals who will benefit from them the most.”

Vicki Kirwin, children’s audiologist at the National Deaf Children’s Society, reacted positively to the news. She said: “With the right support, deaf children can achieve anything in life. NICE is going a long way towards making that promise a reality for all those children who can benefit from this technology.”