TODAY we celebrate a quiet and (by his own admission) even ‘antisocial’ man, whose lifetime’s work has introduced England’s Lake District to millions of people worldwide.

Alfred Wainwright’s unique seven-volume “Pictorial Guide to the Lakeland Fells” has been in print continuously since the books were first published between 1955 and 1966. Not bad considering he only began writing them for his own amusement! 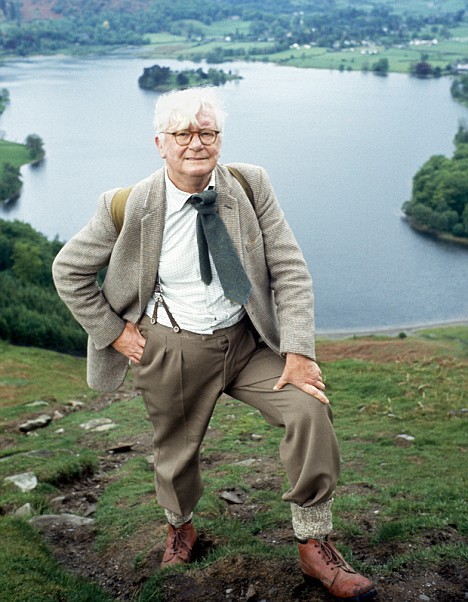 Wainwright was born on January 17th, 1907, in the bustling mill town of Blackburn, Lancashire, growing up in a family which was kept poor by his father’s alcoholism. At school he was a gifted scholar, top in almost every class, but left at 13 to find work.

Unlike most of his classmates, who went into the clattering textile mills, Wainwright found a position as ‘office boy’ in the Engineer’s Department at Blackburn Borough Council. At least there his employers encouraged him to better himself, studying at night school to gain qualifications in accountancy which in turn brought him promotion at the council.

Even as a boy, Wainwright walked a lot, often escaping the smoky cobbled streets of Blackburn to spend the whole day exploring the surrounding countryside, covering up to 20 miles. A favourite destination was Pendle Hill, the highest point within walking distance and which offered long-distance views. He also made pencil sketches of the places he visited and drew his own detailed maps, showing the routes he took.

In 1930, aged 23, he saved up for a week’s walking holiday in the Lake District with his cousin, Eric Beardsall. It awakened a lifelong passion for the lakes and mountains of Cumbria and set the course for the rest of his life. After that, whenever he could he would catch a bus to the Lakes to walk in the hills, exploring new areas and revisiting favourites.

In 1941 he moved closer to his beloved fells, taking a job at the Borough Treasurer’s office in Kendal, at the southern edge of the Lake District, even though it meant a pay cut. He took with him his wife of 10 years, Ruth, and their young son, Peter, living and working in Kendal for the rest of his life. At every opportunity, Wainwright would lace up his walking boots, fill a rucksack with a day’s provisions and head out for the fells. He relished the solitude of wandering alone amidst the magnificent scenery in all weathers and many of his books pay tribute to his wife for “not standing in my way”.

He began work on his “Pictorial Guide to the Lakeland Fells” in November 1952, as a project to fill the long winter evenings. He meticulously planned the content of the seven volumes – each covering a different area of the Lake District – and worked from notes, sketches and photographs taken during his walks. It was a personal project rather than for publication, working in his own neat handwritten script instead of using a typewriter, and illustrating his work with detailed pen and ink drawings and easy-to-follow hand-drawn maps.

He completed about one page per evening, but hardly anyone outside his immediate family knew of the work. It wasn’t until he showed it to his friend Henry Marshall, Kendal and Westmorland’s chief librarian, that the idea of publication was seriously considered. Wainwright had no interest in searching for a publisher and couldn’t contemplate his work being ‘messed about with’, but Marshall and other friends struck a deal with The Westmorland Gazette to print the books from Wainwright’s original handwritten pages.

In those days most local newspapers like the Gazette also operated a commercial printing business to keep their printers and presses occupied when not producing the weekly newspaper. The Gazette also publicised the books, which soon became popular, not just with walkers but with anyone who appreciated Wainwright’s distinctive writing style, his beautiful drawings and obvious love for his subject matter.

After completing his Lakeland guides, Wainwright went on to other projects, producing a “Pennine Way Companion” in 1968, using his now-established style to create a detailed handbook to Britain’s first long-distance footpath. In 1972 he devised his own long-distance walk, a 190-mile “Coast to Coast Walk” between St Bees on England’s west coast to Robin Hood’s Bay, on the east coast. Passing through the Lake District, the Yorkshire Dales and the North Yorkshire Moors, it was named the world’s second best walk in a 2004 survey of experts.

In later life, Wainwright also featured in three BBC TV series recreating some of his favourite walks. His naturally taciturn persona meant he was accompanied by a co-presenter, often his friend Eric Robson, who would prompt conversation along the way through asking questions. Wainwright authored or co-authored around 40 books as well as his Lakeland guides, most of them walking guides or sketchbooks, but also some autobiographical work.

The normally solitary man finally found a walking companion in his second wife, Betty, who he married in 1970. Interviewed on “Desert Island Discs”, he admitted to being naturally antisocial, even avoiding speaking to other lone walkers when they met on isolated mountain tops, other than a polite “Howdo”.

Wainwright died of a heart attack in 1991, but his legend lives on. A bridge is named after him in his native Blackburn, where the local brewery also brews a popular “Wainwright” beer. His books still sell in their thousands and, in perhaps the most fitting tribute of all, keen fell walkers attempt to bag “The Wainwrights” – visiting all 214 Lakeland peaks covered by his famous pictorial guides.