AROUND three-quarters of people in the UK are now cremated after death rather than buried, but it wasn’t always so, with the change initiated only 135 years ago by a quite remarkable Welshman.

Born in Glamorganshire in 1800, Dr William Price led an eventful and colourful life, regarded as both a radical and a noted eccentric, especially in his later years. 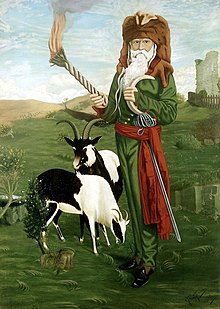 As a younger man his active involvement in Chartism – the working class movement seeking democratic rights for all men – saw him flee to Paris disguised as a woman following a failed uprising in 1839. While living in exile he became increasingly obsessed with Welsh cultural history and, in particular, the druids.

On returning to Wales he set himself up as a druid, attracting a number of followers. Growing a long beard, he dressed in emerald green clothes and wore a ceremonial hat made from a full fox pelt, often carrying a sword and a long staff engraved with druidic letters and topped with a crescent moon.

Contrary to many Victorian values, Dr Price believed in ‘free love’ and campaigned for the abolition of marriage, which he saw as the enslavement of women. He was an early advocate of vegetarianism, believing that diet combined with exercise and plenty of fresh air promoted good health. To that end, he would roam the remote hills and valleys naked, reciting poetry, and often accompanied by his best friend, a bull named Morgan.

Following another spell in France, this time to escape his debtors, he returned to Wales in 1866, settling in the town of Llantrisant. There he set up a medical practise which, perhaps surprisingly, thrived. Surprising only because he refused to treat anyone who smoked and often refused payment from those he did treat if he knew they couldn’t afford it. When he did accept money, he scrupulously washed every coin, believing they transmitted germs. Despite all this, he was known as an outstanding doctor.

He also took up with a local farmer’s daughter, 60 years his junior, who became one of his followers. Despite his earlier pronouncements on marriage, he took her as his ‘wife’ in a druidic ceremony which he performed himself on his 81st birthday. Their first child was born in August 1883, a son who Price controversially named ‘Iesu Grist’, the Welsh for ‘Jesus Christ’.

Tragically the child died on January 10th, 1884, at the age of just five months. Dr Price firmly believed it was wrong to bury a body in the ground, writing: “It is not right that a carcass should be allowed to rot and decompose in this way. It results in a wastage of good land, pollution of the earth, water and air, and is a constant danger to living things.”

Instead he resolved to cremate his infant son’s body, even though the notion of cremation was very much taboo in Britain at that time. Undeterred, he climbed to the top of a hill overlooking Llantrisant where he built a funeral pyre and attempted to cremate his son.

Locals who noticed the fire rushed to find its cause and, on discovering the scene, set upon Dr Price and managed to drag his son’s casket away before it was engulfed in flames. Dr Price had to be rescued from the angry mob by police, who promptly arrested him for what they believed was the illegal disposal of a corpse.

There was initial suspicion over the infant’s death, but a post mortem carried out by another doctor confirmed he died of natural causes. When his case came to trial 135 years ago, Dr Price successfully argued that while the law did not say cremation was legal, neither did it say it was illegal. When the judge agreed he was set free and returned to Llantrisant to find a crowd of cheering supporters.

The legal precedent set by his highly-publicised case, together with pressure from the recently-founded Cremation Society of Great Britain, ultimately led to the Cremation Act of 1902, legalising cremation in Great Britain. Soon, crematoriums were being built in cities and town across the country, with more and more people choosing the new and often cheaper alternative to burial.

As for Dr Price, he was finally able to cremate his son in a druidic ceremony largely of his own devising. Later that year his wife gave birth to another son, also named Iesu Grist, followed by a daughter in 1886. Dr Price died peacefully at his home in Llantrisant in 1893, at the age of 92.

In accordance with his will, his body was cremated on the same hilltop as his son, on a pyre made of two tons of Welsh coal, and watched by 20,000 spectators. A statue now stands in the centre of Llantrisant in tribute to the extraordinary and singular Welsh druid whose heartfelt actions helped legalise cremation in the UK.

Did you know that Acorn Stairlifts has a five-star ‘Excellent’ rating on leading independent online review site Trustpilot?

There’s nothing wrong with a ‘chippy tea’ now and then, maybe as a treat, but if you want to eat fish ‘n’ chips more regularly, why not try this healthier version, which you can easily make at home.

You spend more time in your home than anywhere else, especially if you’re isolating or shielding due to Covid-19, so it’s important to make it a safe environment for you and your loved ones.