They came from the so-called “Gang of Four” – a quartet of leading figures in the Labour Party who called a press conference to voice discontent with where Labour was heading and their intention to set up a “Council for Social Democracy”. 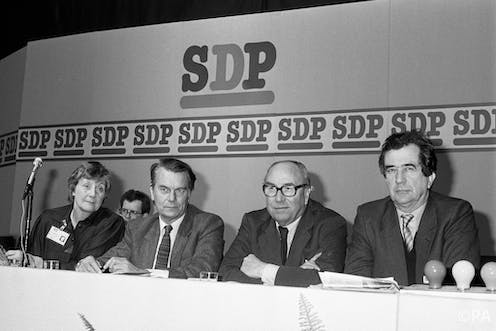 The Gang of Four – all former Labour cabinet ministers – were Shirley Williams, David Owen, Roy Jenkins and Bill Rodgers (pictured right). They occupied the centre-ground of the Labour Party, but were alarmed at the growing influence of the hard left and, in particular, the ‘Militant tendency’ – a hardline Trotskyist group aiming to infiltrate the Labour Party.

The press conference was held at Dr Owen’s home in the Limehouse district of East London. In what became known as the “Limehouse Declaration”, the four outlined the policies for their Council for Social Democracy, which they said harked back to the roots of the Independent Labour Party.

While the Gang of Four said they would prefer to remain within a realigned Labour Party, their press conference signalled their intention to set up a breakaway party unless things changed. The clear implication was that a significant number of other Labour MPs, who shared similar views, might join them.

The Limehouse Declaration warned that many lifelong Labour supporters would face difficult choices if their party moved further to the left. Just a few days earlier the left-wing scored a victory at a special Labour Party conference which gave the trade union block vote the biggest say in future elections for the party’s leader.

Many in the party had misgivings about the amount of power and influence this handed to the unions, their concerns embodied by the Gang of Four. Speaking on the BBC’s “Panorama” programme, Mrs Williams said she had fought from within to save the party for several years, but now felt she was fighting a losing battle.

“We have to say now we think the character of the party has changed so far it will take something very exceptional, something really out of the ordinary to make us be convinced there’s a chance of winning back the party,” she said. “We would like to do so. We would like to think there could be a miracle of that sort, but I have to say that we are very pessimistic at the present time.”

The four expressed a desire to stay within a Labour Party restored to its social and democratic principles, but acknowledged their actions could see them being thrown out. If that happened, they would look to establish their own party.

Two months later, and after a show of support from other Labour MPs and party members, they did just that, founding the Social Democratic Party (SDP) on March 26th, 1981. If Labour had called their bluff, it had cause to regret it, with 28 sitting Labour MPs (and a one Conservative) defecting to join the new SDP. Neither Shirley Williams nor Roy Jenkins were MPs at the time, but both were elected to Parliament after standing as SDP candidates in by-elections in Merseyside and Glasgow respectively. Jenkins was elected as the new party’s first leader.

By the autumn of 1981 the SDP had formed a political alliance with the Liberal Party – the traditional centre party in British politics – agreeing to work and vote together on most issues. It continued to gain momentum and increased membership, but was disappointed to make no ground in the 1987 general election while Labour, now under Neil Kinnock, made significant gains.

After that disappointment the SDP formally merged with the Liberals to create the Social and Liberal Democrats (SLD), hoping it would combine their public support. David Owen, one of the original Gang of Four, fiercely opposed the merger and created a new reincarnation of the SDP. It performed poorly in a 1990 by-election on Merseyside, trailing in behind the Monster Raving Loony Party, and was subsequently disbanded.

And so Britain returned to a political system dominated by three main parties, but the SDP certainly made an impact. Labour was rocked by the unexpected number of defections from its ranks and began to pull back from the hard left, initially under Kinnock and his successor John Smith, then more strongly after Tony Blair was elected Labour leader in 1994. He took his revitalised party to a landslide victory in the 1997 general election after rebranding it ‘New Labour’ – ironically one of the names the Gang of Four initially considered for their breakaway party before opting for the SDP.