POSSIBLY the most influential pop group ever, The Beatles gave their final public performance 50 years ago today, playing an impromptu concert on the roof of their recording studio in central London.

Formed in 1960, The Beatles enjoyed a phenomenal 10-year career, sparking “Beatlemania” both in the UK and America, but it was approaching its end by early 1969. Not because the fans had had enough, but because the band members had and were beginning to go their separate ways. 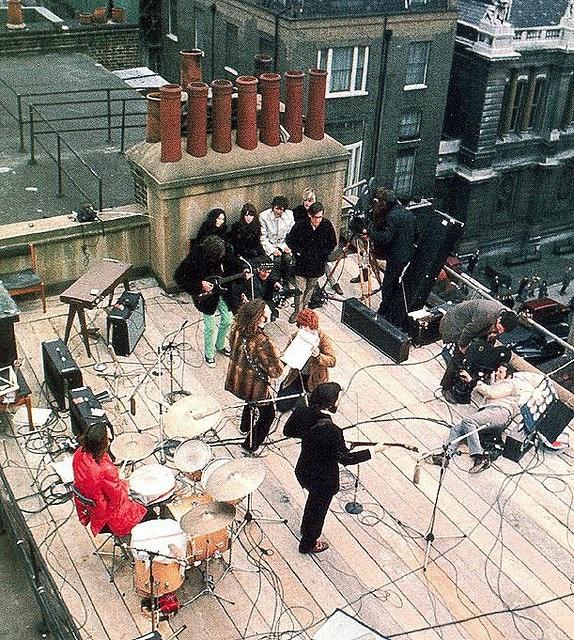 After selling out stadiums and concert halls on both sides of the Atlantic, it was ironic that their farewell performance should be an informal and unstructured 42-minute set on top of a five-storey building in Savile Row, the headquarters of their own production company, Apple Corps.

The rooftop concert was unannounced, but the band had been planning it for several days. Just whose idea it was remains uncertain. According to drummer Ringo Starr, it was the band who came up with the idea. He remembered: “There was a plan to play live somewhere. We were wondering where we could go – ‘Oh, the Palladium or the Sahara’ – but we would have had to take all the stuff, so we decided, ‘Let’s get up on the roof’.”

The band’s recording engineer, Glyn John, remembered it differently in his autobiography “Sound Man”, claiming the idea to use the rooftop was his. Whatever the truth, it certainly wasn’t a case of just going up on the roof and striking up the band. A lot of equipment had to be lugged up there and set up, not least because the “impromptu” gig was to be recorded and filmed by director Michael Lindsay-Hogg and his camera crew. They shot the whole thing from several angles, as well as capturing footage of spectators in the street below and on nearby rooftops.

Wires ran from rooftop microphones down through all five storeys to the basement recording studio, where the ‘gig’ was taped on two eight-track recorders. Joining the “Fab Four” was American session keyboard player Billy Preston, brought in at the suggestion of guitarist George Harrison. He apparently thought the presence of a talented ‘outsider’ musician would encourage the Beatles to be tight and focused.

It seemed to work, as the concert, although brief, saw The Beatles back on top form. When they started playing, people in the street below and surrounding buildings – many on their lunch breaks – were initially confused, wondering where the music was coming from. But The Beatles had a distinctive sound and when people realised what was going on, news quickly spread and a crowd began to congregate.

It wasn’t a concert in the traditional sense, but more like a public recording session, with the band playing nine takes of five Beatles songs during the 42-minute set. The songs were “Get Back”, “Don’t Let Me Down”, “I’ve Got a Feeling”, One After 909” and “Dig a Pony”. The group had been rehearsing and recording in the building – while also being filmed for a ‘fly-on-the-wall’ documentary – throughout January and the live concert was to be the climax of the film.

Most of the growing crowd of spectators responded positively, surprised to be getting a free show from the world’s biggest band, but the police received some complaints about noise and problems also arose with traffic congestion in Savile Row as the crowd of onlookers grew.

Police officers went to the Apple building where staff initially tried to stall them and keep them out, but soon relented when threatened with arrest. Realising the concert was about to come to an abrupt end, Paul McCartney improvised new lyrics to the final take of “Get Back”, singing: “You’ve been playing on the roofs again, and you know your Momma doesn’t like it, she’s gonna have you arrested!”

As the song ended, John Lennon, always the quipster of the group, told the crowd below: “I’d like to say thank you on behalf of the group and ourselves and I hope we’ve passed the audition.”

Although fans didn’t know it then, it was the last time the band would play together in public. They released their 11th studio album, “Abbey Road”, in September 1969, but by then the group had already unofficially disbanded, with an official announcement made in April 1970. It preceded the release of the documentary film “Let It Be”, shot in the Apple Corps recording studio in January 1969 and climaxing with footage of the now-famous rooftop concert, recorded 50 years ago today.