SUFFRAGETTES were celebrating a step forward in their campaign to win women the right to vote 101 years ago today, but there was still some way to go.

The Representation of the People Act 1918 received Royal Assent (making it law) on February 6th, 1918, bringing in sweeping changes to who was and wasn’t allowed to vote in parliamentary elections. In particular, it gave the vote to 8.5 million women, establishing the principle that women – if they met certain conditions – should be allowed to vote in their own right. 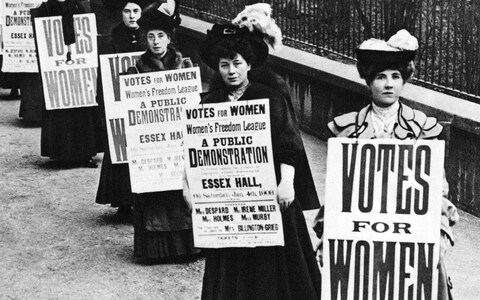 Prior to the 1918 Act, it was assumed that only men should carry the weighty responsibility of voting, since the man was head of the household and any political views his wife might have should be subservient to his. A few very wealthy women had the right to vote in Parliamentary elections, on the grounds of their property ownership, but not many exercised the right.

The situation was slightly different for local elections, where single women who didn’t have a husband to cast their vote, but who were also ratepayers, had been allowed to vote since 1869. That right was extended to some married women in 1894. Yet the electoral system remained massively weighted in favour of men, and even then, men of wealth and property.

But times were changing, and so were social attitudes. The Suffragists (members of the National Union of Women’s Suffrage Societies) and the more militant Suffragettes, who engaged in direct action and civil disobedience which sometimes led to members being jailed, had been active since around the turn of the century. Their campaigning gathered pace in the early 1900s and into the 1910s, although some incidents – such as suffragette Emily Davidson throwing herself under the king’s horse in the 1913 Epsom Derby – were seen to set the movement back.

The outbreak of the First World War, in 1914, caused a suspension in active campaigning for women’s suffrage, but the difficult war years strengthened their case. Throughout those years, women took on many roles vacated by men who had gone to fight, and performed them well. If they could perform the same roles in society as men, then shouldn’t they also enjoy the same voting rights, campaigners rightly asked?

The war was also fought to preserve democracy, yet in Britain democracy was a privilege reserved for the male property-owning classes. It was a situation which could no longer be sustained, and the politicians knew it. The 1918 Act aimed to address electoral inequalities and, while far from perfect, it went further in doing so than any previous reform. It tripled the size of Britain’s electorate (people allowed to vote) from the 7.7 million allowed to vote in the 1912 election to 21.4 million by the end of 1918.

It was done in two main ways; first, all men over 21 could now vote in the constituency where they lived, regardless of whether they owned property or not. This extended the male electorate by 5.2 million, to 12.9 million. Second, women over 30 were given the vote, but only if they met a range of conditions. For example, they had to be the registered property occupier of land or premises with a rateable value greater than £5, or be married to a man who met that condition. Women graduates over 30 who lived in a university constituency also gained the right to vote.

It was far from the electoral equality which the suffragists and suffragettes campaigned for, but it was some sort of progress and meant that for the first time, 8.5 million women could vote in British Parliamentary elections. Women now accounted for almost 40% of the electorate, a figure which some entrenched politicians saw as a dangerously high! The voting age of 30 was chosen to prevent the overall percentage of women voters rising higher. If it had been 21, the same as for men, there would have been significantly more women voters than men, due to the large numbers of men lost in The Great War.

Shortly after the 1918 Act was passed, one Government Minister admitted that: “The reason why the age limit of 30 was introduced was in order to avoid extending the franchise to a very large number of women, for fear they might be in a majority in the electorate of this country. It was for that reason only, and it had nothing to do with their qualifications at all. No one would seriously suggest that a woman of 25 is less capable of giving a vote than a woman of 35.”

There was more progress in November 1918 when another reform enabled women to be elected as MPs. The first election for which all these electoral reforms were in place was the general election of December 1918, which resulted in a landslide victory for the coalition government headed by Liberal David Lloyd George.

It would be another decade before women gained full electoral equality in the Representation of the People (Equal Franchise) Act of 1928. It gave the vote to all women at age 21, regardless of any property qualification – the same criteria that applied to men ­– and in doing so added another five million women voters to the UK electorate.