WITHOUT a drop of blood being shed, a “Glorious Revolution” reached its climax 330 years ago today when a new King and Queen of England, Scotland and Ireland were proclaimed.

William and Mary would rule as joint sovereigns, but under a new ‘Bill of Rights’ which greatly reduced their royal authority and gave more power to Parliament to control the country’s finances, army and much more. It marked the start of a new Britain as a ‘constitutional monarchy’ – a system of government in which a country has a figurehead monarch as its notional ‘head of state’, but the real power lies with an elected parliament. 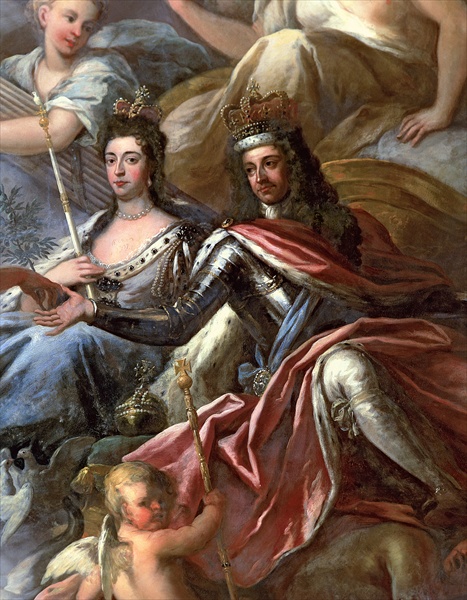 Crucially, this new Britain would also be a Protestant state, which is why William and Mary had been ‘invited to invade’ and claim its throne. At that time, the country was divided between Catholics and Protestants, each vying for control. King James II, a Roman Catholic, had ruled since 1685, but was unpopular. Britain’s mostly Protestant political elite suspected him of being pro-French and having designs on becoming an all-powerful ‘absolute monarch’ with the military backing of Catholic France.

Things worsened when James and his devoutly Catholic second wife produced a son and heir to the throne, also called James. Up to that point, next in line for the throne had been James’ eldest surviving daughter from his previous marriage, Mary, who was a Protestant and married to the Protestant Dutch prince, William of Orange. British Protestants pinned their hopes on Mary succeeding her father, but the birth of a new male Catholic heir threatened that.

Unlike James, William of Orange was an enemy of Catholic France, which made him a friend to Britain’s influential Protestants. Several of them wrote to him urging him to invade Britain and claim the throne for his wife. At first William resisted, but when James refused to join the League of Ausberg (an anti-French alliance), relations between the two worsened and William began to assemble an invading army. The time was ripe, since France was preoccupied with military campaigns in Germany and Italy and unlikely to intercede on James’ behalf.

William was still reluctant to act, fearing the English would oppose any foreign invasion, but in June 1688 a group of seven leading English political figures – including three Earls, a Viscount and the Bishop of London – wrote to him. Their letter was effectively a formal invitation to invade Britain, and an assurance that opposition to that invasion would be minimal.

William was persuaded and on November 5th 1688 his invasion fleet landed on the Devon coast at Brixham. Around 250 ships and 60 fishing boats carried a force of 35,0000 men, including 11,000 professional foot soldiers and 4,000 cavalrymen. If there was to be trouble, they were ready for it, but it didn’t come. Instead, as news of the invasion spread, support for King James melted away.

Protestant officers defected from his army, most taking their loyal soldiers with them and some going to join the invaders. Across the country, Protestant noblemen publicly declared their support for William, with the implication that if there was to be war, they and their people would fight on the invader’s side.

King James soon realised the game was up. He sent emissaries to negotiate with William, but in early December he tried to flee London in secret, throwing the Great Seal (the official symbol of his sovereignty) into the Thames on his way. He was heading for France, hoping to enlist Catholic support, but was discovered and brought back to London. A few days later, William allowed him to ‘escape’ to France, not wanting to make James a martyr to the Catholic cause.

The deal to dethrone James and replace him with his daughter Mary wasn’t quite sealed yet though. The Protestants saw Mary as the natural heir and their true Queen and were therefore happy to accept her husband William as her Consort, at least while Mary lived. But William, a royal in his own right, was not prepared to play second fiddle to his wife. He insisted the county accept them both as King and Queen, joint rulers, or the deal was off and he would return to Holland. What’s more, his loyal wife Mary backed him up.

It meant some hasty rewriting of laws in Parliament allowing William and Mary to rule together, in return for their accepting the Bill of Rights which handed the true power to Parliament. The deal was struck and on February 13th, 1689. William and Mary were proclaimed as King and Queen of England, Scotland and Ireland (Wales was officially ruled by its own Prince, usually a son and heir of the monarch, but in practical terms it came under the same rule as the rest of Britain).

On April 11th William and Mary were crowned together at Westminster Abbey, becoming joint rulers and sealing what became known as the “Glorious Revolution”. They reigned side-by-side for the next six years until Mary died of smallpox at the end of 1694. William then ruled alone for the next eight years until he died of pneumonia after falling from his horse and breaking his collarbone. The couple produced no children, so it was Mary’s younger sister, Anne, who became the next Queen of England, Scotland and Ireland.