EARLY worrying signs of an epidemic that would grip British agriculture for eight long months and cost billions of pounds were made public 18 years ago today, on February 19th, 2001.

Alarm bells rang when an abattoir at Brentwood in Essex was shut down and a five-mile exclusion zone placed around it amid a suspected case of the dreaded and highly contagious foot-and-mouth disease. 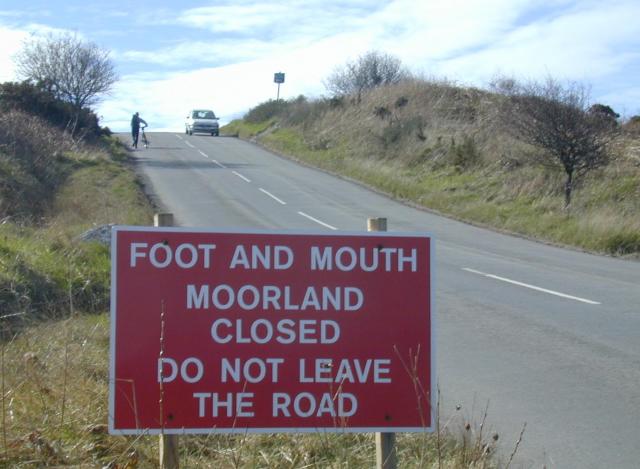 A spokesperson for the Ministry of Agriculture, Fisheries and Food (MAFF) said the discovery was made during a routine inspection of the premises by the State Veterinary Service. At that stage 27 pigs, brought from two farms in Buckinghamshire and on the Isle of Wight, were showing symptoms of the disease. The exclusion zone prevented the movement of pigs, sheep, goats and cattle within a five-mile radius of the abattoir while the investigation was carried out, with similar zones placed around the two farms.

It was hoped that even if foot-and-mouth was confirmed, it could be contained and prevented from spreading. Farmers were urged to check their livestock for symptoms, which included lameness, loss of appetite and blisters in the mouth causing animals to salivate. It had been 20 years since the last detected cases in the UK, which were successfully confined to a small area, but the closure of many local abattoirs meant livestock was now being transported greater distances.

For livestock farmers, the threat of another outbreak was a constant worry. Peter Stewart, for the National Farmers Union, said: “Foot-and-mouth is one of the most devastating diseases in pigs and cattle. It’s the speed of spread and the fact the entire herd has got to be completely wiped out. It’s a very, very worrying disease.”

For two days the nation held its breath, but on February 21st the outbreak was confirmed, with all 300 animals at the abbatoir culled in a bid to contain it. The European Commission immediately banned all British milk, meat and livestock exports until official confirmation that the disease had been contained – but it was already too late. Within days, more cases were confirmed, initially in the same area, then worryingly, further afield.

For British agriculture, still recovering from an outbreak of swine fever the previous year, it couldn’t have come at a worse time. Shadow Agriculture Minister Tim Yeo was quick to criticise the Government for not doing enough to prevent the outbreak, especially in the wake of the swine fever epidemic: “The Government should have acted sooner to prevent the risk of this disease entering Britain through sub-standard meat imports,” he said.

Over the following days, weeks and months, more cases of foot-and-mouth were confirmed. The only way to stop its spread was through mandatory culling of livestock, not just on affected farms but also on neighbouring ones, with the carcases burned and all buildings thoroughly disinfected. Eventually more than 2,000 cases were identified across Britain, with around 10 million sheep and cattle slaughtered and the British Army called in to assist with disposing of carcases.

Cumbria was the worst hit, with 843 confirmed cases in the county. By the time the disease was finally halted in October 2001, it had cost the UK economy around £8 billion, not just in agriculture but in tourism, food exports and all aspects of the rural economy. Much of the British countryside was effectively shut down, with many rural roads closed near affected farms and people encouraged to stay away.

For many farmers the personal cost was much higher. Some saw pedigree herds built up over decades wiped out at a single stroke. Although compensation was available to farmers affected by foot-and-mouth, many small farms never recovered and families which had worked the land for generations left the industry for good.

By the end of March, at the height of the outbreak, up to 50 new cases were announced each day, with up to 90,000 animals per week being slaughtered. The final case was reported on September 30th, 2001, but restrictions on animal movement remained in place for several more months. The UK was finally declared foot-and-mouth free in January 2002, almost a year after the first outbreak.

The source of the epidemic was traced to a farm in Northumberland, where one of the pigs at the Essex abattoir had originally come from. The owner of the Northumberland farm was convicted of feeding his pigs ‘untreated swill’ which contained traces of infected meat imported illegally to Britain. He had also failed to inform the authorities of a notifiable disease. Tighter controls were introduced in a bid to stop any future outbreak of the disease.