TODAY we celebrate one of Britain’s greatest ever songsmiths and lyricists, the late Jake Thackray.

Born on this day in 1938, Thackray rose to national prominence in the late 1960s and throughout the seventies, performing topical, comedic and sometimes darkly satirical songs on various TV programmes. A graduate in English, his witty and wonderfully crafted lyrics told rich and enthralling stories, yet despite making more than a thousand TV and radio performances he was a reluctant performer and ultimately abandoned his career as an entertainer for a life in obscurity. 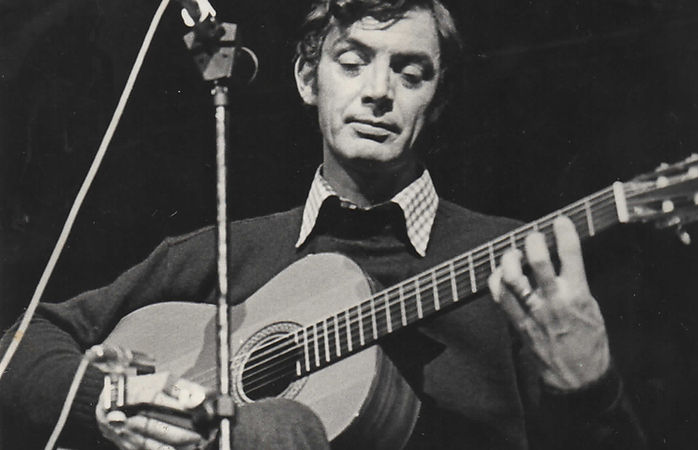 The son of a policeman, John Philip ‘Jake’ Thackray was born in Kirkstall, Leeds, and raised a Roman Catholic, attending Jesuit schools in Leeds then as a boarder in north Wales. His strict religious upbringing would influence much of his later work and he briefly considered entering the priesthood, but chose instead to study English at Durham University. After graduation he spent four years teaching English in France where he became fluent in the language and discovered the Gallic ‘chansonnier’ tradition of singer-songwriters, influenced particularly by Georges Brassens.

Returning to his native Leeds in 1964, he began teaching in Bramley and found one way to win over unruly pupils was through making up songs and accompanying himself on a nylon-strung classical guitar, which he taught himself to play. Friends encouraged him to perform at local folk clubs and as he built up a following he was offered spots on local radio. These brought him to the attention or producer Norman Newell, who persuaded Thackray to professionally record about 30 of his songs.

Eleven of them were released as his 1967 debut album, “The Last Will and Testament of Jake Thackray”, whose title track urged his friends to mark his passing with a big, riotous party, and then forget him. Other standout tracks included “Lah-Di-Dah” and “Country Bus”, with the record company, EMI, adding orchestral backing to all but two of the tracks. Its executives were nervous about how the public would respond to Thackray’s lugubrious baritone voice and flat Yorkshire vowels with only a simple acoustic accompaniment.

They needn’t have worried –Thackray’s unpretentious originality caught the public imagination and he was soon appearing on TV, penning a weekly topical song for the consumer magazine programme “Braden’s Week” and after that its successor, “That’s Life!”. It made him a household name and more albums followed, ditching the superfluous orchestral backing. Fans wanted his voice, his florid lyrics and distinctive fingerpicking guitar style, somewhere between classical and jazz.

In 1968 he married, recording his second album, “Jake’s Progress” the same year at Abbey Road Studios, with the Beatles recording in the studio next door. There were live concerts too, but Thackray hated playing the big concert halls, much preferring the informal setting and small audiences of pubs and folk clubs. He often suffered from nerves and a lack of self-confidence and it wasn’t unknown for him to cancel a gig at the last minute, often with some elaborate excuse.

A 1971 live album captured a memorable performance at London’s Queen Elizabeth Hall and the following year he released his third studio album, “Bantam Cock”. Its title track, telling the story of a lusty and cunning bantam, has become a folk standard performed the world over, while the album also features another of Thackray’s best-known song, “Sister Josephine”, telling of a notorious burglar hiding out in a convent disguised as a nun!

A highlight of his career came in 1973 when he invited his idol Georges Brassens to perform in Cardiff and served as his ‘support act’. Over the next few years there was a ‘best of’ compilation album and a final studio album “On Again! On Again!”, whose title track told the story of a woman who “will never use three or four words when a couple of thousand will easily do” It brought misguided accusations of misogyny levelled by knee-jerk critics who didn’t know his other songs, many of which celebrate the strengths and attributes of women over those of men.

In 1981 there was a BBC2 series, “Jake Thackray and Songs”, featuring Thackray playing some of his best-known folk songs and welcoming guest musicians. His fans loved it, but wider musical tastes were changing and his style was falling out of fashion. As his TV appearances and live shows became fewer, some close friends felt he happily embraced the relief from the pressure of performing.

For four years in the 1990s he wrote a humorous column in his hometown newspaper, “The Yorkshire Post”, which he could do from his bolthole in South Wales. His health was failing, worsened by years of heavy drinking, and in his final years his only regular musical activity was ringing the Angelus on the bell at his local church, his religion becoming stronger in later years. Separated from his wife and with three sons, Jake Thackray died of heart failure on Christmas Eve 2002 at the age of 64.

It was a sorry end and came too soon, but he left behind a remarkable catalogue of work which has inspired countless other performers and continues to delight fans old and new. In 2006 EMI responded to a resurgence in interest by releasing a 4-CD box set, “Jake in a Box” – a comprehensive collection of his recordings. His 1981 TV series has also been released on DVD by his fan club, who regularly organise ‘Jakefest’ get-togethers to remember and celebrate their hero. To see and hear Jake Thackray performing “Sister Josephine”, click here.