PARENTS, grandparents and anyone who cares for children are being encouraged to be aware of – and look out for – the signs and symptoms of scarlet fever.

Scarlet fever is a seasonal bacterial illness which is common at this time of year, mainly affects children and is easily treated with antibiotics. The latest monitoring report by Public Health England (PHE) shows that 6,316 cases of scarlet fever have been reported since mid-September 2018, compared to an average of 6,680 for the same period over the past five years. There were 409 cases reported for the most recent week (February 18th to 24th, 2019). 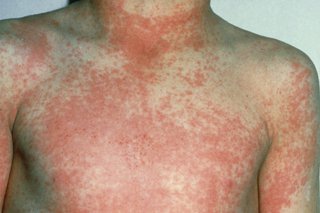 Scarlet fever is usually a mild illness, but it is highly infectious so PHE is advising parents to be on the lookout for symptoms. They typically include a sore throat, headache and fever, with a characteristic fine, pinkish or red body rash with a sandpapery feel. If signs of scarlet fever are suspected, it is important to contact your local GP or phone the NHS helpline on 111.

Dr Theresa Lamagni, Senior Epidemiologist at Public Health England, explained: “It’s not uncommon to see a rise in cases of scarlet fever at this time of year. Scarlet fever is contagious, but not usually serious and can be treated with antibiotics to reduce the risk of complications and spread to others.

“We are monitoring the situation closely and remind parents to be aware of the symptoms of scarlet fever and to contact their GP for assessment if they think their child might have it. PHE is investigating possible reasons for why there has been a rise in scarlet fever cases over the last few years, by studying the strains of bacteria causing disease and the spread of infection in different settings and patient groups.”

Professor Helen Stokes-Lampard, chairwoman of the Royal College of GPs, added: “Patients with scarlet fever usually present with flu-like symptoms including a sore throat, fever and headache, as well as a characteristic rosy rash – usually on the patient’s chest initially.

“Scarlet fever is a bacterial infection that generally affects children under 10 more than teenagers or adults. It is very contagious but can be quickly and effectively treated with a full course of antibiotics. GPs would also recommend patients to rest, drink plenty of fluids, and use antihistamine tablets or calamine lotion for relief of symptoms related to the rash.

“We have seen more cases of scarlet fever in the last few years than we’ve been used to – we’re unsure why this is, but if a patient thinks that they, or their child, might have symptoms, then they should seek medical advice.”