Today we at Acorn Stairlifts pay our respects to the now dwindling number of Second World War veterans and, in particular, to those who took part in the D-Day landings of June 6th, 1944.

Seventy-five years ago today marked a major turning point in the war against Nazi Germany, with Britain and her Allies gaining a precious foothold on five key Normandy beaches and pushing quickly inland over the following days and weeks to secure it. 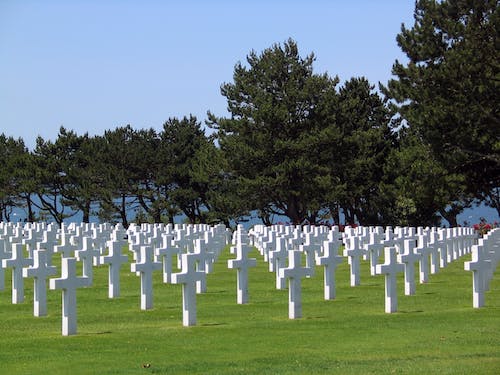 Eleven hard-fought months later the war in Europe would be over, with Germany crushed in the pincer grip of the Allies advancing from the west and the Soviet Union from the east. Pivotal to it all was the success of the Allied invasion of France, officially codenamed “Operation Neptune” but now more commonly remembered as “D-Day”.

It was the largest military naval, air and land operation ever carried out, involving troops from Britain, the USA, Canada and France in the first push, followed up by others from more than a dozen allied nations. In the run-up to D-Day more than two million troops were stationed in Britain ready to cross the English Channel.

More than a year in the planning, it included a massive and largely successful misinformation campaign to convince Hitler that the Allies would invade in and around Calais. Even after the Normandy landings, Hitler kept strong reserves stationed on the Calais beachheads, convinced they would be the site of a second and larger invasion.

D-Day was originally planned for Monday June 5th, 1944, taking advantage of a full moon and Spring tide, but bad weather forced a 24-hour postponement. Instead the effort began in the early hours of Tuesday June 6th, when more than 23,000 airborne troops from British and US divisions were parachuted or landed in gliders behind enemy lines along the Normandy coast.

Their job was to knock out German defences targeted on the landing beaches and clear routes inland, ready for the main invasion. But it was perilous work and many died, were wounded or captured. From 6-30am on June 6th, the first five assault divisions were delivered to their assigned beaches, codenamed ‘Utah’, ‘Omaha’, ‘Gold’, ‘Juno’ and ‘Sword’.

Around 7,000 ships and landing craft unloaded 156,000 troops and 10,000 vehicles onto the beaches, all under the cover of a massive naval bombardment from battleships lying off the French coast, designed to keep the defenders pinned down in their shelters. Some of the beaches proved to be lightly defended and the element of surprise also meant troops faced little opposition. Not so at ‘Omaha’, where the invading American troops met stiff resistance from battle-hardened defenders and suffered heavy losses to gain their precious foothold.

When news of the landings first reached German military commanders, they thought it might be a diversion and didn’t dare wake the increasingly irascible and unpredictable Hitler to tell him the news. Precious hours were lost, but when he did wake he was said to be excited because he believed his troops would easily push the Allies back into the sea. He was wrong.

On D-Day alone, the Allies suffered up to 4,400 troops killed, wounded or missing, but as the beachheads were secured and extended, more reserves arrived to relieve and reinforce the first wave. The following weeks and months saw fierce fighting and more heavy losses on both sides. French civilians also paid a high price as the Allies continued to bomb strategic locations in enemy-occupied territory, making the most of their air superiority to support their ground troops’ advance.

It was hard going and every mile cost more lives, but by late August the Allies liberated Paris and on April 30th, 1945, a besieged and hopeless Hitler committed suicide in his Berlin bunker. Just over a week later on May 8th, Germany signed terms for total and unconditional surrender.

Today, 75 years on, thousands of Worlds War Two veterans will commemorate the events of June 6th, 1944, many of them travelling to the Normandy beaches where so many of their comrades made the ultimate sacrifice, and to the war cemeteries where they lie. We thank them all, those who died and those who lived, for doing what had to be done, regardless of the terrible cost.