Just a week after D-Day and the Allied invasion of Normandy, the Germans launched a new ‘vengeance weapon’ against Britain in a last ditch bid to terrorise her people.

The new ‘V1 flying bombs’ were pilotless jet-propelled planes, effectively the first cruise missiles, each carrying a ton of high explosives. The distinctive sound of their pulse-jet engines quickly led to them being dubbed “buzz bombs” or “doodlebugs” – a generic name for various types of flying insects. 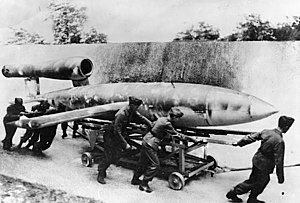 The flying bombs were guided by gyroscopes and filled with just enough fuel to reach their intended target. When the buzzing of their engines stopped, people ran for cover as the flying bombs fell to earth, designed to detonate on impact.

Hitler had planned to launch his V1 rockets earlier in the war, but their planning and development had been mired in technical difficulties. In the end they were rushed into action in direct response to the D-Day landings, but were still not perfected and proved far less devastating than intended.

Their first use in action, on June 13th, 1944, saw 10 V1 rockets launched against England. Five malfunctioned and crashed near the launch site, one was lost in the English Channel and of the four that made it to England, only one hit its target, killing eight people in London.

That first V1 raid was doubly ineffective as the intention had been to combine it with a conventional bombing raid on London, to heighten the terror effect. But the Royal Air Force had destroyed the Nazi bombers on the ground in a raid on German airfields the previous day. Even so, rumours of the new and technically advanced German weapon spread quickly. This was the first self-guided long-range missile and a potentially lethal development in aerial warfare.

Britain had to respond quickly to the new threat and develop effective countermeasures. These included barrage balloons to physically block the flying bombs’ flightpath, and targeting by anti-aircraft guns on the ground. The V1s had been intended to fly at 9,000ft, out of the range of ground guns, but regular mechanical failures at high altitude meant they were adapted to fly much lower. This made them more vulnerable to heavy anti-aircraft guns stationed on the south coast, but it was a difficult job to hit the fast moving missiles.

The most effective measure was found to be fast aircraft, which were scrambled as soon as incoming V1s were spotted by Royal Observer Corps posts or detected by radar. Their job was to shoot down the flying bombs, exploding them in mid-air, but it was difficult and dangerous work. Initially the only aircraft capable of matching the 340mph average speed of the flying bombs at low altitude was the Hawker Tempest, and only about 30 were in service.

More were commissioned and other fighters were specially modified to make them faster, with smaller fuel tanks and their heavy armour plate removed, as it wasn’t necessary against an ‘enemy’ incapable of shooting back. American Mustangs and Thunderbolts were used, together with RAF Spitfires and Mosquitoes. Their pilots soon learned to increase their attack speed by diving on the flying bombs from above, using their heavy cannons to explode the target at a safe distance.

Some daring pilots also developed a new method, discovering they could send the flying bombs into an out-of-control dive by ‘tipping’ them. This involved bringing their wingtip to within just six inches of the underside of the flying bomb’s wing. The airflow over the intercepting fighter’s wingtip would force the V1’s wing up, overriding the gyro inside the missile and sending it spiralling into a dive.

‘Tipping’ doodlebugs soon became an exciting challenge for interceptor pilots, and one they quickly mastered. Put together, the British countermeasures meant that by August 1944 about 80% of V1s were being destroyed before they could reach their targets. Combined with this was increased bombing raids against the V1 launch sites, targeting both the underground storage facilities and the ramps used to launch the missiles.

As Allied forces advanced further into France, more launch sites were overrun and by October 1944, the V1 flying bomb threat against Britain had been neutralised. In total, just over 9,500 flying bombs had been launched against Britain, but a combination of their unreliability and effective countermeasures meant less than a quarter reached their targets.

While the ‘doodlebugs’ were certainly feared and claimed many innocent lives, they came too late in the war and proved far less effective than Hitler had planned and hoped for.