Ticks are small blood-sucking members of the spider family. There are about 20 species in the UK, but only a few will feed on humans, the most common being ‘Ixodes ricinus’, commonly known as the ‘sheep tick’ or ‘deer tick’. It will feed from practically all mammals, including humans and pets, especially dogs, so it’s important to check you or your pets aren’t carrying an unwanted passenger. 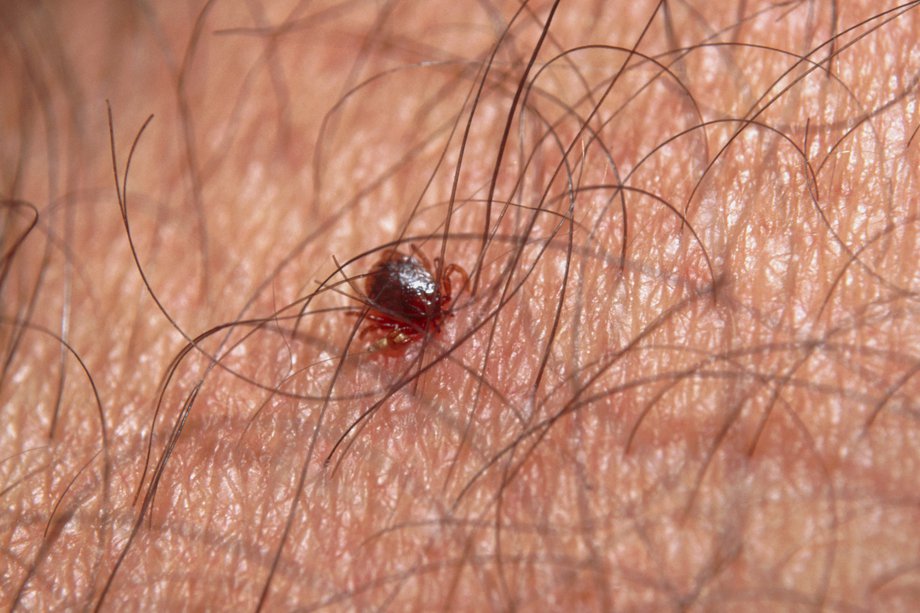 Ticks are becoming more common across large parts of the UK, especially in or near woodlands, heathland and moorland and some grassland sites. Ticks can be active all year, but numbers increase from late march, peaking in late spring and summer.

Ticks do not jump or fly, but instead wait on the protruding tips of foliage such as long grasses or ferns, waiting for an animal to brush past so they can latch onto it. They are so small that you’re unlikely to notice if you pick one up, and there is a natural anaesthetic in their saliva so you probably won’t feel it if one bites you.

They do this by burrowing their mouth parts into your skin until they can start sucking blood. Once they have fed they become engorged and larger, making them easier to see. Once a tick bites into the skin and if it goes unnoticed, it will feed on blood for a few days before dropping off. It all sounds deeply unpleasant, but most tick bites are harmless.

A few, however, are infected with bacteria that causes infections including Lyme disease, which is why it’s important to know if you’ve been bitten by a tick and then to look out for symptoms. Lyme disease can be serious if left untreated, so if you know you’ve had a tick bite, keep checking the site of the bite for signs of a red rash, often described as looking like a bull’s eye on a dartboard. It will usually appear within four weeks of a bite by an infected tick, but it can be up to three months.

Not everyone gets the rash and other things to look out for in the days and weeks following a tick bite are flu-like symptoms (feeling hot and shivery or with a high temperature), headaches, unusual muscle and joint pain or tiredness and a loss of energy. If you’ve been bitten by a tick, or visited an area where they are present within the past month, and then you notice any of these symptoms, you should see your GP.

Tell your GP about the tick bite (or possibility of one) and they will consider all your symptoms and probably give you a blood test. If they suspect Lyme disease, the usual treatment is a three-week course of antibiotics, which must be completed. Some people with severe symptoms might be referred to a hospital specialist for stronger antibiotics or injections. It can take several months to fully recover from Lyme disease, but the symptoms should start to improve after treatment starts.

The best thing is to avoid being bitten by ticks in the first place. You can reduce the risk by sticking to paths in areas where ticks thrive, avoiding dense vegetation or grassland and trying not to brush against foliage. Keep your skin covered with clothing and tuck your trousers into your socks. Light-coloured clothes make ticks easier to spot. Use a good insect repellent on your skin and clothes; those containing ‘DEET’ are best.

If you notice a tick on your skin, you should remove it quickly and safely – the sooner it is removed the less likely you are to get an infection. Don’t just nip or brush it off, as the mouth parts can detach and stay stuck in your skin, which is more likely to cause an infection. Instead use fine-tipped tweezers to grasp the tick as close to the skin as possible. You can also buy a special tick removal tool from pharmacies, vets or pet shops, but tweezers work just as well.

Once you have a grip on the tick, slowly pull upwards and outwards, taking care not to squeeze or crush it. Once you’ve removed it, dispose of it and clean the bite with antiseptic or soap and water. You don’t need to do anything else except look out for a rash or other symptoms which could mean the tick was carrying Lyme disease. Only if you notice these symptoms should you consult your GP.

Remember to check children or pets, especially dogs, for ticks if you’ve been in an area where they are likely to be. They can be hard to find on dogs, but it is worth checking thoroughly and if you find a tick, remove it in the way described above. To watch a short and informative film about tick awareness from Public Health England, click here.