Something serious was threatening to scupper the traditional British Christmas back in 1950.

Thankfully, the crisis passed with massive relief all round at the news on December 18th that there would, after all, be a Christmas edition of the Radio Times. 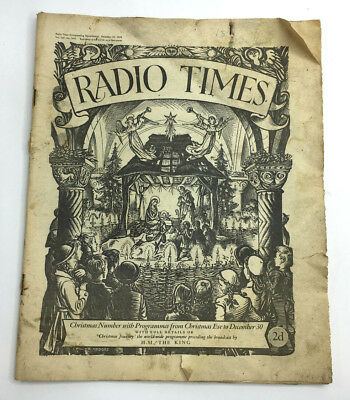 For many people Christmas just isn’t Christmas without the festive Radio Times, especially since it began publishing its bumper double issue in 1969. Even back in 1950, it was an essential part of many people’s Christmas, listing all the entertainment lined up for radio and TV broadcast over the yuletide period.

Not many people had televisions in 1950 and programming was limited, but TV listings had begun appearing in a small section at the back of the magazine. However, almost everyone had a radio and the Radio Times, as it name suggests, was the indisputable ‘bible’ for the avid radio listener. Its average weekly sale was more than eight million copies, making it the most widely read magazine in all Europe.

But readers were facing a Christmas without their favourite magazine when an industrial dispute by printing unions threatened its publication. It had already missed a single issue in September 1950 and three consecutive weeks in October, but never before had a Christmas issue been in doubt. Between its founding in 1923 and the start of 1950, just three issues had been missed; one in 1926, due to the General Strike, and two in February 1947, due to the fuel shortages.

The printing dispute of 1950 disrupted production of many magazines and other publications for several weeks during the autumn, but none was so much missed as the Radio Times. Mercifully, on December 18th it was announced that, with the dispute finally settled, there was still time, just, for the Christmas edition to be printed and distributed.

The Christmas edition of the Radio Times is traditionally its best-selling one of the year. It was even rumoured that some of the trade unionists had been keen to get their dispute resolved because they feared the public would turn against them if they were deprived of their favourite festive magazine. Even on weeks when the Radio Times was printed during the dispute, several editions were in a curtailed 20-page version limited to basic listings, without the usual accompanying articles.

The striking printers and compositors had been demanding a weekly wage of £8, but eventually settled for a minimum of £7 15s, linked to the cost of living. When it appeared in newsagents on December 22nd, the 1950 Christmas Radio Times (pictured above) had an illustration of the nativity scene on its front cover and, inside, a picture of King George VI reading his Christmas Day message.

At that time the Radio Times was owned directly by the BBC, which had started the magazine in 1923 because newspapers refused to print radio listings, fearing that promoting the radio would lead to a decrease in their sales. It remained in BBC ownership until 2011, when a reorganisation saw it transferred to a newly-formed publishing company.

The magazine reached its peak in the late 1980s, with the Christmas 1988 double issue selling more than 11 million copies. Circulation dropped after 1991 when deregulation of the market meant that other magazines were allowed to print full listings for all TV and radio programmes, including BBC channels. With the growth of the internet, listings are now available online and today’s digital TV sets can display electronic programme guides at the push of a button.

Even so, the Radio Times still sells more around 520,000 copies per week, with that figure rising significantly for the Christmas and New Year double issue. Many people who never buy a Radio Times throughout the rest of the year still make a point of buying the Christmas double-issue, simply because it has become part of Christmas.