‘Belt up’ or you could face a fine. That was the new warning to motorists in the UK after it became compulsory for drivers and front seat passengers to wear a seatbelt 37 years ago today.

The new legislation came into force from midnight on January 31st, 1983, with most UK police forces adopting a ‘softly softly’ approach – beginning by cautioning offending motorists at first rather than fining them. However, the new laws would be more strictly enforced for professional drivers, such as bus and lorry drivers, who were expected to comply with the rules as part of their job. 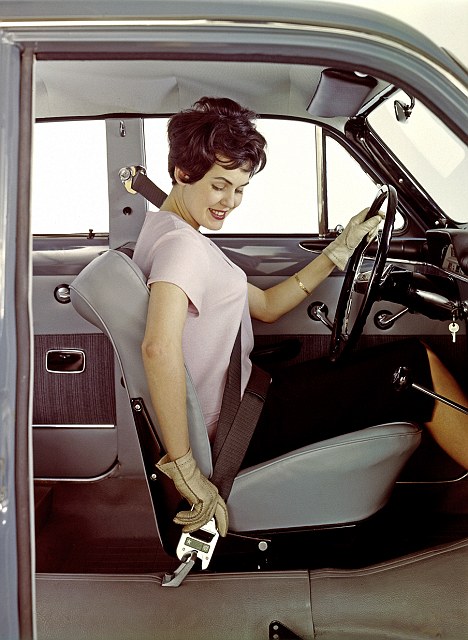 Almost four decades on it is second nature for the vast majority of drivers to automatically ‘buckle up’ as soon as they get in a vehicle, but in 1983 the new law was controversial and resisted by many as an attack on civil liberties! The row over making front seatbelts compulsory had rumbled on for 15 years, with no fewer than 11 previous attempts to make it law.

Despite accusations of the Government acting as a ‘nanny state’ by forcing people to wear seatbelts, the real motivation for the new law was to improve road safety and cut the number of deaths in road accidents. The Department of Transport said 30,000 people a year were killed or seriously injured in road accidents in the UK. It estimated the new law could save a thousand lives per year.

Front seatbelts had been fitted as standard in cars for many years and their lifesaving benefits were promoted in a series of high-profile TV publicity campaigns throughout the 1960s and ’70s. Perhaps the best remembered featured the now deceased and disgraced celebrity Jimmy Saville and the catchy slogan “Clunk click, every trip”. Yet research in 1983 estimated that 60% of drivers still routinely chose not to wear their seatbelt.

The new law to make wearing a seatbelt mandatory was also highly publicised, so that drivers couldn’t claim ignorance of it if pulled over by the police. The Government also advised people to make sure their seatbelts were correctly adjusted and positioned so they would work properly in the event of a crash.

Junior Transport Minister Linda Chalker acknowledged some resistance to the change, telling reporters: “Nobody likes being told to do something when they haven’t seen for themselves the sense of it.”

But she dismissed claims by opponents of the new law that some people could suffer worse injuries from wearing a seatbelt than they would without one. She said the likelihood of that was extremely small compared to the obvious safety benefits of wearing a properly adjusted seatbelt.

A few drivers were exempt from the new law. These included taxi drivers, who successfully argued that their personal safety was at risk from dangerous passengers if they were strapped in. Drivers of electric delivery vehicles, such as milk floats, were also exempt.

Despite the opposition, figures showed that 90% of drivers and front seat passengers began routinely wearing their seatbelts after it became compulsory. It was more difficult to assess the impact on road safety, but experts and emergency services soon began reporting that the earlier estimate of saving a thousand lives per year had been a conservative one.

In fact, many more drivers were being saved by wearing their seatbelts, mainly through avoiding a severe impact to their chest and abdomen from the steering wheel and column, or being thrown through the windscreen. This, of course, was long before the innovation of safety airbags which inflate on impact to cushion the blow. Experts now say you’re twice as likely to die in a road accident if not wearing a seatbelt.

Following the success of the 1983 law, in 1991 it also became compulsory for adults to belt up in the back seat. It had been compulsory since 1987 for car manufacturers to fit rear seatbelts as standard, but only about 10% of passengers chose to wear them. Safety campaigns highlighted not only the benefit to back seat passengers, but the danger to those in the front seats of unrestrained back seat passengers being flung forward in a collision.

More legislation followed governing the way in which children and infants are restrained in cars, so that now they must all be securely strapped into suitable car seats or carriers. Again, the safety benefits of these changes have no doubt saved countless lives over the years, yet some drivers still routinely flout the seatbelt laws relating to both themselves and their passengers.