and mention "BLACKFRIDAY" to get your deal today!

Are you ready for the new ‘plastic’ £20 note arriving later this month? 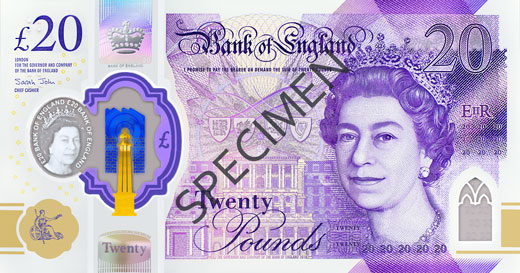 Like its lower denomination stablemates, the new £20 note will be made of a hardwearing and durable polymer plastic designed to last much longer than traditional ‘paper’ banknotes (actually made from a kind of linen). And just as the new polymer £5 and £10 notes are smaller than their predecessors, the new £20 note will also be slightly smaller than the current one. It will measure 139mm by 73mm – a centimetre less in width and 7mm less in height. 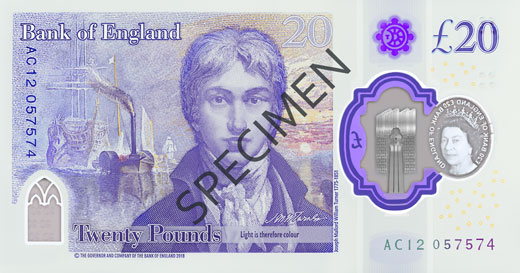 Turner’s signature on the new £20 note is taken from his will, in which he bequeathed his work to the nation. It also features a quote – “Light is therefore colour” – taken from an 1818 lecture by Turner at the Royal Academy of Arts. Turner’s popularity received a boost through a 2014 movie about his life and work, starring Timothy Spall as the great artist.

Security features of the new £20 note designed to foil the counterfeiters include:

Statistics from the Bank of England show the £20 is Britain’s most commonly circulating banknote, with two billion of them in the system. That means it will take quite some time to fully change over from the current £20 note to the new one. Everyone will be able to use the existing paper £20 note (introduced in 2007 and featuring a portrait of economist Adam Smith) alongside the new one until the old note is officially withdrawn from circulation.

The Bank of England will announce the withdrawal date for the old note once the new one is in general circulation. It will give at least six months’ notice of the withdrawal date, allowing people plenty of time to root out their stashes of old £20 notes and get them spent or exchanged.

Even after the withdrawal date, there will be ways to exchange old notes for new ones. For a limited period, people will be able to exchange them in person at their bank or local Post Office, but after that they will need to be sent direct to the Bank of England.

After the new £20 note’s introduction this month, the only remaining paper banknote will be the £50 note, which is Britain’s least used banknote. That is also set to change, with a new polymer £50 note set to enter circulation by the end of 2021. It will feature a portrait of computer pioneer and codebreaker Alan Turing and will measure 146mm by 77mm, slightly smaller than the current paper £20 note.

It’s been a tough year for everyone as the Coronavirus pandemic impacted all our lives, but it’s perhaps hardest of all for those coping with bereavement.

Whether you need a stairlift in a hurry or you’ve reached the decision more gradually, two questions you’ll probably ask are ‘how much is a stairlift?’ and ‘how quickly can I have one?’

As we grow older, keeping our brains active and challenged is just as important as looking after our bodies.

News of emerging vaccines promises light at the end of the coronavirus pandemic tunnel, but many people who’ve already had the disease continue to suffer from long-term effects.

When you’re in the market for a home stairlift, it’s easy to get bogged down by the wide array of different models from competing manufacturers.