Football’s World Cup – the Jules Rimet Trophy – was stolen from an exhibition in London on Sunday March 20th, 1966.

The 14-inch tall golden trophy was on display at Methodist Central Hall in London in the run-up to the World Cup finals, to be hosted by the UK later that year. Valued at £30,000, it was snatched while a church service was being held in another part of the building. 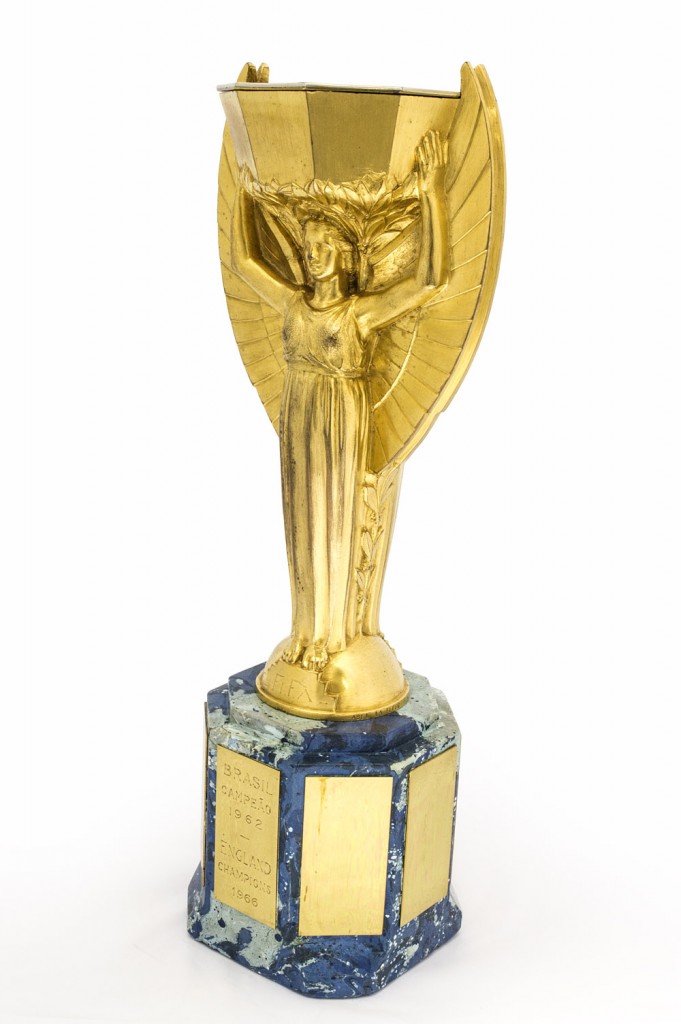 At least two guards were on duty in the hall at the time, but nobody saw anything until someone noticed the iconic trophy was missing. Later questioning produced a description of a “suspicious-looking man” who was seen in the building at the time of the theft. He was described as in his early 30s, of average height, with thin lips, greased black hair and a possible scar on his face.

Police soon began to suspect it was an opportunistic theft rather than a well-planned job, since stamps on display at the same exhibition and worth £3 million were left untouched.

A public appeal was made for anyone with information about the suspect or the whereabouts of the trophy to come forward. It was set to be the centrepiece of the World Cup contest later that year and its disappearance threw tournament organisers FIFA into disarray. The cup’s then holders, Brazil, were also angry at the theft, claiming such a sacrilege would never be committed in Brazil because even its thieves loved football too much!

After a week of anxiety and frenzied police activity, the missing trophy turned up in bizarre circumstances. It was discovered by a curious dog, named Pickles, wrapped in newspaper underneath a suburban garden hedge on Beulah Hill in Upper Norwood, South London.

Curious at what Pickles was sniffing out, his owner David Corbett was astonished to uncover the gleaming Jules Rimet Trophy, which he duly handed in at the local police station. He later received a £5,000 reward – enough to buy a new house in 1966 – while Pickles got a silver medal from the National Canine Defence League and basked in the glow of international publicity.

Detectives speculated that the thief had panicked at the worldwide publicity over the theft and, realising he would never be able to move on such an easily identifiable item, instead dumped it. The trophy was also widely believed to be solid gold, but was in fact gold-plated silver.

Later that year the victorious England side won the Jules Rimet Trophy after beating Germany in the World Cup Final. It had been football’s ultimate prize since the advent of the World Cup in 1930 and named in honour of FIFA President Jules Rimet, who instigated the competition.

After winning the World Cup, the English FA secretly had a replica of the trophy made, without FIFA’s permission, so it could be used in any future exhibitions and public appearances without the risk of the original being stolen again. At the next World Cup, in 1970, Brazil won the trophy for a third time which, according to Jules Rimet’s original stipulations for the competition, allowed them to keep it forever.

A new prize, the FIFA World Cup Trophy, was made to replace it, similar in size and overall design but made from 18 carat gold with a malachite base. It was first presented at the 1974 World Cup Finals to winner West Germany and is still in use today.

Meanwhile, Brazil’s claim that no Brazilian would have the temerity to steal the revered Jules Rimet Trophy came back to haunt it. In 1983 it was pinched from a display at the Brazilian Football Confederation’s HQ in Rio de Janeiro and has never been seen since! It was displayed in a cabinet with bullet-proof glass, but the thieves simply prised the wooden back off the cabinet. Highly embarrassed, the Confederation had to commission a replica working from photos and drawings.

Back in England, the secret and unauthorised FA replica (pictured) had been gathering dust under its creator’s bed since 1970. It finally emerged and was auctioned in 1997, selling for £254, 500 – almost 10 times its auction estimate – to FIFA.

So if it hadn’t been stolen in 1966, later found by Pickles the dog and secretly copied by a nervous FA, FIFA would not today possess an exact copy of the Jules Rimet Trophy, crafted from the original.