National hero Captain Tom will be the guest of honour at today’s official opening new Nightingale hospital for Yorkshire and Humberside.

In a story now known across the country, Second World War veteran Captain Tom Moore set out to raise £1,000 for the NHS by walking 100 laps of his garden before his 100th birthday on April 30th. When the story featured on the national news it caught the public imagination and the fundraising total has now passed an incredible £27 million! 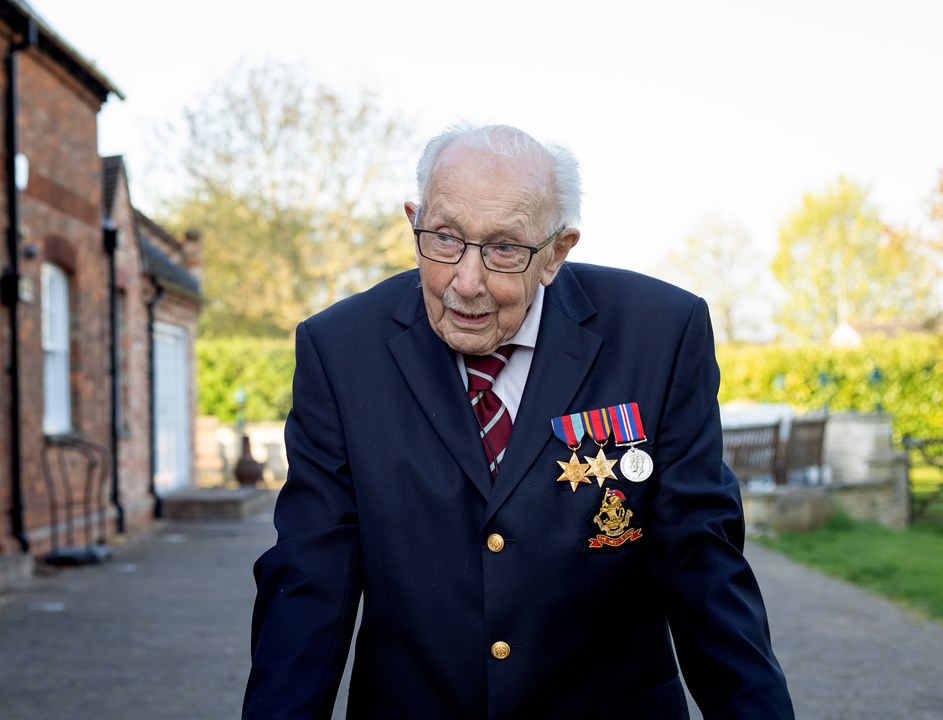 Born and raised in Keighley, West Yorkshire, and serving in the Duke of Wellington’s Regiment during the war, Captain Tom was the obvious choice to open the new Nightingale hospital which will care for coronavirus patients from the Yorkshire and Humber regions. It has been created in just a few weeks within the Harrogate Convention Centre and will be officially opened today, April 21st.

The NHS asked Captain Tom to be a ‘virtual’ guest of honour at the opening via a video link from his Bedfordshire home, in recognition of the 99-year-old veteran’s incredible fundraising effort. More than 1.3 million people have donated to his Just Giving page, helping him surpass his original £1,000 target by almost 5,500%.

Commenting on the invitation, Captain Tom said: “I’m honoured to be opening the NHS Nightingale Yorkshire and Humber and to get to thank many of the NHS workers directly. I know that having extra beds available for the sick, if needed, will be reassuring to those workers, as it would have been to me when I was on the frontline.

“I am still amazed by the amount of kindness and generosity from the UK public who continue to give despite it being an uncertain time for many. I think the amount raised demonstrates just how much we all value the dedication and sacrifices made by our NHS workers. I have fought during a war and they are now fighting in a war too.”

NHS Chief Executive Sir Simon Stevens said: “On behalf of the NHS our heartfelt thanks go to Captain Tom Moore for his remarkable fundraising efforts for NHS charities, and to the public for their generosity in supporting him and our staff.

“Inviting Captain Moore to be our guest of honour at the opening of NHS Nightingale Yorkshire and Humber is the least we can do to thank him for his inspiring service and example, and no doubt there will be further ways in which we will be able to express our gratitude.

“Just like the amazing campaign Captain Moore has inspired, the Nightingales are a symbol of how people have come together as part of a nationwide effort to prepare – should they be needed now or in the months to come – for the greatest global health emergency in more than a century.

“But of course we all hope we need to use the Nightingales as little as possible – and the thousands of other beds that hospital staff have freed up – and for that to happen we need the public to continue to stay home to save lives.”

Seven Nightingale hospitals have been set up around the country as part of a massive NHS effort to respond to the greatest global health emergency in more than a century. This extra capacity is on top of the 33,000 additional beds freed up across NHS hospitals – the equivalent of building 50 district general hospitals – and the up to 8,000 beds put at the NHS’ disposal through an unprecedented deal with the independent sector.

These measures combined mean that capacity still exists in hospitals to care for patients with coronavirus, as well as other patients who may need urgent and emergency treatment, with the Nightingales standing ready if local services need them beyond that.

Getting a good night’s rest is essential to a high quality of life, and aging shouldn’t have to mean sacrificing your precious sleep. Read on to learn common senior sleep issues and complaints, 7 tips for catching some more ZZs, and how an Acorn stairlift can help keep you in the home and bed you love.