The only British Prime Minister ever assassinated was shot dead in the lobby of the House of Commons on May 11th, 1812.

Born in 1762, Spencer Perceval was the second son from the second marriage of John Perceval, 2nd Earl of Egmont. Enjoying the privileges of wealth and nobility, he was educated at Harrow and Cambridge, where he proved a gifted scholar and also became deeply religious. 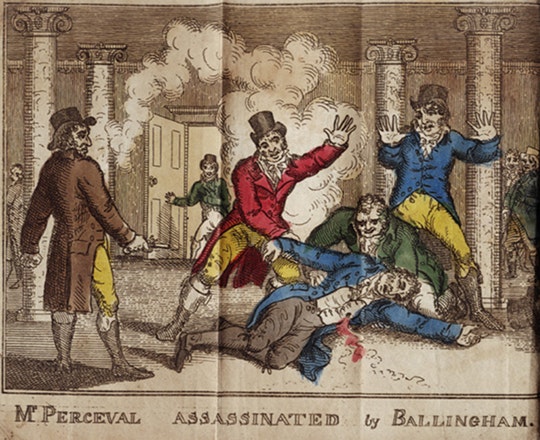 Despite the advantages of his birth, Perceval had no prospect of inheriting the family title and wealth, so needed to earn a living and chose the legal profession. By 1790, he had built a lucrative legal practice and the same year married Jane Wilson after eloping with her on her 21st birthday. Despite family objections, it was a happy marriage which would produce a dozen children over the next 14 years.

In 1796 Perceval was elected as Tory MP for Northampton, and quickly began to make a name for himself in politics. Despite his short stature and slight build, which earned him the nickname “Little P”, he was a formidable politician, promoted to Solicitor General and then Attorney General. His religious beliefs made him a fervent supporter for abolition of the slave trade and he was a close ally of William Wilberforce in securing the Slave Trade Act of 1807.

That same year the Duke of Portland formed a new Tory Government, appointing his rising star Perceval as Chancellor of the Exchequer and Leader of the House of Commons. When the elderly and ailing Portland resigned in 1809, Perceval was his natural successor as ‘First Lord of the Treasury’, the formal title which prime ministers were then known by.

But unknown to Perceval, he had a particular enemy in 40-year-old Liverpool businessman John Bellingham. He had been imprisoned in Russia from 1804 to 1809 after the authorities there held him liable for an unpaid debt run up by a business associate. Bellingham protested his innocence and repeatedly called on the British government to intercede on his behalf, all to no avail.

When he was finally released and returned to England, he campaigned for compensation for his ordeal from the government, which he held responsible for his long and humiliating imprisonment, but again his pleas fell on deaf ears. Perceval was one of several high profile figures he wrote to, seeking redress. After rebuilding his commercial career with some success in Liverpool, he returned to London in December 1811, still bent on securing compensation.

When all his efforts to persuade various government departments were rebutted, an increasingly frustrated Bellingham visited a gunsmith and bought two pistols, then had a tailor sew a large pocket inside his coat.

Bellingham’s presence in the House of Commons on Monday May 11th, 1812, caused no real concern, as he had visited several times before, sometimes asking journalists to point out particular Ministers. But that day he had a darker purpose. As Perceval entered the lobby at about 5-15pm, he was confronted by Bellingham who drew a pistol from his hidden pocket and shot the Prime Minister in the chest.

“I am murdered!” exclaimed Perceval, as he staggered forward a few paces and fell dying to the lobby floor. Bellingham made no attempt to escape, but sat quietly on a bench awaiting his arrest.

In the week that followed, Bellingham was charged, tried, convicted and hanged. There was no doubt he was the assassin – the lobby was packed with eyewitnesses – and he made no attempt to deny the charge. Nor did he show any remorse, his unshakeable certainty that he was both justified in shooting Perceval, and even entitled to do so, raising serious doubts about his sanity.

Bellingham said he had warned the authorities that unless his demand for compensation was met he would take “independent action”, to which they had only replied: “Do your worst”.

“I have obeyed them,” he said. “I have done my worst, and I rejoice in the deed.”

In the years since Perceval’s death, there have been other attempts to assassinate a British Prime Minister, most notably the IRA’s bid to kill Margaret Thatcher in the 1984 Brighton hotel bombing, but none have succeeded.