Today is Merchant Navy Day, honouring all those who have served in the British Merchant Navy and especially those who gave their lives during the two world wars of the 20th century.

The ‘Merchant Navy’ is the term for the maritime register of all seagoing merchant vessels and their crews registered in the UK. Merchant Navy vessels fly the Red Ensign, sometimes colloquially known as the ‘Red Duster’, from their stern, as opposed to the White Ensign flown on Royal Navy vessels. 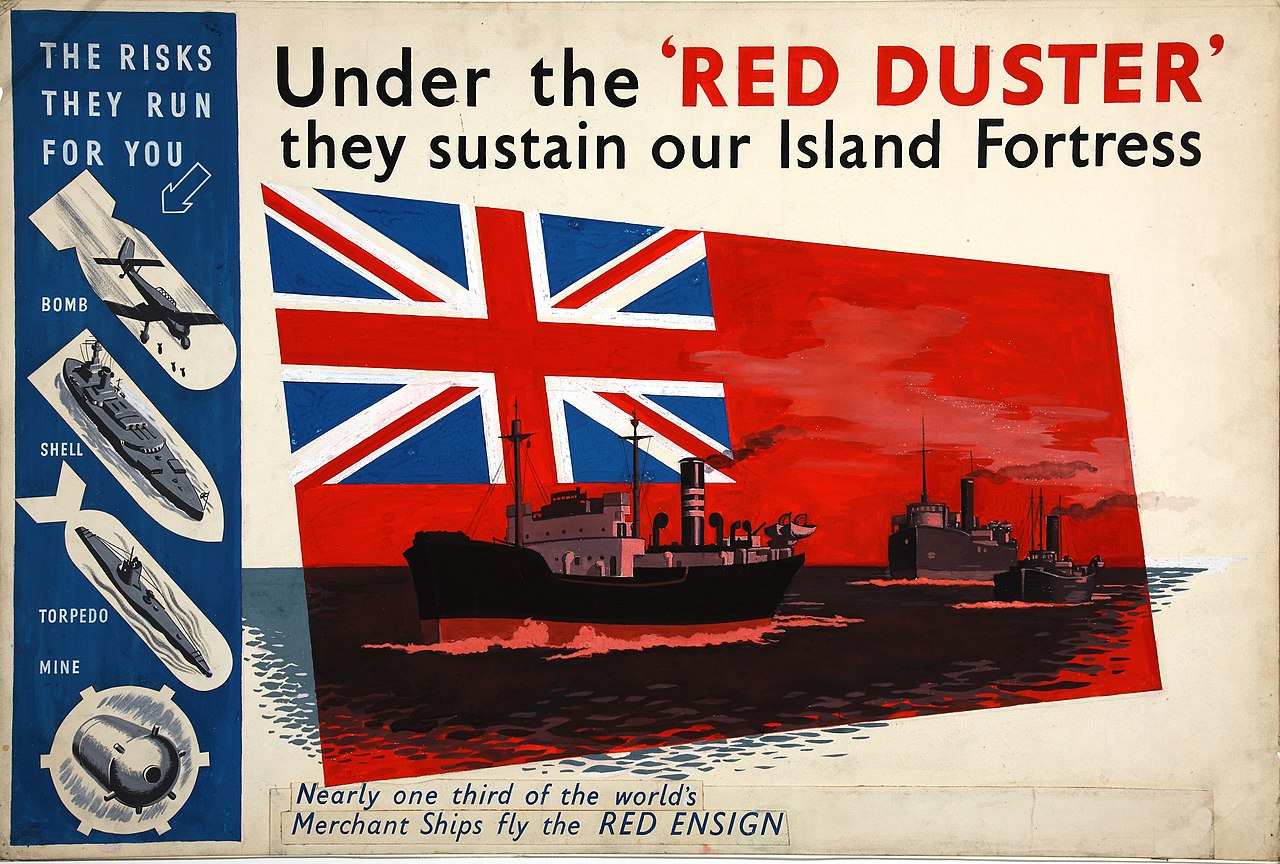 The origins of the Merchant Navy go back to the 17th century, when the earliest attempts were made to compile a register of all merchant seafarers, so that they could be called upon by the Royal Navy in times of national conflict. Those early attempts failed, as many private seafarers feared being ‘pressed’ into service for the Royal Navy.

It wasn’t until 1835 that the first register was successfully compiled. At that time, Britain had the world’s foremost merchant fleet, as an island nation trading with its colonies and other nations around the globe. Having a pool of merchant vessels and their crews to call on in times of national crisis was a huge asset to the country and its full-time military fleet, the Royal Navy.

It was during the First World War that this asset – then known as the Mercantile Marine – really proved its worth and led to it being renamed the Merchant Navy.  During the conflict, merchant seamen readily volunteered to do their bit by transporting vital cargos across the seas to and from Britain, despite the evident dangers.

Germany, with its policy of unrestricted warfare, made no distinction between merchant and military ships and considered all a target. Its fleet of new ‘U-boat’ submarines proved particularly deadly until new anti-submarine tactics came into effect. Merchant seaman paid a heavy toll, with almost eight million tons of merchant shipping sunk and around 17,000 lives lost.

In honour of that sacrifice, King George V formally granted the title “Merchant Navy” collectively to the companies whose vessels made up the fleet. A decade after the war’s end, he appointed his eldest son, Edward, Prince of Wales, as “Master of the Merchant Navy and Fishing Fleets”. He retained the title on his accession to the throne in 1936 and it has since passed automatically to his successors, George VI and the current monarch, Queen Elizabeth II.

When Britain entered the Second World War in September 1939, King George VI issued a formal message to his nation’s merchant seamen, telling them: “To each one I would say: Yours is a task no less essential to my people’s experience than that allotted to the Navy, Army and Air Force. Upon you the Nation depends for much of its foodstuffs and raw materials and for the transport of its troops overseas.”

It was indeed a hard war for the Merchant Navy, which lost 2,828 ships ­– around two-thirds of the total allied tonnage lost – mostly to German U-boats, aerial bombing and mines. More than half of UK’s total merchant fleet at the outbreak of the war was lost during it, with more than 35,000 merchant seafarers losing their lives.

Despite these heavy losses, the shipping convoys successfully brought enough food and equipment to a besieged Britain to ensure its survival through the early years of the war, with the situation only beginning to ease following America’s entry into the conflict in December 1941. Its own equivalent of the Merchant Navy, the ‘Merchant Marine’, would also sustain heavy losses in the remaining years of the war, especially in the Pacific.

Today Britain’s shipping fleet is much smaller, yet the Merchant Navy still plays a vital role. It was clearly demonstrated during the 1982 Falklands War when several merchant vessels were used as troop carriers and hospital and supply ships as part of the task force sent to the South Atlantic.

Members of the Merchant Navy qualify for the same decorations as the armed forces and several have been variously awarded the Victoria Cross, George Cross, George Medal and other decorations for gallant and distinguished conduct in the service of their country. Merchant Navy Day was established by the UK government in 2000 and is observed every year on September 3rd, the anniversary of the start of the Second World War.